Over the past year or so, the FDA has introduced reforms of the various medical device approvals processes to make them more efficient. These changes do not seem to have had much of an effect. Just 15 first-time premarket approvals have been granted by the agency in the first half of 2018, down sharply from 24 this time last year (see analyses below).

The silver lining here is that the route used for innovative devices that pose a lower risk to patients, known as de novo clearance, is seeing a lot more action. So far this year 19 devices have reached the US market via this route, showing its enormous popularity since the FDA changed the rules in 2012 to make it simpler for companies to use.

It was surely going to be hard for the FDA to maintain the scorching pace of medical device approvals it has set over the past few years, despite its attempts, and the rate has indeed slowed. If the second half of the year sees the agency approve devices at the same rate as the first, the industry can expect 32 PMAs and humanitarian device exemptions (HDEs) in 2018 – the lowest annual total since 2013.

Both PMAs and HDEs are awarded to high-risk devices, which the FDA designated class III. HDEs can only be given to devices intended for conditions affecting fewer than 8,000 patients per year in the US. To reflect the difficulty of carrying out clinical trials for these disorders, there is a lower burden of proof of effectiveness. 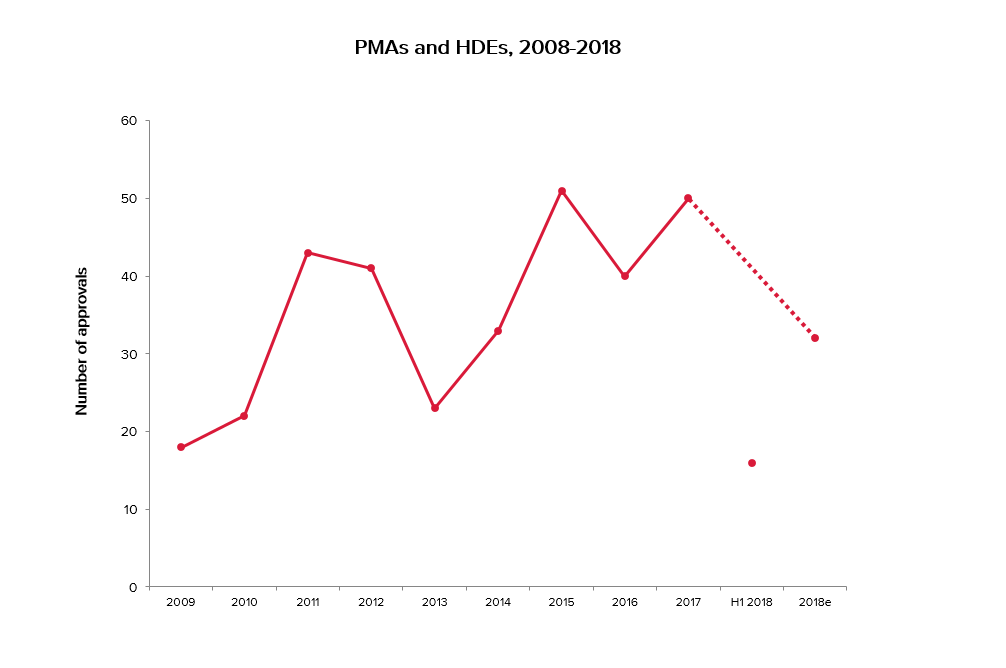 It is hard to say what is behind this drop in class III approvals. No major changes to regulatory processes that would make it harder to register devices have been implemented – indeed the converse is true, with the FDA falling over itself to ease devices’ passage along the various regulatory paths.

In March, for example, it reclassified integrated continuous glucose monitors as moderate risk class II devices, allowing their clearance via the 510(k) route rather than the more stringent, more expensive and slower PMA pathway. This will have had a tiny effect on the approvals numbers, since it enabled the clearance of Dexcom’s G6 iCGM as a de novo, not a PMA.Senseonics’ implantable CGM, however, was kept as a class III product; its PMA came in June.

In May the agency issued an “innovation challenge” aimed at encouraging the development of devices to diagnose or reduce opioid addiction, promising “enhanced interactions” with FDA staff during the development of the proposed product, as well as breakthrough designation without submission of a separate application. Although the initiative is too late to have an effect on H1 approval numbers, it could impact future approvals.

More wide-ranging reforms had been signalled in January, with draft guidance aimed at determining the minimal amount of information necessary for assuring the safety and effectiveness of new devices. This is to allow innovative devices to reach patients more efficiently, the agency said.

These initiatives might make themselves felt in the coming months, of course. So far they seem to have done precious little to aid developers.

At least the agency’s turnaround time for class III devices has not fallen. The 50 PMAs and HDEs granted last year took an average of 13.8 months to come through; this year’s 16 took 14 months on average.

At more than two years, the approval time for cardiology devices is slower than usual – the six-year average is just 17 months. This is due to the lengthy approval of Angel Medical Systems’ AngelMed Guardian implanted heart monitor system, which took more than three years to get its PMA.

Since this is a fairly common-sense approach, allowing low-risk devices to get to patients sooner, this increase is to be celebrated. Provided the FDA does not loosen the rules so far as to allow unsafe products onto the market, it would be good for the device industry to see this trend continue. 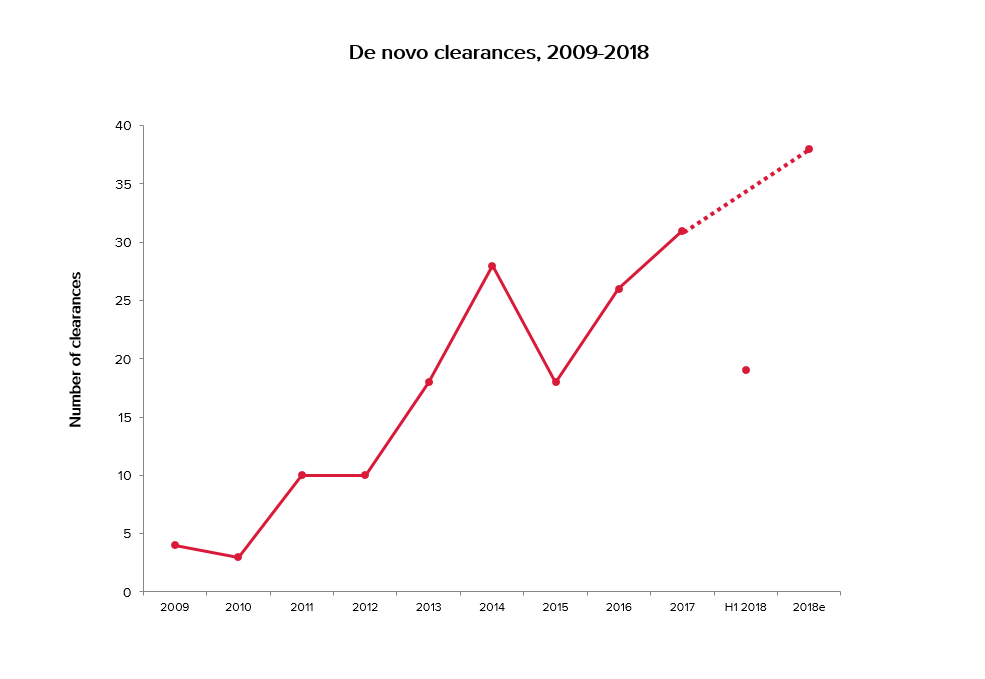 Tandem comes out the winner of the diabetes device approvals

2015 could see most device approvals for a decade

A year of two halves for US approvals

Merck & Co makes the accelerated approval pathway its own