The buttoned-up biotech, recently valued at $7bn, has finally unveiled plans to go public. But investor appetite for new issues has taken a knock. Does Moderna’s move signal fears that the IPO window is closing?

Why would one of the most highly valued private drug developers decide to float just when it looks like investors are falling out of love with biotech? Perhaps Moderna’s executives and investors have been persuaded that, unless the company goes out now, they might have to wait for another couple of years before the opportunity arises again.

Evidence exists to suggest that the biotech IPO market has peaked: the median “bump” in valuation that companies receive when they move from private to public hands has been in decline since the middle of the year, EvaluatePharma data show. The market sell-off that hit global stock markets in October will have played a role here, but fears are growing that the biotech sector is facing a more prolonged slump.

In recent weeks the Nasdaq biotechnology index has dropped sharply from record highs reached over the summer; global markets tumbled in October as investors fretted about climbing interest rates and President Trump’s trade wars. As a high-risk sector biopharma never fares well in volatile times, and concerns are growing that jittery financial markets could finally call time on the bull run that has been charging ahead since the beginning of 2016.

The chart below shows how valuation bumps, reflecting the new public value of a stock versus the average at which private investors had bought it, have been tempered since hitting a peak in early 2018. This analysis only looks at listings in the US, and was calculated using the average pre-IPO share price, a figure provided in most S-1 documents, and the final flotation price.

The chart clearly shows the last market correction in 2016, as well as how quickly the appetite for biotech IPOs recovered. The data for the second half of 2018 are not complete yet, but certainly seem to suggest that bankers are unable to secure the uplifts they enjoyed earlier this year. Of course this must be kept in perspective, and this graph paints a far-from-disastrous image – a 140% median bump is better than the 100% that was being achieved two years ago.

The question is how far and how quickly this analysis will continue to trend downwards. Backing up this finding is the second analysis, looking at the “haircuts” being required to get IPOs away, which shows how final float prices differ from the initially proposed range. Discounts were virtually unheard of earlier this year, and this graph supports the notion that equity investors are becoming harder to convince. 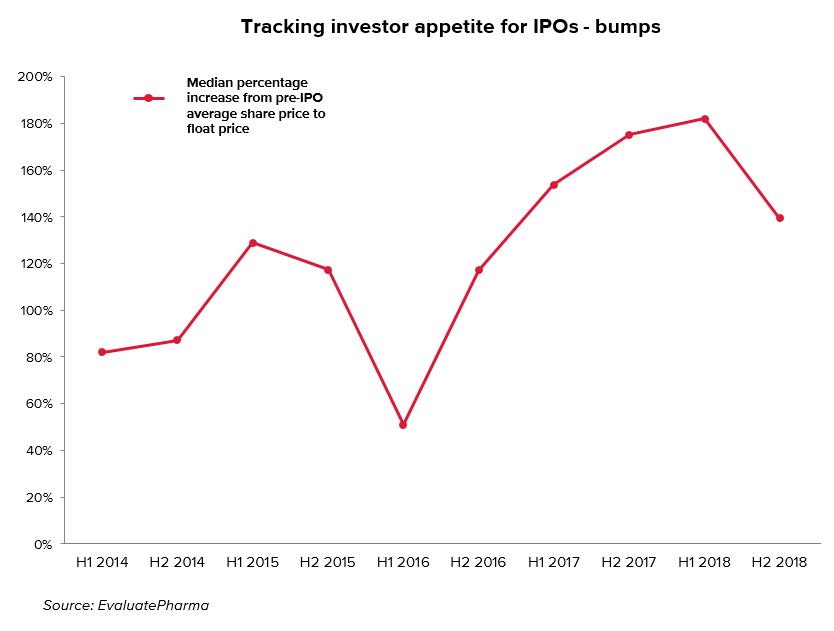 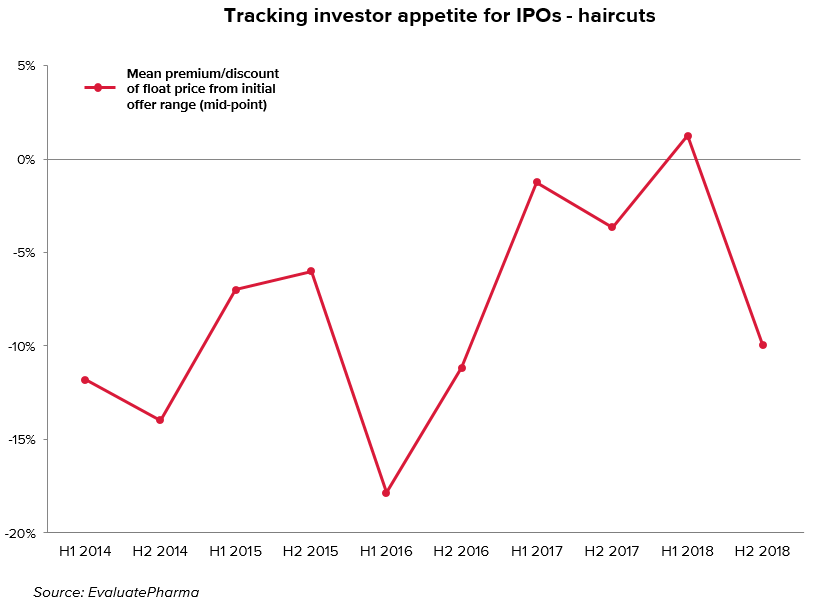 So what does all this mean for Moderna? All that has been announced so far is its desire to raise $500m. The company was last valued at $7bn, and presumably bankers are hoping to achieve a substantial uplift on this.

Based on clinical progress alone this could be difficult: the pipeline chart supplied as part of the S-1 does not suggest that notable clinical progress has been made in the past few months, and substantive proof of concept for the company’s mRNA approach remains some way away. Moderna’s most advanced asset is the Astrazeneca-partnered AZD8601, a cardiac therapy that should yield phase IIa data next year, according to clinicaltrials.gov.

But then lack of supportive evidence has not held Moderna back so far. The company has raised more than $2bn from investors and partners, and currently has $1.2bn sitting on its balance sheet, the S-1 filing shows.

How long Moderna takes to price the offering, and then get the float away, will provide an important insight into how hard bankers have had to work to get it off the ground. The company will presumably be hoping to price next week, and get the flotation away before the Ash medical conference, the next big event on biopharma’s horizon, which starts on November 30.

The S-1 lists a staggering 11 banks as underwriting the offering, so there is little chance that this flotation will fail at the outset, though the analyses suggest that Moderna would have had an easier time a few months back. It is not inconceivable that bankers have advised the company to go for it while it can.