In 2018 the lowest amount has been spent on mergers and acquisitions in the medtech sphere than in any year since 2013. And the fewest deals – just 186 – have been closed than at any point since 2009, in the wake of the global financial crisis.

The total value of M&A deals last year came to $27.4bn, a precipitous decline from 2017’s figure of nearly $100bn. And underlining medtech’s lack of interest in large, transformative deals is the fact that four of the top 10 transactions were private equity buys. 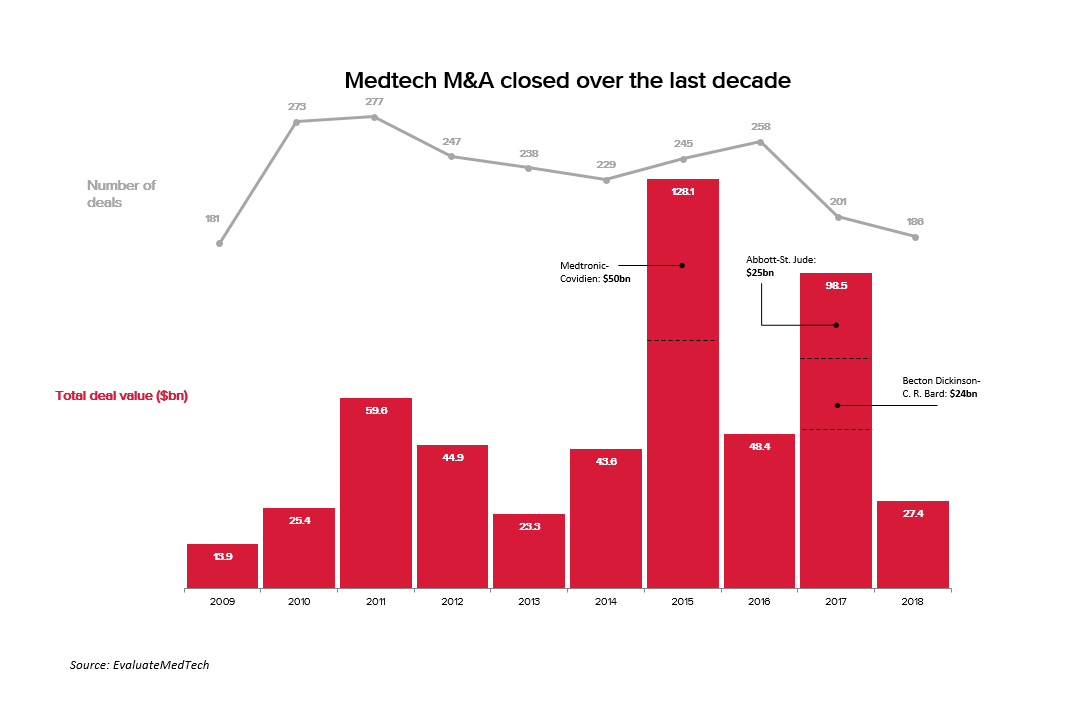 Private equity firms seem to be stepping into the gap left by the larger medtechs, who are put off by high valuations and an increasing focus on portfolio synergies when choosing which groups to buy. Roche’s two billion-dollar-scale deals are examples of this. The cancer diagnostics specialist Foundation Medicine and the electronic health record analysis company Flatiron Health both had technology that dovetails with the Swiss group’s oncology ambitions.

But medtech’s choosiness does not mean it is doing more smaller deals in place of fewer large ones.

While the number of mergers worth more than $1bn has dropped sharply, from 19 in 2017 to just seven last year, the number of smaller tuck-in deals has also fallen. 34 acquisitions known to be worth less than $100m closed in 2018, compared with 50 the year before. This analysis only includes those deals with disclosed values, so the real numbers will be different, but it is hard to argue with the trend showing a decreasing number of smaller deals since 2010.

By contrast, the number of deals in the $100m-1bn bracket has remained remarkably steady in the same time period, and 2018’s figure is squarely mid-range for the decade.

It is true that merger trends are cyclical to some degree – a year in which several megamergers close will be followed by a quieter one as buyers are preoccupied and the number of targets reduced. But that is hardly the whole story behind the startling drop in both the number and scale of transactions from 2017 to 2018.

There are signs that closing M&A deals is getting harder when there is a significant technology overlap. The private equity-backed merger of the hearing aid makers Widex and Sivantos has been put on hold, with the groups in November withdrawing an application for the European Commission to approve the deal. And Fresenius Medical Care’s proposed acquisition of its fellow dialysis group Nxstage Medical has been delayed to allow the US FTC to sign it off. Both deals are expected to close in the coming year.

Another reason is that the device sector remains awash with easy venture funding, meaning that the smaller private groups that wish to put off a trade sale can do so with relative ease.

Private equity has also been flash with the cash. Four investment groups – Platinum Equity, Altaris Capital Partners, Veritas Capital and TPG Capital – feature as buyers in the list of 2018’s top 10 largest M&A deals. There were no such deals in the top 10 in 2017 and only one the year before. Two of the groups bought were subsidiaries divested by large conglomerates, and a third, Analogic, was in real trouble when Altaris swooped on it.

Arguably this presages another round of similar deals in around five years’ time, with private equity’s business model usually requiring an investment exit horizon in that timeframe.

Meanwhile, there are two big reasons to hope for an uptick in activity to come: Siemens Healthineers and GE Healthcare. The first of these two huge imaging companies has already split from its pan-industrial parent and the second is about to, and part of the reasoning behind these moves is that the more specialised groups could be freer to buy. 2019 could be big.