As takeover hopes build, 2018 provides a low bar to beat

Takeda gave biopharma’s M&A bill a big boost in 2018 but to see just how slow the year was, take a look at deal volumes.

The quick-fire takeouts of Tesaro, Celgene and Loxo Oncology over the past few weeks might cause many to forget just how quiet the biopharma M&A scene was last year. Make no mistake, it was slow: even in the post-financial crash years the sector managed to sign more transactions than in 2018.

Valuations were lower in these previous sluggish years, of course, an issue that many blame for holding back negotiations more recently. However those that think the deal desert is finally coming into bloom again should remember that the last three years all opened impressively, but then went on to wilt. 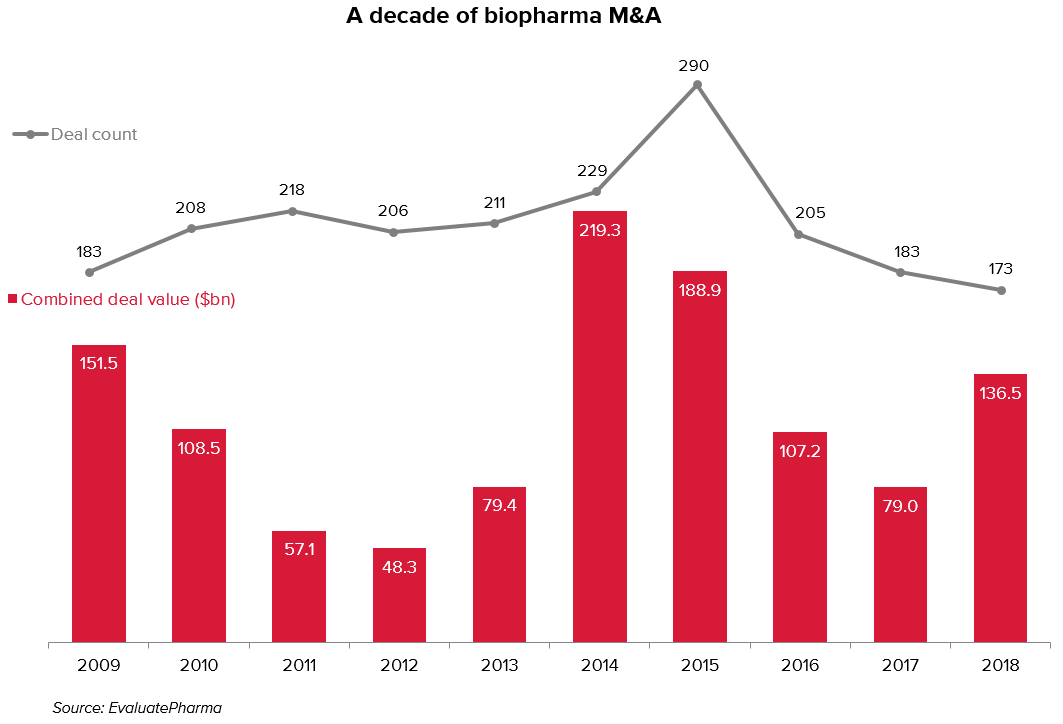 A look at historical data from EvaluatePharma, above, illustrates the extent of the dealmaking slowdown in 2018. Big ticket mega-mergers inflate the dollars spent every year or so, while the transaction volume indicates activity levels. This analysis looks only at companies developing human therapeutics, buying other developers of these medicines – arguably the highest-risk end of the sector – and excludes subsectors like medtech or genomics.

The graph below takes a closer look at the last six years, and shows that the sector has been in the current slow period since early 2016. Given that the 2014/15 bubble had seriously deflated by then, this is not surprising, and it is clear that outside of a couple of stand-out transactions, underlying M&A activity has been muted.

It is also notable that, more recently, activity seems to have been focused in the early months of the year. The desire to win column inches throughout the high profile JP Morgan Healthcare conference, which takes place every year in January and winds up tomorrow, is probably a factor here. Last year’s takeover of Shire actually emerged in the first quarter, but was only formally accepted in May. And as with the Actelion and Baxalta deals of the preceding years, the transaction represented the big news of the year, with dealmaking slowing in the following months.

Of course $20bn-plus takeouts will always be relatively rare events. It is the smaller transactions that investors would like to see happening more regularly, of both public and private drug developers; a pick up here would help justify the huge amount of money that has flown through the venture capital and IPO markets in the last couple of years, even as the M&A scene has remained moribund.

Talk of a resetting of valuations is spurring hopes that this year’s opening bang will not immediately fade to a whimper. The removal of Celgene, one of the sector’s most enthusiastic dealmakers, from the market is something of a negative: the biotech struck two of 2018's biggest deals.

But there are plenty of other motivated buyers out there. The $74bn that Bristol-Myers Squibb has pledged for Celgene and Eli Lilly’s $8bn swoop on Loxo Oncology means that 2019 has already bested 2017 on total deal value; it will not take much more for last year’s tally to also be beaten.

The metric to watch, however, is the number of transactions being announced in the coming months. Only this will indicate whether underlying demand really is picking up, outside of these headline-grabbing buyouts.