The commercial potential of last year’s new medicines suggests another strong year of productivity from biopharma, while a further analysis reveals the arrival of two very novel chemical compounds.

The US regulator might have rubber-stamped a record number of novel therapies last year, but 2017 remains the banner year for commercial potential. This is not to say that 2018 was disappointing: last year’s cohort of new medicines is forecast to be selling $24bn by 2023, signalling that biopharma’s R&D engines remain in good condition.

This annual analysis, which looks at the relative quality of each year’s cohort of novel medicines, shows how 2018’s entrants represent the continuation of a strong run for the sector. Drawing on EvaluatePharma’s consensus of sellside forecasts, fifth-year sales have averaged at $23.4bn over 2014-17, bang in line with 2018’s total.

It will take some going to beat 2017 on sales potential. That year saw the arrival of Roche’s multiple sclerosis treatment Ocrevus and Sanofi/Regeneron’s autoimmune antibody Dupixent, two mega-blockbusters that gave a big boost to the topline number that year.

With no end in sight to the protracted US government shutdown, perhaps biopharma watchers should be braced for a downturn in this analysis this time next year. 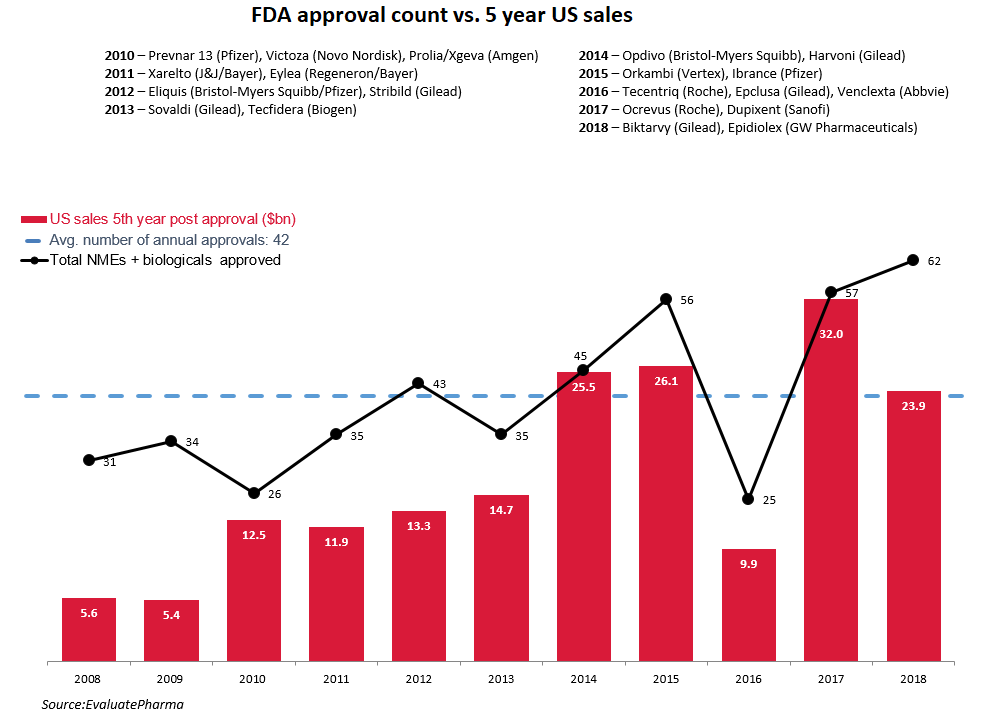 To carry out the analysis CAS analysts used a compound’s framework – which is composed of ring systems and linkers – to assess its chemical innovativeness. The number of compounds that share a given framework indicates the extent to which that region of the chemical space has been explored.

The relative innovativeness of each newly approved novel molecule can then be ranked, as below.

To conduct this analysis CAS, a division of the American Chemical Society, mined its collection of chemical compounds, the CAS registry, which has been curated by scientists from disclosures in journals, patents and other public sources over the past 150 years. This collection covers all fields of chemistry and related sciences, not just biopharma. 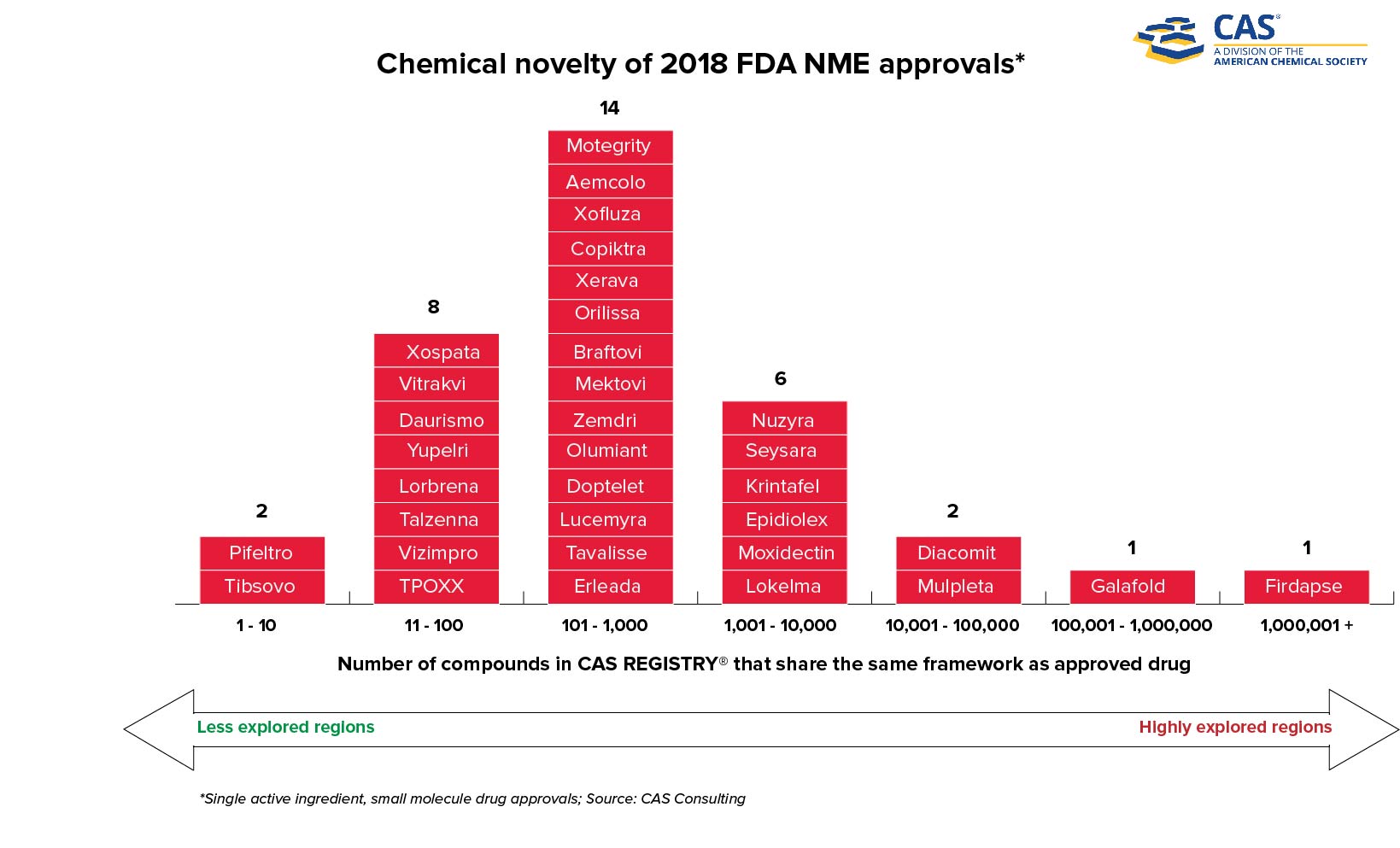 According to CAS Consulting, Tibsovo and Pifeltro are examples of what could be termed radical innovation. Tibsovo shares a framework with only six other compounds, all of which have been disclosed by Agios over the past several years.  Similarly, Pifeltro shares a framework with nine other compounds, all of which were initially disclosed by Merck & Co.

“This suggests that drug-hunters are pushing the boundaries and searching unexplored regions of the chemical space to find active small-molecule compounds,” says Todd Wills, Managing Director of CAS Consulting.

At the other end of the scale are examples of more incremental innovation; these compounds join many other publicly known compounds that share an existing framework. For example Firdapse shares a framework with almost 1.4 million other compounds disclosed by over 10,000 different organisations over the past 125 years, according to CAS Consulting.

Firdapse, approved to treat a rare autoimmune condition, looks to be an outlier for a good reason. The potassium channel blocker, known generically as 3,4-diaminopyridine phosphate, had been used unlicensed – and very cheaply – for years until Biomarin in Europe and Catalyst Pharmaceuticals in the US sought to get it approved. Catalyst’s approval was also beset with delays; Biomarin has been on the market since 2010.

Galafold’s developer, Amicus, also spent much longer getting the treatment for Fabry disease to market than initially intended; the alpha galactosidase chaperone went into clinical trials back in 2006.

Tibsovo, by contrast, only entered the clinic in late 2015, and it seems logical that “younger” compounds will tend to lie towards the unique end of this type of analysis. It also seems unlikely that novelty as measured here would be tightly correlated to sales potential, as this is more determined by indication and marketing strategy, though to draw any conclusions about this a more expansive analysis would be required. Watch this space.