US regulators on track for another strong year

If the US drugs regulator picks up the pace in the second half of the year, 2018 could be a bumper year for novel medicine approvals.

A nurturing regulatory environment is one of biopharma’s strongest tailwinds, and there are few signs of this petering out. The FDA green-lit 21 novel drugs in the first half of 2018, approving groundbreaking medicines like the marijuana-derived Epidiolex, and Aimovig, a migraine prophylactic with a new mechanism of action.

With a packed pipeline of projects awaiting a verdict in the second half of the year the outlook for 2018 as a whole is bright. Still, US agency staff will need to pick up the pace if this year’s tally is to match some of the more plentiful recent approval years (see tables below).

If the first-half run rate is repeated, making 42 novel approvals for 2018, the year’s tally would fall below three of the past five years. Positive sentiment around the FDA means that, should this scenario unfold, any apparent dip would probably be put down to timing issues rather than a sign of growing conservatism from the agency.

Overt attempts by the FDA to foster a collaborative relationship with industry, as well as some controversial decisions deemed very lenient, mean that drug developers and investors are growing ever more optimistic about US regulatory outcomes. 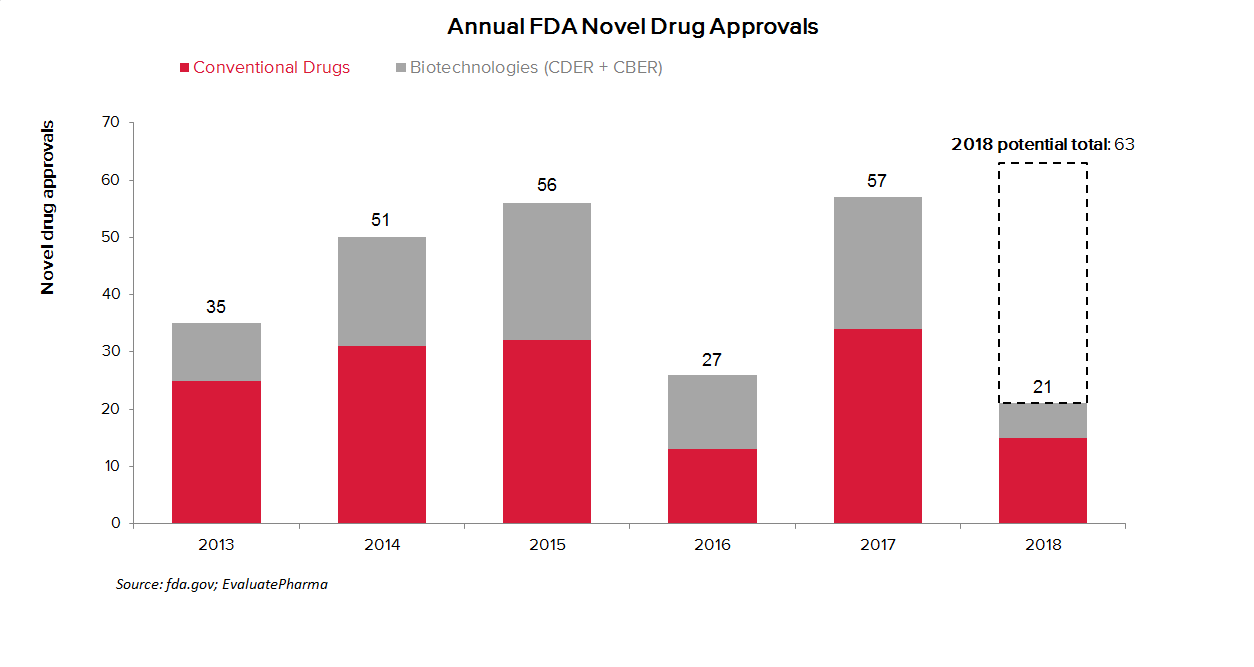 The long queue of assets awaiting approval makes it unlikely that 2018 will disappoint, however. EP Vantage has identified 42 novel projects that could receive a decision later this year – though the ever-present risks of setback and delay mean that the final number is far from certain.

One of the biggest approvals on the horizon is lanadelumab, Shire’s latest contender in the crowded hereditary angioedema space. Analysts reckon this could become the company’s third-biggest seller by 2024 – consensus sits at $1.6bn according to EvaluatePharma – and this asset was no doubt a major draw for Takeda.

Meanwhile, approval of elagolix would be a huge relief for Abbvie, which has struggled for years to get the endometriosis project to this stage and was hit by another delay in April when the FDA pushed its decision back to the third quarter.

Also facing scrutiny will be competing amyloidosis therapies from Alnylam and Akcea/Ionis, patisiran and Tegsedi; the projects are among the first RNAi therapies to be submitted to the FDA, and their progress will be watched with interest.

Agios, meanwhile, has much riding on the verdict for its new acute myelogenous leukaemia treatment Tibsovo – the net present value of the asset is equal to half the company’s $5bn market value, suggesting that a negative decision would be taken very badly by investors.

As always, the regulatory year will deliver some unexpected wins and some unforeseen setbacks. And, while the climate is favourable, biopharma and the FDA will still need a fair wind to deliver such a long list of hopefuls.