Approvals of high-risk devices drop as de novos take off

Changes at the FDA have altered the device approval landscape, with the de novo route now the most popular.

At first glance, the fact that the US FDA has only approved 35 novel medical devices via the PMA and HDE routes last year is rather alarming: it is a huge drop from 2017’s figure of 50. However, this fall was matched by a corresponding increase in FDA clearances of low-risk devices.

The US regulator is seeking to encourage device makers to use the de novo route for their innovative products, and it seems to be working: for the first time the number of de novos exceeded the number of approvals by the more established PMA and HDE pathways. This newer approval pathway is speeding the path to launch for devices – but perhaps not as much as might be expected.

PMA (premarket approval) is the means by which high-risk, or class III, medical devices – those that sustain or support life or are implanted – are approved. HDE (humanitarian device exemption) is awarded to a device if it treats a condition that affects fewer than 8,000 individuals in the US per year. De novos are used for safer class I or II devices, those that would usually receive market clearance via the 510(k) route, but which are so unlike previously approved devices that a predicate cannot be found. 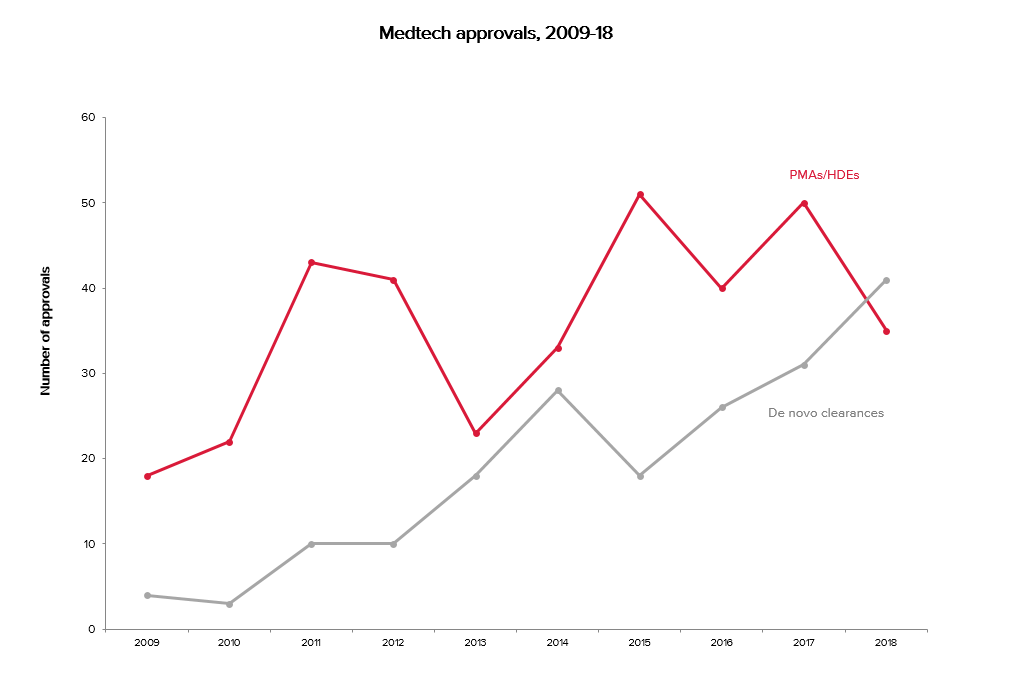 The de novo pathway is designed to be a fast and simple route by which medtechs can get innovative devices to market, and its growth in popularity suggests that this aim has been achieved. Previously developers of low-risk devices for which a predicate was unavailable generally had to submit a PMA; now they can go straight to the de novo route (The FDA's latest push to speed medtech approvals, August 28, 2014). Dexcom, whose G6 continuous blood glucose monitor is pictured above, was one such.

However, while de novos are approved more rapidly than PMAs, the difference is not enormous. The de novos granted in 2018 took an average of 13.4 months to traverse the FDA, whereas PMAs and HDEs, despite the riskier nature of the devices here, only took around six weeks longer.

The more interesting question is what might happen in the future. In the short term the US government shutdown will curtail the FDA’s device approvals. Unsurprisingly, no innovative devices have been approved so far this year, though PMA supplements and predicate-based 510(k)s – the means by which design tweaks or me-too devices are cleared – are trickling though.

When the agency does get back on its feet, though, the de novo pathway in particular could see a lot more action. The FDA wants to redouble its efforts to ensure that unsafe devices are caught before reaching the market, and in a series of announcements that coincided with an investigation into dangerous implants by the International Consortium of Investigative Journalists the FDA said that it would tighten regulations.

Its actual concrete proposals were somewhat tepid, but in future device makers might have to use more recent predicate devices in their 510(k) submissions. The agency expects that this will push more groups towards the de novo route (The FDA’s proposed changes to device regulation are thin on detail, December 11, 2018).

With nearly a month of 2019 already gone with no innovative devices approved, the coming period could be quiet as companies aiming to take their devices to the US are forced to wait. And, with the shutdown on one hand and tightening rules on the other, the record set for PMAs – 51 in 2015 – might stand for some time to come.

Device approvals drop, but the FDA has a plan

The FDA takes its foot off the pedal