Oncology continues to reign in the licensing world

Other therapy areas take a back seat as the pharma industry continues to focus on cancer-focused licensing deals.

If there is a trend for pharma companies to pick licensing deals over M&A when it comes to restocking pipelines, there is also a distinct preference for the type of assets on pharma’s shopping list of external candidates.

An analysis of licensing trends over the past seven years using EvaluatePharma data shows that oncology remains the most attractive place for companies to place their bets. Between 2010 and the first half of 2018 almost $18bn was spent on up-front payments for cancer treatments, outstripping other therapies by at least a factor of three. 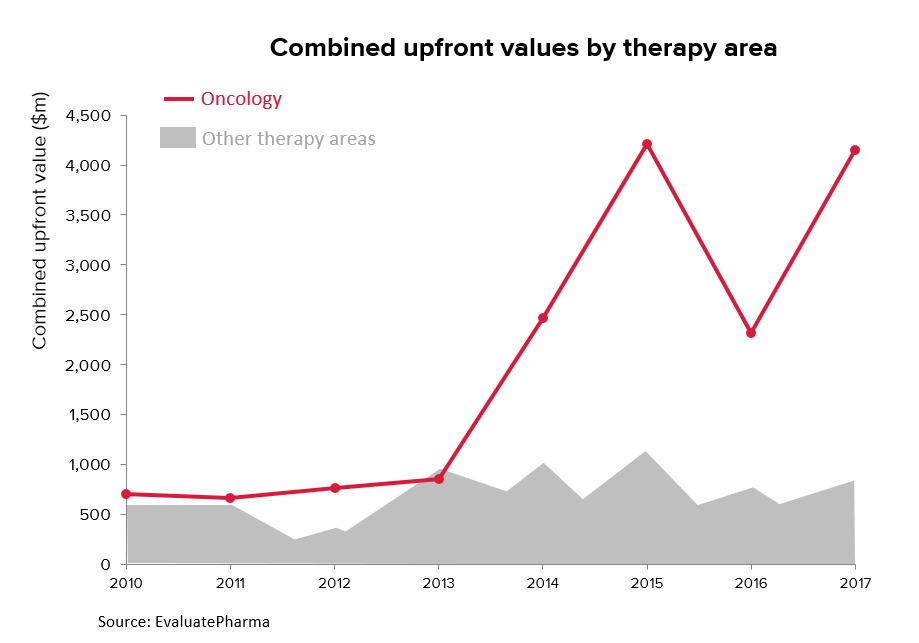 The popularity of the indication is shown by the sharp rise in the valuation of oncology assets, with deal activity peaking in 2015, the height of the biotech boom.

Some of the heat in the space is being stoked by the search for products to use in combination with other drugs, as companies seek to extend the utility of individual products or mechanisms of action, to overcome issues of tumour resistance.

Additionally, as pharma companies continue to eschew M&A in favour of licensing, competition for novel oncology assets is increasing, further bumping up valuations and accelerating the number of deals done at early, but cheaper stages of development.

There also appears to be no sign of the number of oncology deals slacking off, with 22 agreements already struck in the first six months of 2018, with up-front payments totalling $1.82bn. Given that the second half of the year is usually stronger than the first, 2018 could equal or exceed the $4.15bn 2017 total.

The half-year tally in oncology was bolstered by Bristol-Myers Squibb’s deal with Nektar, worth $1.85bn up front, and Merck & Co’s more modest $300m agreement for Eisai’s Lenvima.

It should be noted that this analysis only includes partnering deals where an up-front payment was disclosed. Deals without financial terms, or where only a total deal value was announced, have been excluded.

Oncology clearly dominates the licensing landscape, but there have been significant deals in the second-biggest indication, CNS, with the number and value of deals rising since 2016.

However, the difference between oncology and CNS is starkly illustrated by the fact that the biggest up-front payment for a CNS deal over the past seven years was the $350m Biogen paid to Ionis in April to expand their strategic collaboration to develop antisense drugs for a range of neurological disorders. This figure is small beer compared with Merck’s $1.6bn up-front oncology deal with Astrazenca over Lynparza, for example.

As small as it was comparatively, the Biogen/Ionis deal helped CNS up-front licensing payments in the first six months of 2018 to hit $905m, eclipsing the total up-front payments for the whole of 2017 in this sector.

Given the huge unmet medical need, it is not surprising that some of the biggest deals in the CNS space have been struck around Alzheimer’s disease. In 2017 Biogen licensed in Bristol-Myers Squibb’s BMS-986168, a monoclonal antibody targeting tau, for an up-front fee of $300m.  And in 2010 Merck paid $289m up front for Alectos Therapeutics’ preclinical asset MK-8719, in progressive supranuclear palsy.

Aside from oncology and CNS, where the volume of deals allows some insight into annual changes in licensing activity, it is harder to draw any conclusions around trends from other therapy areas as individual deals can massively skew results. Celgene’s $710m up-front payment for Nogra Pharma’s mongersen in 2014 is a case in point; aside from this transaction no other gastro-intestinal licensing deal managed to command an up-front fee bigger than $250m.

While the majority of licensing is concentrated in a handful of indications, one thing the overall trends show is that pharma’s appetite for licensing shows no signs of abating.