Licensing deal activity holds up in first half of 2018 as biopharma continues to stay away from takeovers.

Mergers and acquisitions in biopharma might have fallen off a cliff, but a look at licensing activity indicates that companies remain enthusiastic deal makers. An analysis using EvaluatePharma data shows that in the first half of 2018 up-front payments from licensing hit $3.4bn, up slightly on the comparable period in 2017.

The number of deals in the first half of this year also increased, from 61 to 72, with oncology remaining the most sought-after therapy area for partnerships. Traditionally the second half of the year is stronger than the first so, if the the current pace is kept up, 2018 could even match the highs seen in 2015. 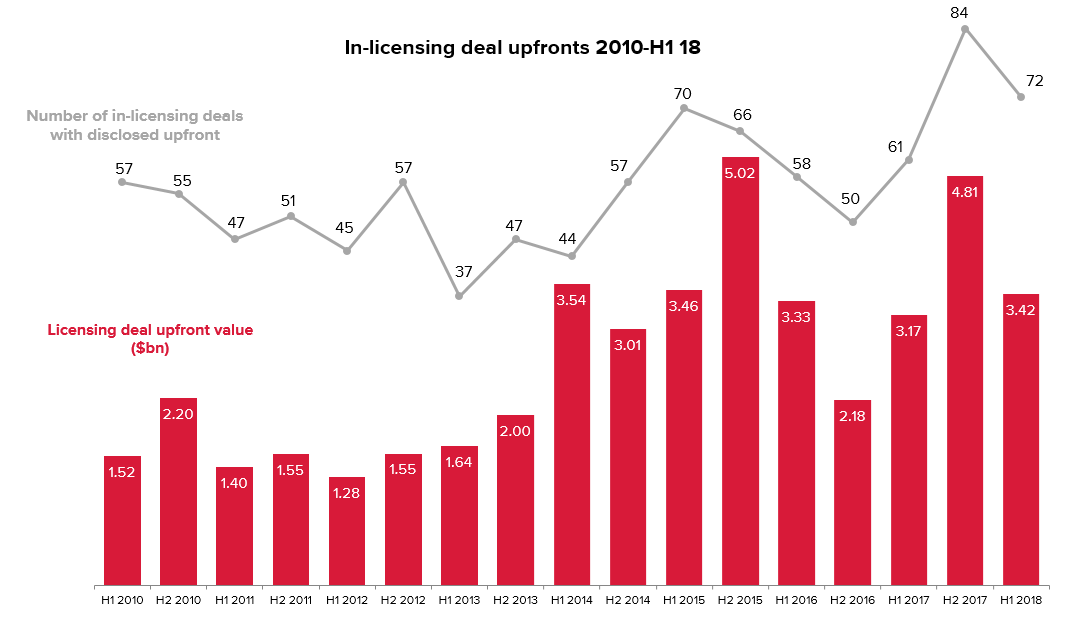 The analysis above looks at partnering deals where an up-front price was disclosed. Omitted were those without financial terms available or where only a total deal value was announced – these so-called bio-dollar deals are often vastly inflated by long-term milestones that in many cases will never be paid out.

As such, the deal count numbers here will understate overall biopharma licensing activity to a certain extent.

Pharma’s reluctance to swallow companies whole these days has much to do with the healthy valuations sported by many smaller drug developers, especially in areas of high competition such as immuno-oncology.

Additionally, the vast amounts of venture cash available and amenable public markets mean that, rather than having to sell out, smaller biotechs can hang on to their products and their independence, further fuelling the drift towards licensing over M&A.

One of the starkest proofs of this trend is the fact that, had it not been for Takeda’s $64bn takeout of Shire, half-year M&A would have fallen to levels not seen since 2013. And this is despite US tax breaks that many believed would spark a wave of mergers.

Big pharma’s reluctance to splash out is shown by the fact that industry giants have shelled out $16.3bn on licensing up-fronts so far this decade. Celgene and Allergan were the only non-big pharma names that made the top 10 when it came to up-fronts. 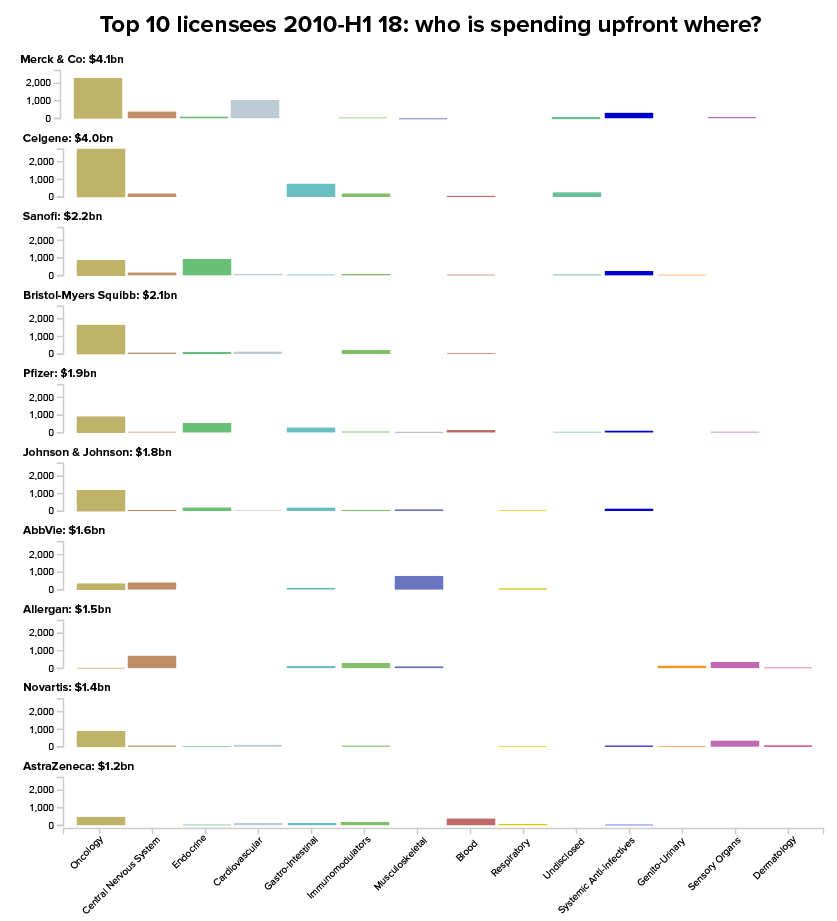 Leading the charge in licensing spending over this time is Merck & Co, which coughed up $4.1bn in up-front fees between 2010 and the first half of 2018. A large portion of this spend was the $1.6bn it handed over for a share of Astrazeneca’s cancer therapy Lynparza. The group also paid Bayer $1bn for the cardiovascular drug Adempas.

Merck is only marginally ahead of the serial licensee Celgene, which has showered $4bn on new clinical partners since 2010. The company is known for punching above its weight when it comes to striking licensing deals, and outspent the next biggest licensee, Sanofi, by almost double.

Celgene has been looking for new products to replace its best-selling drug, Revlimid, which is nearing the end of its patent life, though a string of setbacks means that its spending spree could be coming to an end.

Another reason that Celgene's bill is so high is its licensing focus on oncology, an area where valuations are at their highest and competition at its fiercest (Buyers of cancer assets fan the licensing deal market, September 7, 2017).

Bristol Myers Squibb’s $1.85bn up-front payment to Nektar Therapeutics for NKTR-214, the biggest in 2018 and the largest since 2000, is a graphic example of white-hot oncology asset prices.

While Bristol and Merck have been using licensing to expand the utility of their existing products, others like Sanofi and Abbvie are looking to reduce their dependence on pipeline heavyweights that are coming to the end of their patent life. However, it could be argued that Sanofi's $650m bet on Regeneron's PD-1 asset cemiplimab will not help given how far it is behind the rest of the competition.

he licensing boom will continue for the foreseeable future.