Like the rest of biopharma investors, corporate VCs love oncology

Novartis scatters its VC seeds widely by leading rounds across a variety of therapy areas, although oncology still represents a big share of its funding activity.

Some corporate venture funds back biotechs for a strategic position, and others to feed the innovation ecosystem. Either way, the money flow from these big pharma divisions has followed that of investment in general over the past few years – namely, into oncology research.

That said, the corporate VCs have taken their feet off the oncology accelerator, an analysis by Vantage shows. Making a surprising surge since 2015 is corporate VC interest in companies working on central nervous system projects, perhaps reflecting the risky nature of drug development in this area and the need for patient investment.

This analysis measures activity by the number of rounds in which corporate VCs have participated by therapy areas for the decade ending 2018. There are signs that in general big pharma has backed away from this avenue of investment, as ready money is available from traditional VCs and the valuations of many assets continue to surge (Are the big corporate venture arms retreating?, February 18, 2019). 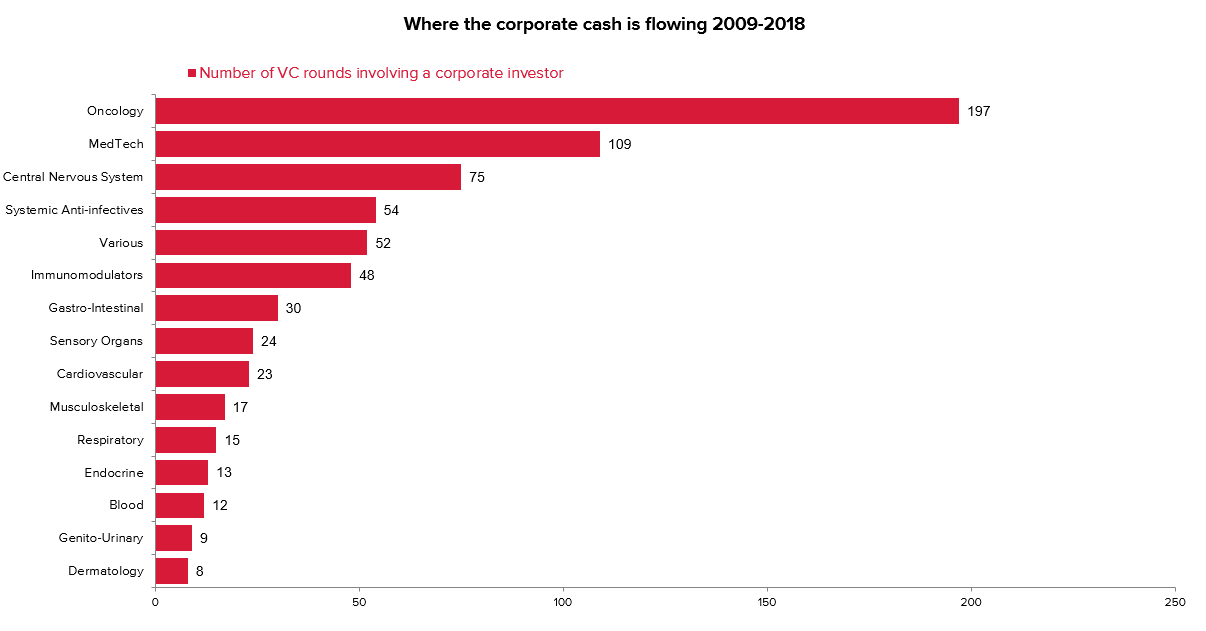 Corporate VC funding in oncology has followed a similar pattern: the sector hit its peak in 2016 with 27 corporate VC rounds, before this fell to 23 in 2018. This is by no means a massive retrenchment – oncology is seen as a fruitful place to put R&D money as regulatory and commercial barriers remain low.

And cancer did dominate corporate venture investment during the 10-year period analysed, with the big names participating in 197 rounds, more than double that of the next biggest biopharma therapy area. Nevertheless, corporates might be starting to view other therapy areas as more attractive as investors of all stripes have crowded into cancer research.

Enter CNS. This is a high-risk therapy area owing to failures of trials of projects targeting pain and mental health disorders, and thus biotechs working in this area generally need more time and private money to reach milestones like licensing deals and initial public offerings. 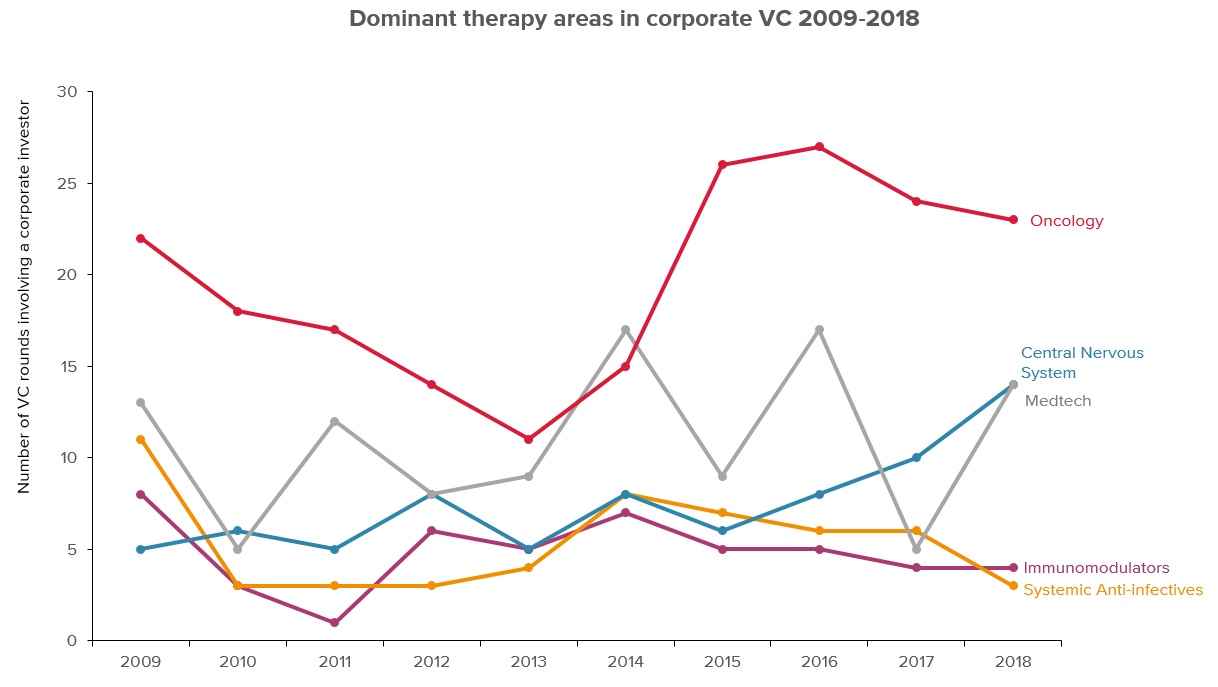 As oncology rounds backed by big pharma VCs have receded, CNS rounds have increased steadily, from six in 2015 to 14 in 2018. The CNS-focused companies that received big pharma venture backing in 2018 included Cadent Therapeutics, which has a lead project in essential tremor and is backed by Novartis; Minoryx Therapeutics, which has a project in adrenoleukodystrophy that earned Roche’s support; and Alector, a dementia and Alzheimer’s specialist whose crossover round included Abbvie, Amgen and Lilly. Alector went public earlier this month.

Big pharma venture divisions have shown declining interest in companies working in immunomodulators and systemic anti-infectives. In the case of the former, the big disease areas like rheumatoid arthritis are fairly well served with agents approaching the end of their market exclusivity. In the case of the latter, while governments have provided incentives to develop infectious disease drugs the fact that these agents that are seldom used remains problematic commercially.

Novartis, the most prolific corporate venture investor of the past decade, has only led four rounds in the anti-infectives area out of a total of 43. By comparison, the group led 13 funding rounds for private oncology companies. 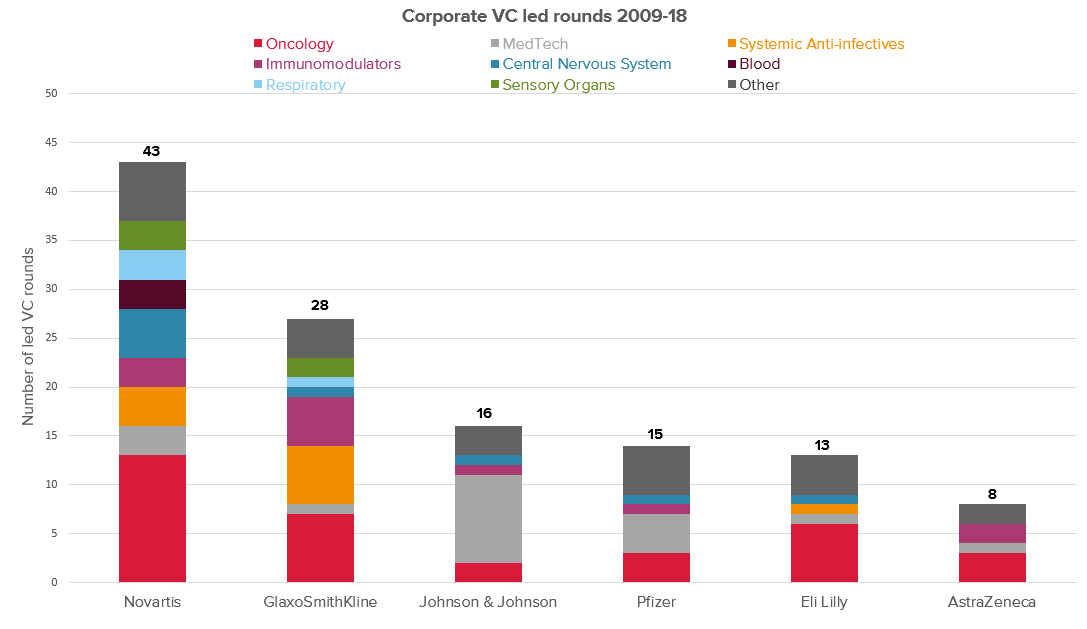 Novartis spread the wealth, however, leading venture investments across a broad spectrum of areas including respiratory, blood, sensory organs and CNS. In breadth, the Swiss group is matched by Glaxosmithkline’s SR One venture arm, which led at least one funding round in all of the same areas, but was less prolific, leading only 28 rounds in total.

Johnson & Johnson was the third-biggest leader of VC rounds over the past decade, although it has focused more on medical devices thanks to its DePuy Synthes and Ethicon medical technology subsidiaries. The New Jersey-based conglomerate led 16 rounds in the 2009-18 period, nine of which were medtech; only two were in oncology.

Some biopharma observers have lamented the sector’s heavy investment in oncology because it neglects other therapy areas with unmet needs. While the corporate venture arms have been a part of this trend, signs that CNS-focused companies are getting more love should be welcomed.