While consensus forecasts can be used as an indicator of which biopharma projects could make it big, a dive into the late-stage pipeline reveals that the sellside often disagrees about these candidates' prospects.

This analysis looks at the minimum and maximum sellside analyst predictions used in creating the EvaluatePharma worldwide 2024 consensus sales forecast. It concerns the projects in phase III trials or filed for approval that have the heftiest forecasts attached.

These sales figures all bank on a drug making it to market in the first place – something that is never guaranteed, as demonstrated recently by the failure of Biogen’s Alzheimer's project aducanumab. This had previously been ranked by EvaluatePharma as one of the industry’s prospective biggest sellers. 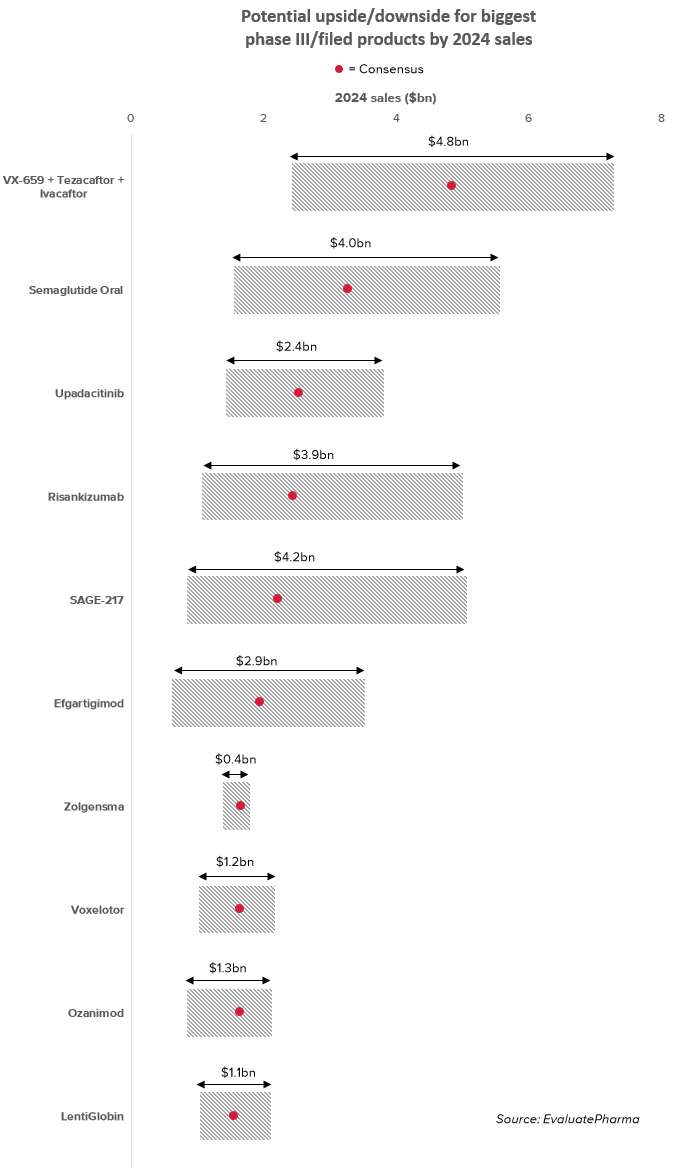 Lack of clarity around pricing is perhaps the most critical factor in the dispute about the eventual sales figures of Vertex’s cystic fibrosis triplet of VX-659, tezacaftor and ivacaftor. The triplet is forecast, by consensus, to become the biggest seller out of all current phase III or filed projects, with sales of $4.8bn in 2024.

But it is also the most divisive of these top drugs, with some analysts seeing as much as $2.4bn either side of consensus. With little competition in the indication, and positive results in phase III, the only question remaining is the triplet's cost. The lack of other options available would, in theory, allow Vertex to push for a high price, but there has already been backlash from payers and the US cost watchdog Icer against Vertex's current cystic fibrosis treatment prices.

Sage Therapeutics’ oral depression treatment SAGE-217 also has a wide spread. While the 2024 consensus stands at $2.2bn, several analysts reckon the project will significantly outperform this – by up to 131% in the case of the most bullish forecast.

However, success in major depressive disorder (MDD) is the key to unlocking full value. Reading through from PPD to MDD is difficult; things should become clearer with phase III data in MDD, expected in late 2019 or early 2020.

Other notably wide forecast ranges involve Abbvie’s psoriasis treatment risankizumab and Novo Nordisk’s oral form of semaglutide. With the latter this is likely due to analysts’ views on how the drug will fare against Lilly’s Trulicity. Novo's chances would be greatly helped if it managed to show a cardiovascular benefit.

Meanwhile, uncertainty around risankizumab’s sales is likely to be down to outstanding questions around access and pricing, as well as how well the IL-23 antagonist can differentiate itself from Johnson & Johnson’s Tremfya.

In contrast to most other products in the analysis, the sellside so far seems largely in agreement about the prospects of Novartis’s Zolgensma. The gene therapy aimed at the treatment of spinal muscular atrophy is forecast to sell $1.6bn in 2024, according to EvaluatePharma's consensus, with a deviation of only around $200m to either side.

This is a remarkably small range compared with many others, and might be due to a very well-defined patient population. The status quo could come under pressure after Novartis last week disclosed the deaths of two Zolgensma study subjects, though one was deemed unrelated to the treatment.

As a previous Vantage analysis shows, even with an approval in hand it can be difficult to get a clear view of how a product will perform as questions around pricing, market access and key trial results make way for worries surrounding line extensions, competitive threats and patent expiries.