The number of late-stage assets in the hands of the industry’s behemoths is shrinking, and this can only put more pressure on companies to do deals.

Biotech develops and big pharma buys; the industry model has long been thus. But an analysis by Vantage suggests that this is changing.

The charts below show that pharma’s late-stage pipeline is dwindling, while there has been a jump in the number of phase III assets in the hands of big biotech. And this surge is even more pronounced among smaller companies.

The total number of pivotal projects at big pharma groups has shrunk across the board, so it is not as if in-house assets are picking up the slack. If the heavy hitters cannot develop drugs themselves, perhaps it is time for them to get their chequebooks out again to restock their pipelines. 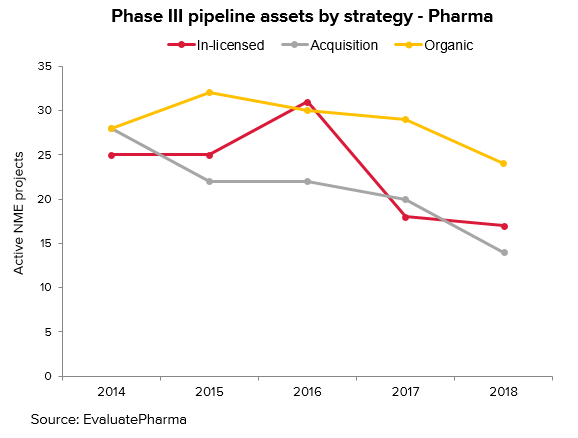 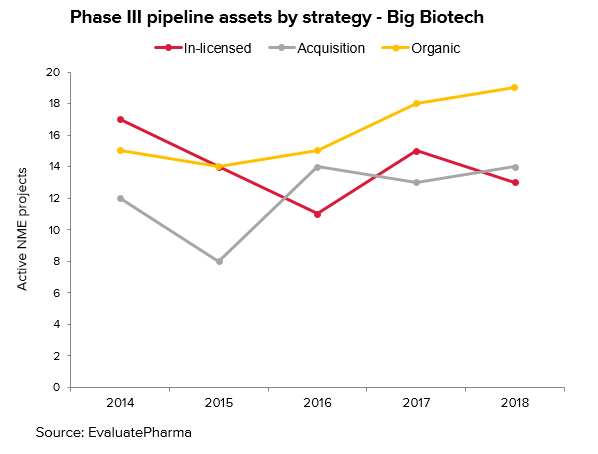 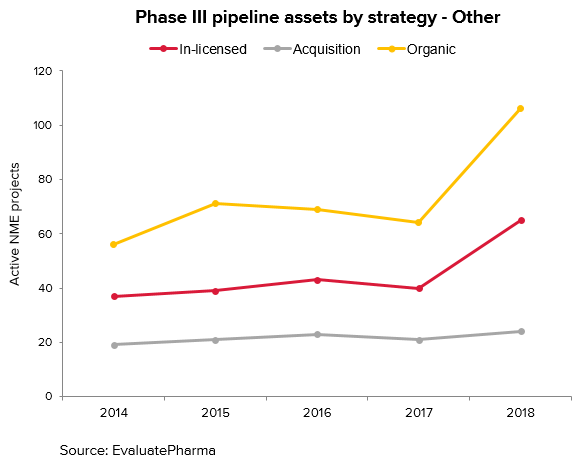 However, in the current moribund M&A market this might be easier said than done. Bigger groups continue to bemoan the overblown valuations of their would-be targets, while smaller companies, flush with cash, are happier than ever to go it alone.

Indeed, biotechs are now in the driving seat during discussions with potential partners or acquirers, Richard Weaver, chief executive of the contract research organisation Xenogesis, argued at Wednesday's Biointegrates conference in London, during a panel discussion on exit strategies.

Mr Weaver, who previously had a long stint at Astrazeneca, contrasted the current situation with that of 15 years ago, when big pharma held all the cards.

Until this power balance shifts again – or pharma accepts the new reality – the stalemate looks set to continue.

Perhaps bigger groups are going for quality over quantity. Another recent analysis by Vantage found that products gained via acquisitions were responsible for a growing proportion of US drug sales, far outstripping the contribution from those developed organically (If you want blockbuster sales, buy them in, April 29, 2019).

This analysis involved already approved products, so there will be a lag before it becomes clear whether this trend holds for projects currently in phase III. If the current lull in acquisition activity translates into declining sales this could push big pharma back towards the deal-making table.

There are still deals to be done, but acquirers are increasingly looking for more reasonably priced, earlier-stage assets. For example, Merck’s takeout of Peloton this week cost the bigger group a cool $1bn, but in making its move before Peloton went public, Merck might have saved itself money in the long run.

This move towards earlier deals could suggest something else, of course: that the phase III assets still belonging to smaller groups are not worth acquiring. Many biotechs have struggled with solo launches, though some, like GW Pharmaceuticals and Insmed, have made a better fist of the job.

While venture money remains plentiful, and smaller players are not under pressure to sell out, these groups could end up hanging on to even more late-stage projects.