As the US shutdown rolls on, blockbuster launches line up for 2019

A look at the biggest potential drug launches this year reveals a long list of blockbusters from the likes of Alexion and Abbvie. But what impact will the shutdown have?

Vantage’s annual look at biopharma’s bonniest new babies – as predicted by sellside analysts – has Alexion’s Soliris follow-on, Ultomiris, as the biggest new product to launch this year. With approval already in the bag the company will be focusing on meeting sales forecasts of $3.4bn by 2024, a preoccupation that certain rivals would love to be getting on with.

Meanwhile, any updates from the FDA on how the shutdown will impact ongoing reviews will be keenly awaited by the likes of Abbvie, Novartis and Johnson & Johnson. All are hoping to get green lights in the early months of 2019 for what could become substantial new products. What the situation means for those with more recently submitted applications is also unclear for now.

The below analysis is based on consensus forecasts from EvaluatePharma, and products that the sellside predicts will launch in a major market this year.

Alexion received earlier-than-expected approval of its Soliris follow-on, Ultomiris, just before Christmas. But in reality this product’s launch will be a 2019 story, and as a result the rare disease therapy tops this year’s list of biggest new arrivals.

Another product in this line-up is already on the market – Kala launched its optical pain product, Inveltys, last week and must now hit those lofty sellside numbers; the company’s market cap is only $215m so investors apparently do not share the same optimism.

The rest of the assets above remain subject to regulatory scrutiny and, at least in the US, timelines are far less certain than in previous years due to the ongoing government shutdown (Topping 2018 drug approvals will be a tall order, January 15, 2019).

Those projects that were filed close to year end or are due to be filed soon are detailed at the bottom of the list, and these remain 2019’s wild cards for now.

Abbvie, which is hoping to launch its new rheumatoid arthritis contender, upadacitinib, this year, has not said whether the FDA has accepted its filing, while Novartis had previously guided to a December filing for its new macular degeneration contender, brolucizumab. It is unclear whether the company made it before the government shutdown.

Aimmune has told investors that the application for its peanut allergy project, AR101, submitted just before the shutdown began, is in limbo, although a tweet from the agency’s commissioner, Scott Gottlieb, got some asking what the real situation is here. Allergenic products like AR101 are not covered by a user fee programme, Mr Gottlieb noted, so the FDA would not have funding to continue its review during a shutdown.

A note to reporters: There are a lot of hardships created by the shutdown, especially for patients and consumers who rely on the products and protections FDA helps provide. But there are also some parties who are using the excuse of the shutdown to advance misleading narratives.

However this situation plays out, these three projects were always going to cut it fine to launch this year. Astrazeneca and Fibrogen’s roxadustat is also included here as some sellsiders have sales starting in 2019, though this looks to be a very long shot.

Notably, many in the sellside still have numbers implying a launch this year for Celgene’s ill-fated MS project ozanimod and liso-cel or JCAR17, the much-delayed CAR-T asset the company acquired with Juno.

What looks to a be a pivot to a new indication for the experimental cell therapy means a 2019 launch is almost out of the question, while ozanimod has yet to be re-filled. In any case, both are subject to a contingent value right (CVR) negotiated with Bristol-Myers, which will only pay out if they launch before 2020; a cynic might surmise that the pharma giant has little motivation to step on the gas. 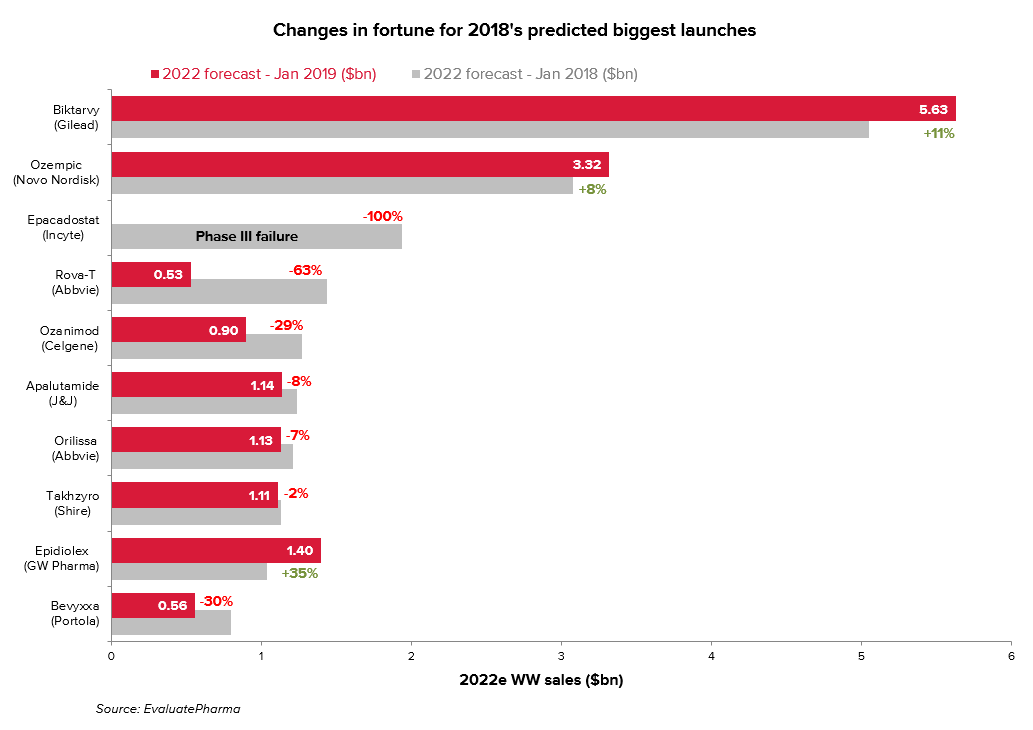 A look at the progress of last year’s biggest hopes shows that even these high-profile projects are not immune to setbacks. Incyte’s epacadostat was arguably 2018’s biggest blow up, and the chances of the immuno-oncology project reaching market are now very slim.

This year’s hopefuls are mostly already at the regulatory stage, so they would have to experience an unforeseen data or technical issue to be seriously derailed. Of course this can also never be really ruled out.

Looking back at April’s data digging and analysis