The first quarter of this year saw more venture funding raised by medical device groups than any other period since 2010.

First, the good news: the first quarter of this year saw more venture funding raised by medical device groups than any other period since 2010 – with the exception of the record-breaking first quarter last year. If the remainder of this year keeps this pace up, 2018 will see more VC cash raised than ever before.

The downside is that the number of deals has fallen yet again – and this process will continue. “There is an increasing trend to having larger syndicates with large amounts of money going in upfront to give the company the opportunity to execute on the strategy,” says Tim Haines of venture group Abingworth. “Having a significant quantum of capital is important.”

Venture funds pumped $3.3bn into private medtech groups in the first six months of 2018, across 90 rounds. This means the average deal size was $37m – knocking the previous record, the average of $25m per deal in the second half of last year, into a cocked hat. 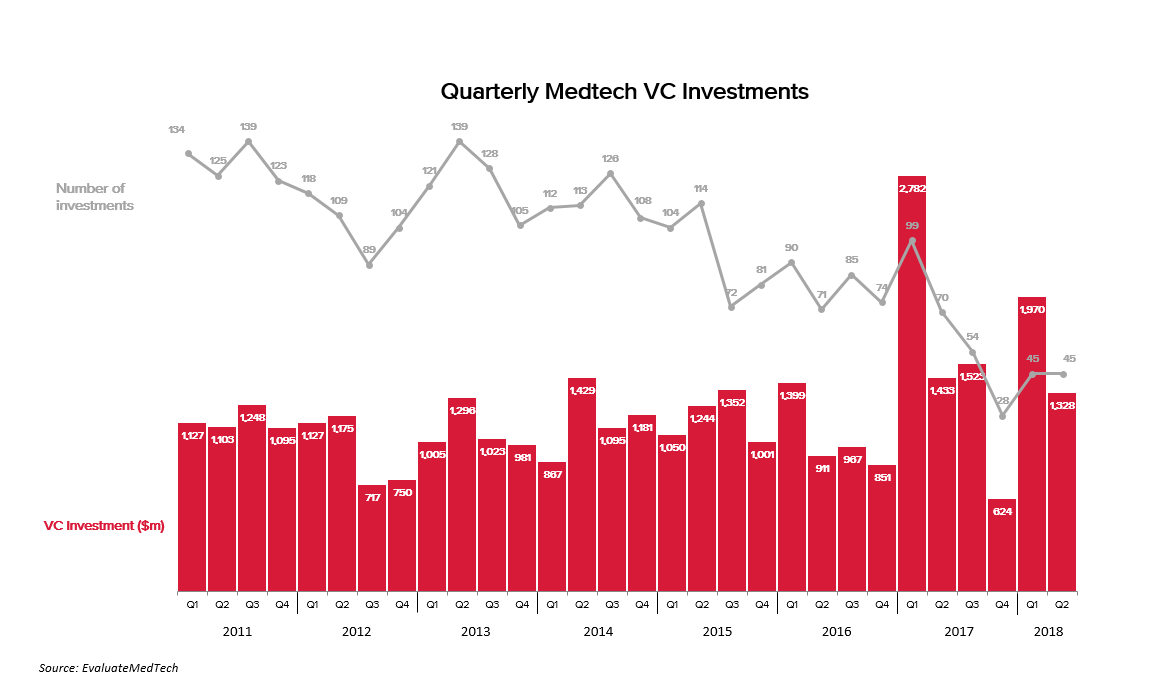 “Medtech over the last 10 years, in a venture sense, has got relatively harder,” says Mr Haines. “Reimbursement has become much more of a challenge than it was historically, but particularly there are fewer acquirers and they tend to wait to acquire until the acquisition is … accretive.”

IPOs are also a tougher prospect for device makers than biotechs, he says. If a medtech company wants to float successfully it has to already have around $30-50m in revenue; biotechs need not be commercial at all.

All of which means that the average time to exit a medtech group is nearly twice as long as for a biotech company. Those venture investors who are willing to risk a punt are under no illusions about what is required of them: they must fund clinical trials, navigate regulatory processes and reimbursement, and build a sales force. They must therefore choose their portfolio companies with great care.

“The need to get a real innovation, a real breakthrough technology, has increased, to generate good returns. The days of me-too or incrementalism – if they ever really existed in venture capital – I don’t think are around today,” says Mr Haines. “I do think we’ll see more capital and fewer, higher-quality, deals.”

As EP Vantage’s analysis shows, the number of acquisitions in the medtech sphere has dropped markedly this year (Five-year low for medical device mergers, July 10, 2018). Mr Haines says this is not too great a worry for VCs, since “enough high-quality M&As” still get done. Acquirers, like VCs, are trying to pick the winners.

Chief among those winners is Grail, the Illumina spin-out hoping to bring its sequencing knowhow to bear on the diagnosis of cancer. In some ways it is rather surprising that Grail was willing to settle for just $300m in its series C round in May; after all, an SEC filing in January disclosed that the company’s series B raised $1.2bn in total. The second tranche of that B round tops the table.

Diagnostics companies, particularly those employing next-generation DNA sequencing, are often appealing for VCs, their products being linked closely to computing power and thus relatively cheap to develop. Three of the companies in the top 10 table are sequencing companies – the fourth-placed company, Helix, is also an Illumina spin-out.

And at least three of the companies in the table are thought to be unicorns. Grail and Heartflow’s recent rounds put their reported valuations at $3.2bn and $1.5bn, respectively, according to Forbes, and Jefferies analysts confirmed Oxford Nanopore Technologies’ valuation of $1.5bn to EP Vantage earlier this year (Spotlight – Oxford Nanopore, the disruptive unicorn gunning for Illumina, April 9, 2018).

One new development in the device industry might alter the venture landscape somewhat in future: the splitting up of conglomerates. With Siemens Healthineers already independent from its parent and GE Healthcare and Alcon to follow, these groups will be more free to buy in the technologies they will need to stay competitive in their more specialised niches. And with more M&A comes more VC deals – theoretically, at least.