Krystal gets more skin in the epidermolysis bullosa game

There is no cure for the rare inherited skin disorder epidermolysis bullosa, but several groups are vying to get a gene therapy to market. Among them is Krystal Biotech, whose KB103 – unusually a topical contender – is set to yield phase II data in the first half of the year.

Promising results from two patients in the phase I portion of the same study sent Krystal’s stock up 24% last October. If the company can repeat this performance in phase II it hopes to start a pivotal trial in the second half of 2019.

Still, we are still talking about very small patient numbers: the phase II portion of the phase I/II Gem-1 study has enrolled just four subjects. And Krystal is behind its nearest epidermolysis bullosa (EB) gene therapy rivals, Abeona Therapeutics and Fibrocell Science, in terms of timing.

Fibrocell hopes to start a pivotal trial of its candidate, FCX-007, in the first half of this year, while Abeona plans to enrol the first subject into the phase III study of its project, EB-101, by mid-2019. The latter had originally been slated to start last year, but was delayed while Abeona set up its own manufacturing facility.

All three candidates target the dystrophic variety of the disease, caused by mutations in the COL7A1 gene. Treatments that provide a functional copy of this gene are designed to spur the production of collagen VII, which holds the layers of the skin together. EB sufferers have extremely fragile skin that is prone to extensive blistering, and can have a reduced life expectancy owing to increased risk of skin cancer.

Krystal’s chief executive, Krish Krishnan, told Vantage that KB103 could have a convenience advantage over EB-101 and FCX-007, which are both autologous therapies that involve removing cells from the patient, transfecting them with the gene, and delivering them the site of the patient’s wound.

KB103, meanwhile, is an off-the-shelf gel that uses a herpes simplex virus (HSV), which Mr Krishnan described as an “underappreciated” vector. Krystal is exploiting the virus’s naturally high affinity to skin cells (herpes is spread by skin-to-skin contact).

“When KB103 comes into contact with skin cells the vector is delivered into the nucleus of the cells. Then the cell machinery helps convert that DNA into RNA and secrete the protein,” Mr Krishnan explained. 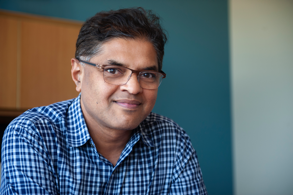 The vector uses an attenuated HSV that does not replicate or integrate with a patient’s DNA, something Krystal claims could make its project safer than other gene therapies. It does mean that KB103 would not be suitable for a “once-and-done” approach but this does not matter, according to the chief exec, as the gel can be easily reapplied.

In any case, he claimed that all gene therapies targeting EB would have a limited duration because of the natural turnover of the collagen VII fibrils, which have a half-life of around one to three months: “Once they’re gone you need a way to reproduce collagen VII.”

A drawback with HSV is that it is too big to be given intravenously, the reason why Krystal has focused on skin diseases.

There is already a precedent for HSV-based therapies with Amgen’s approved oncolytic virus, Imlygic. However, this has been a commercial disappointment, not helped by the need for intratumoural injection.

In Gem-1 patients receiving KB103 effectively act as their own controls, with some wounds receiving the therapy and others a placebo gel. In the two phase I patients, KB103-treated wounds closed within two weeks, while those receiving placebo took longer to close or did not close at all (Krystal gets a flying start in epidermolysis bullosa gene therapy, October 17, 2018).

In phase II the four subjects will receive KB103 on two wounds, and placebo on one. The primary efficacy endpoints are change in wound surface area, and time to and duration of wound closure.

The gene therapies are not the closest EB projects to the market. Amryt’s AP101, a topical gel containing the plant extract betulin, is set to yield pivotal data this year, but hopes are not high after the group recently had to increase the size of the Ease trial.

Mr Krishnan does not see AP101 as a rival to KB103, saying Amryt aims only to treat the symptoms of EB rather than addressing its cause. But EB-101 and FCX-007 could become more serious competitors.

Krystal gets a flying start in epidermolysis bullosa gene therapy

Fibrocell gets a reality check