Freeline Therapeutics had hoped the dose-confirmation B-Lieve trial would pave a path to pivotal development for its delayed haemophilia B gene therapy, FLT180a. But questions remain in the wake of data presented yesterday at the ISTH meeting in London. The results, in just three patients, looked promising in terms of Factor IX, which reached normal levels. However, the company also disclosed that, since the May 23 data cut-off, two of these patients had a decrease in FIX levels alongside a “mild and transient” increase in liver enzymes. Such increases can be seen when the body’s immune system reacts to the viral vector, but Freeline had hoped to combat this with prophylactic steroids and tacrolimus. Freeline said the affected patients still had FIX levels above baseline and had not experienced bleeds, but more details are needed to ascertain whether FLT180a’s effects are durable. Freeline is well behind the haemophilia B gene therapy leader, Uniqure and CSL's etranacogene dezaparvovec, which is due an FDA decision before year-end. The second cohort of B-Lieve is testing the same dose as the first, 7.5x1011vg/kg, but investors have seen enough: Freeline’s already-diminished stock fell 19% yesterday, for a 95% decline since the company's July 2020 IPO. 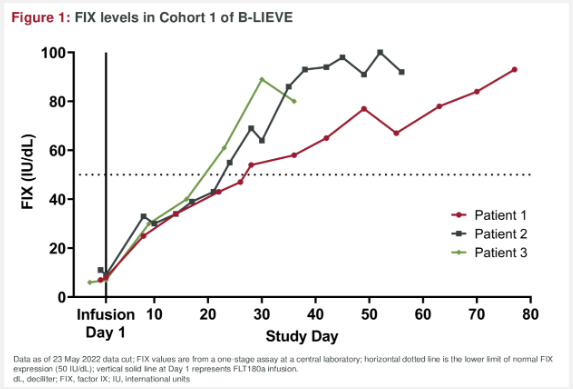