AASLD 2020 – Nash updates from Novo and Inventiva in focus

At the US liver conference Inventiva will make a case for PPAR agonism, while Novo Nordisk and Gilead’s combo will be scrutinised in Nash.

The search for treatments for Nash and hepatitis B has attracted much attention in the past few years, yet progress has been slow. This year’s annual meeting of the US liver disease association, AASLD, promises updates from several contenders that look likely to push into late-stage studies.

Among late-breaking abstracts, released over the weekend, a Nash trial combining projects from Novo Nordisk and Gilead looks set to be of interest; encouraging signals could persuade the companies to continue the collaboration. In hep B, Roche and Glaxosmithkline will be vying for attention, while rare diseases will also be a focus, with Alberio and Arrowhead showcasing recently announced data.

Despite the numerous setbacks to the Nash pipeline the liver disease remains a big focus for researchers and investors, although the lack of late-stage data at AASLD illustrates just how hard it has been to make progress.

The Novo and Gilead study will be of interest largely because it could provide clues as to whether the latter might make any further moves in this space. After the failures last year of selonsertib in phase III and then of the Atlas combination trial, the big US biotech has seemed to cool on Nash.

The AASLD data concern combinations of Novo’s semaglutide and Gilead’s cilofexor and firsocostat; semaglutide, a GLP-1 analogue, has emerged as a leading Nash contender, and the Danish developer intends to commence phase III trials next year, after receiving breakthrough designation from the US FDA.

Although cilofexor and firsocostat – an FXR agonist and an ACC inhibitor respectively – were part of the disappointing Atlas study, the cohort that tested these two agents together showed the biggest impact on fibrosis resolution. Data revealed so far in the AASLD abstract suggest that adding semaglutide could bring additional benefits.

What remains unclear is the two developers’ keenness to push on here. The initial agreement does not seem to have any scope for further work; neither company had replied to emailed questions at the time of going to press. 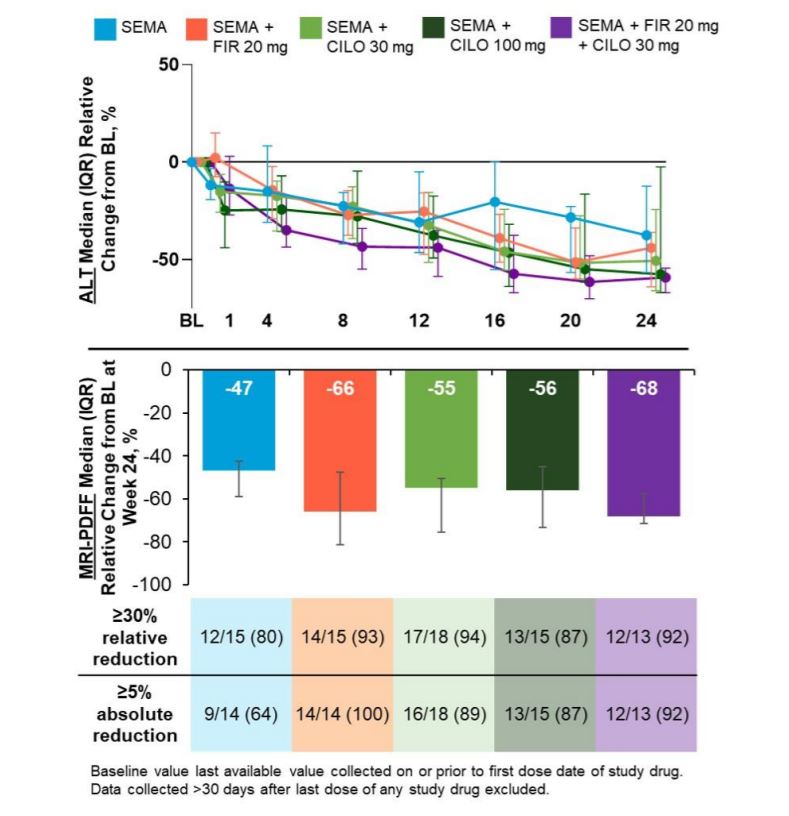 Elsewhere at the conference, Inventiva will be attempting to persuade doubters that PPAR agonists still have a place in treating Nash. The company has two late-breaking posters that detail further cuts of the phase IIb Native trial of lanifibranor, which surprisingly succeeded earlier this year.

At an investor call being held after the conference, company followers are hoping to hear an update on the design of a phase III trial, although the biggest question here is whether Inventiva will be able to persuade a partner to come on board.

Two other PPAR agonists have won late-breaker slots. Saroglitazar, from the Indian generics firm Zydus Cadila, is being tested in both Nash and primary biliary cholangitis, and Cymabay’s seladelpar, which surprisingly hit in PBC back in August having failed in Nash, will undergo further scrutiny.

These agents all target PPAR slightly differently – lanifibranor is a pan-PPAR agonist, seladelpar targets the delta subtype, while saroglitizar hits alpha and gamma. The PPAR class has been tainted by toxicity, so these datasets could help determine whether subtype targeting makes a difference.

Efforts in hepatitis B are also inching forward, and the most notable presentations here involve updates from Roche and Glaxosmithkline with their respective RNAi and antisense projects.

Much of the Roche data were disclosed by its partner Dicerna in an R&D update earlier this year, while Glaxo previously presented GSK3228836 data at EASL. Later cuts of both datasets might emerge, however.

Among the rare disease efforts, Arrowhead will be adding detail to a limited release on four patients a few months back on its ARO-AAT project in the rare genetic disorder alpha-1 antitrypsin deficiency (AATD). At the time questions were raised around whether the reported impressive reduction in intra-hepatic Z-AAT, the mutant protein that causes liver injury, was seen across all patients.

Data released in the abstracts appear to confirm that was the case. Still, with results in very few patients much more safety and efficacy data are required on this project; the pivotal Sequoia trial is ongoing.

Elsewhere, full details on Albireo’s odevixibat will also be of interest, in the rare childhood liver disease progressive familial intrahepatic cholestasis. The topline readout from Pedfic 1 in September helped the company to raise $160m, but greater disclosure of the safety profile and more granular cuts of the data are awaited.

Mirum’s rival project maralixibat is also at AASLD, but with a late-breaking abstract in Alagille syndrome, in which it is already filed; the company’s PFIC pivotal study is due to yield data next year.

Glaxo also has a presentation at the conference on its ileal bile acid transporter linerixibat, which it has so far only progressed in PBC. Those backing Albireo and Mirum will have to hope that the big pharma remains uninterested in other rare diseases.