Amarin’s fish oil formulation Vascepa impressed on hard cardiovascular endpoints, but there is confusion about worsening cholesterol in the placebo group.

Amarin made waves in September when it announced a topline win in the Reduce-It trial of its purified fish oil product Vascepa. Full data, presented yesterday at the American Heart Association meeting in Chicago, added an impressive benefit on harder cardiovascular endpoints.

However, there were concerns that the mineral oil pill used as a placebo led to worsening “bad” cholesterol levels, with some fearing that this had helped drive the advantage in the Vascepa group. Amarin brushed off these worries, with its vice-president of clinical R&D, Rebecca Juliano, saying several times during a conference call yesterday that Reduce-It was an outcomes trial, rather than being powered to detect a difference in biomarkers.

And, purely on outcomes, Reduce-It looks good. AHA Attendees already knew that the trial had hit its primary endpoint, with Vascepa given on top of statins reducing the risk of cardiovascular events by 25% (Amarin lands the catch of a lifetime, September 24, 2018).

Figures reported yesterday showed a five percentage-point benefit in the Vascepa group on this measure: 17% of patients in the treatment arm experienced an event versus 22% in the placebo group.

Still, this measure was a five-point composite including “softer” endpoints such as angina. What mattered more to investors was whether there was a benefit on “harder” components like cardiovascular death, and these data too have emerged positive.

This was well above the 15% target that Jefferies analysts had set in the run-up to the AHA meeting. On this measure, 11% of Vascepa patients and 15% of placebo patients had an event.

And Reduce-It hit on all of its prespecified secondary endpoints, with the exception of all-cause death, which was analysed last in the hierarchy.

The latest data will further fuel the speculation about an Amarin takeout – Jefferies listed Lilly, Sanofi and Novartis among potentially interested big pharma players. But the questions over what was driving the benefit in Reduce-It might also lead to a backlash on the stock markets tomorrow.

Amarin’s stock is up 600% since it reported the topline results in September.

Doubts arose yesterday on the observation that patients in both the Vascepa and placebo groups had increased LDL cholesterol levels after one year, with the effect more pronounced in the placebo arm.

One theory is that the mineral oil used in the placebo pill, to mimic the fish oil used in Vascepa, might have been harming placebo patients.

On a conference call yesterday evening, Ms Juliano refuted this claim, putting up slides showing a similar cardiovascular event rate across placebo patients who had an increase in LDL cholesterol versus those who had the same or decreased levels of LDL-C. 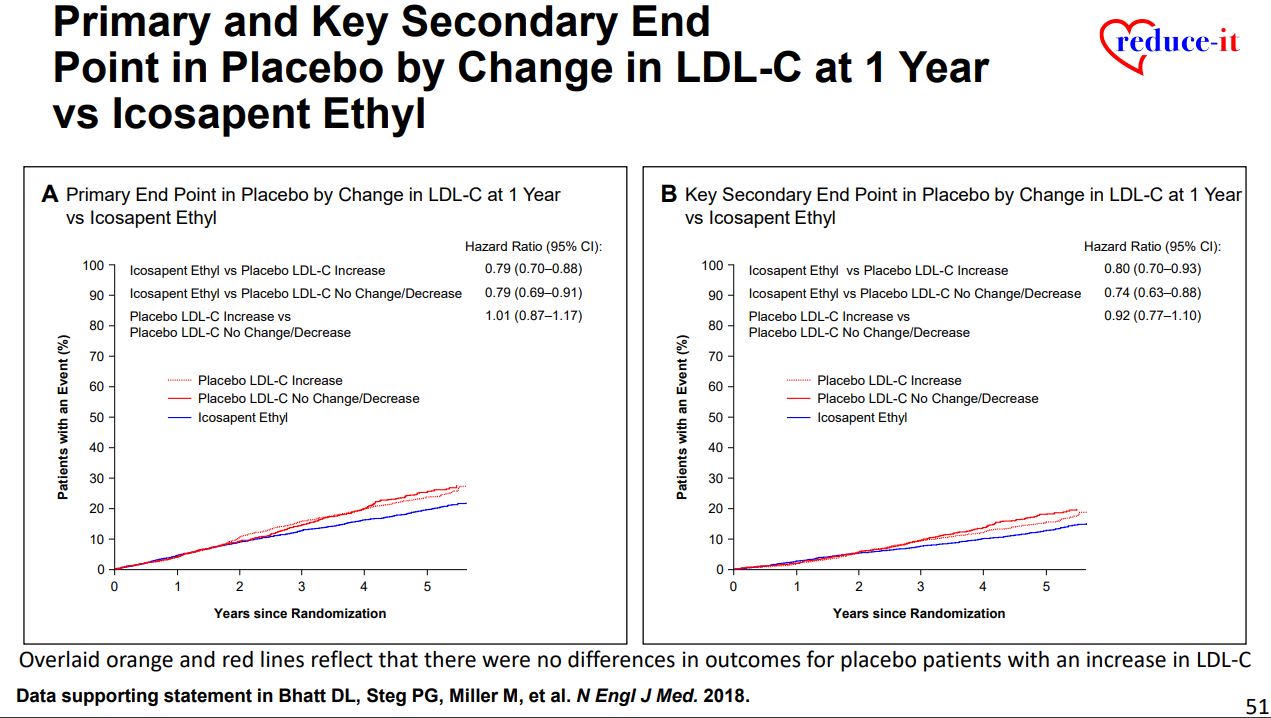 “It didn’t matter in the placebo arm whether the LDL went up or it didn’t, the outcomes were the same,” she concluded. “And importantly, a 5mg/dl difference wouldn’t account for the 25% relative risk reduction observed.”

Another potentially concerning observation for Amarin is that Vascepa – which is designed to lower triglyceride levels – appeared to have a benefit whether triglycerides were reduced or not.

Amarin’s chief medical officer, Craig Granowitz, played this down, saying that high triglyceride levels should be thought of merely as a marker for patients at elevated risk.

In an article simultaneously published in the NEJM, the Reduce-It investigators noted that the exact mechanisms responsible for Vascepa’s benefit were unknown. Amarin has said that Vascepa improved several components of a patient’s cardiovascular profile, not just triglyceride levels.

There was also a statistically significant increase in atrial fibrillation in the Vascepa arm of Reduce-It, but doctors on Amarin’s call said the numbers were low and that this was not too concerning.

Any doubts about the Reduce-It results will not have been helped by the failure of another fish oil study, also presented at AHA yesterday. The 26,000-patient Vital trial, funded by the US National Institutes of Health, found that therapy did not reduce major adverse cardiovascular events.

Amarin will no doubt point to the fact that Vital used a lower dose of fish oil, at 1mg per day versus 4mg of Vascepa in Reduce-It. In addition, the fish oil used in Vital contained both eicosapentaenoic acid (EPA) and docosahexanoic acid (DHA), while Vascepa is a pure form of EPA. According to Amarin, DHA can cause LDL cholesterol levels to rise, something that EPA does not do.

Amarin is eyeing a late 2019 approval for Vascepa in the broad population of mixed dyslipidaemia patients. It now has to convince regulators – and doctors – that the benefits seen in Reduce-It were really down to its drug.