In the Keynote-426 study Merck & Co’s Keytruda looks to have blasted Opdivo out of the water, showing a 47% reduction in risk of death versus Sutent.

Bristol-Myers Squibb is probably getting tired of this, but it’s happened again. Another oncology setting in which Opdivo had seized an early foothold, in this case renal cell carcinoma, looks soon to fall to its arch-rival, Merck & Co’s Keytruda.

The first-line Keynote-426 study, in which Keytruda was combined with Pfizer's Inlyta, was already known to have hit overall and progression-free survival endpoints, but full data had been kept back until today’s abstract reveal at the Asco-Genitourinary Cancers symposium. The result looks likely also to clip the wings of Pfizer/Merck KGaA’s Bavencio, whose Inlyta combo impressed at Esmo last year.

Expectations going into today were that Merck & Co had likely trumped Pfizer/Merck KGaA’s own effort to combine an anti-PD-(L)1 antibody with a tyrosine kinase inhibitor. The latter’s Esmo presentation concerned the Javelin Renal 101 trial, though Bavencio has yet to be filed for renal cancer (Esmo 2018 – Front-line kidney showdown now features four players, October 21, 2018).

The real damage, however, seems to be to the established player, Bristol, for whose struggling Opdivo franchise renal cancer has so far been a rare bright spot. Opdivo plus Yervoy is approved for first-line use in intermediate/poor prognosis patients on the back of the Checkmate-214 trial.

The number for Keytruda to beat was Opdivo/Yervoy's 37% reduction in risk of death in Checkmate-214. The corresponding result in Keynote-426 is thus an emphatic victory for the Merck & Co drug: 47%, irrespective of patients’ prognosis status.

Though Keytruda’s potential in the broad population will not become apparent until subgroup analyses are revealed at Asco-GU on Saturday, today’s press call gave a clue. Describing the Keynote-426 data, Dr Thomas Powles, of Barts Health and the Royal Free NHS Trusts, said: “The benefit was seen irrespective of IMDC risk group or PD-L1 status.”

This is important, since the Checkmate-214 result was strongly driven by PD-L1-positive subjects. The Javelin Renal 101 data were said to be independent of prognosis scores and PD-L1 status, though the breakdown here has also not yet been revealed. 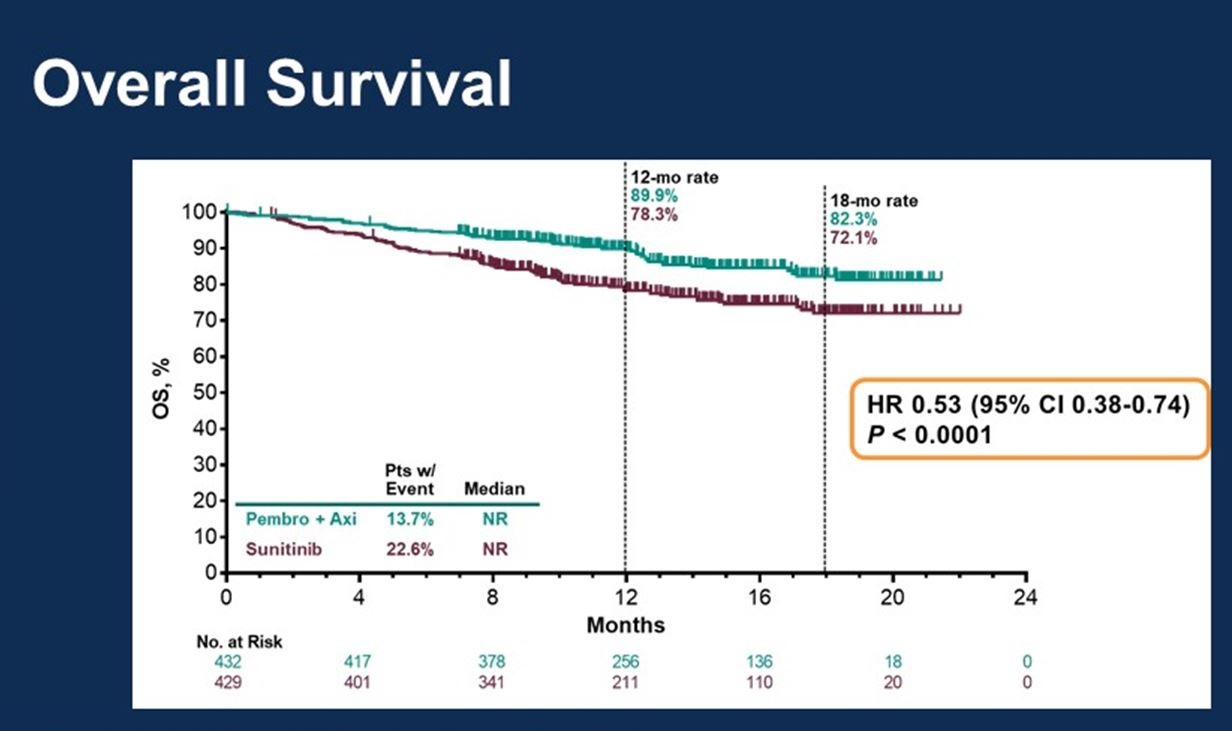 The OS result in Keynote-426 is remarkable because of the likelihood of control arm patients deriving a benefit from second-line Opdivo, which they could get on progression, something that had caused some analysts to say the hazard ratio seen in Checkmate-214 was out of reach for Keytruda. Dr Powles said he would detail patients’ subsequent therapies at Asco-GU.

Another indication of the strength of the Keynote-426 data was the result for the co-primary PFS endpoint: 15.1 months for Keytruda is numerically better than the 13.8 months seen with Bavencio in Javelin Renal 101 (the OS result here is insufficiently mature for analysis).

Dr Powles pointed out that 11.1 months of PFS for Sutent control in Keynote-426 was high, suggesting that the result was particularly robust.

Keynote-426 has thus become the second of four pivotal trials combining checkpoint blockade with tyrosine kinase inhibition to read out.

Attention will now turn to Bristol’s Checkmate-9ER, testing Opdivo plus Cabometyx, and Clear, a Merck & Co/Eisai study in which one cohort combines Keytruda with Lenvima; these will yield data around September 2019 and April 2020 respectively.

If Inlyta is now looking increasingly like the best drug to combine with checkpoint blockade in first-line renal cancer then overall survival data from Javelin Renal 101 remain important. Because Pfizer owns Inlyta as well as Bavencio it retains a commercial advantage, though such a bundled combo, it now seems, might come up short on efficacy even if it does come with a cost benefit.