After years in the wilderness acute myeloid leukaemia is seeing a wave of activity, and there could be more targeted agents to come.

Until recently acute myeloid leukaemia was a neglected cancer with few therapy options. But in the past couple of years several targeted agents have reached the market – and early data from a novel trial, presented at the Ash meeting today, suggest that there could be more to come.

That study, Beat AML, aims to match patients with the most suitable therapy according to their mutation status. It now includes 11 arms and seven agents, up from the four disclosed candidates when the trial was launched at Ash two years ago (Ash – Precision AML trial adds pharma candidates to the mix, December 5, 2016).

And this is not the end for the study, which has been designed to add arms as promising therapies emerge, or remove them as projects fail. A future area of interest is novel combinations, Dr Amy Burd of the Leukemia and Lymphoma Society told a press conference at Ash this morning.

She highlighted the fact that patients with both IDH2 and Ras mutations did not respond well to Celgene’s Idhifa. The drug, approved last year, is already being tested in an arm of Beat AML comprising IDH2-positive patients, and this substudy is one of the first to report data, yielding a 44% overall response rate.

Meanwhile, Ras is a notoriously difficult target to hit. Dr Burd would not give more details on what candidate(s) Beat AML was looking at here, but said this should be announced next year.

She did not rule out looking at E-selectin antagonism, another novel approach highlighted at Ash today courtesy of Glycomimetics’ GMI-1271, known generically as uproleselan. Early data were described as encouraging, with the caveat that they came from an open-label trial. 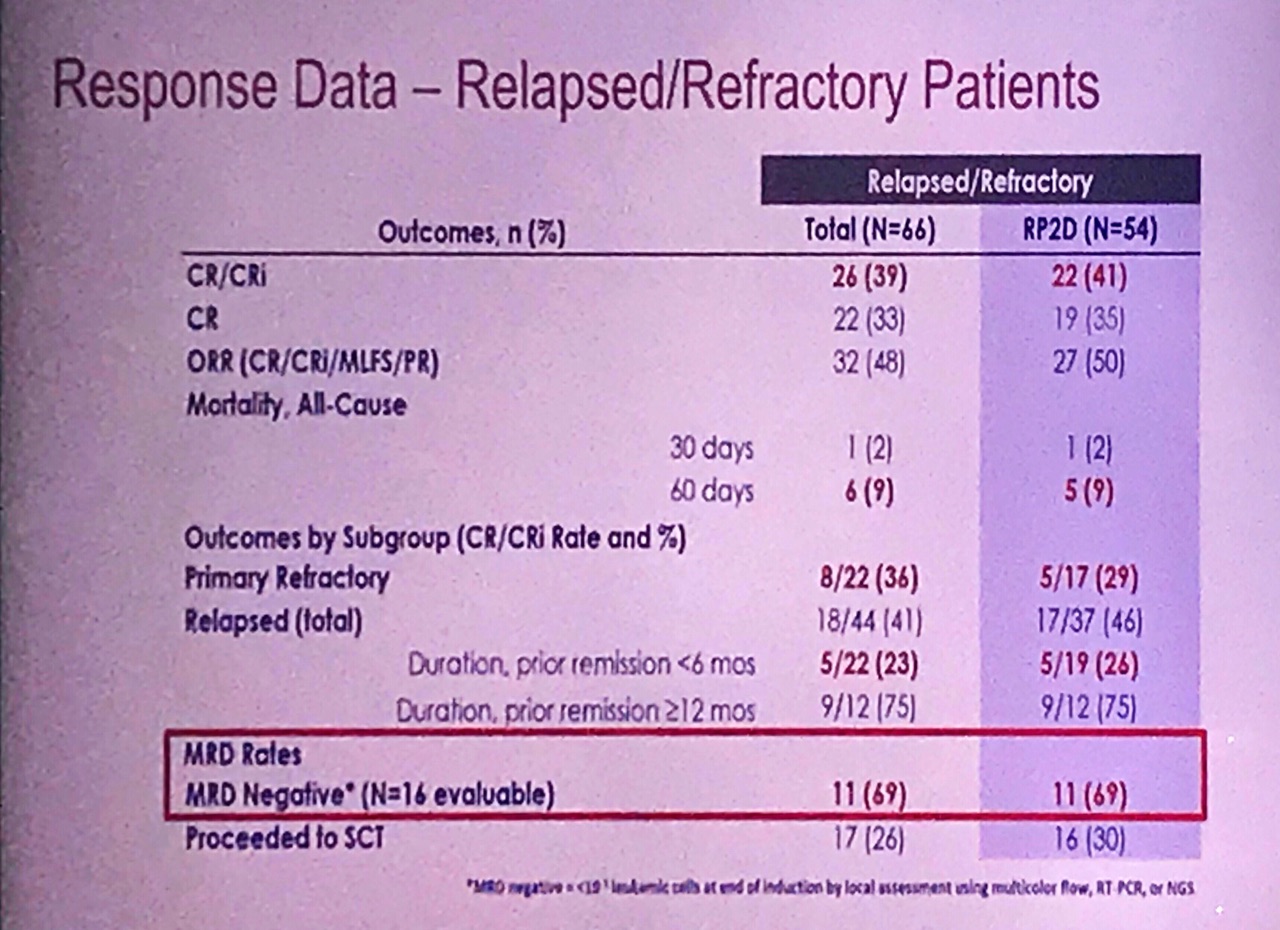 Two phase III trials of uproleselan are ongoing in relapsed/refractory and treatment-naive AML, and should give a better idea of the project’s promise.

Another new mechanism that features heavily at this year’s meeting is FLT3. Representing this class of drugs in Beat AML is Astellas’s FLT3 inhibitor Xospata (gilteritinib), which was recently approved in the US for relapsed or refractory AML patients with the FLT3 mutation.

Other FLT3 inhibitors include Daiichi Sankyo’s quizartinib, which is being reviewed by the FDA following positive data from the Quantum-R trial (EHA – Daiichi data set quizartinib up for regulatory review, 18 June 2018).

These two projects were both featured at Ash, along with early data on Allogene's anti-FLT3 CAR-T asset ALLO-819.

These agents might one day join Xospata and Novartis’s Rydapt, a forerunner of the FLT3 approach that is now thought to act more broadly than originally believed. Other approvals in different AML subtypes in the past couple of years include Jazz’s Vyxeos and Pfizer’s Mylotarg.

Pushing such candidates through development is not, strictly speaking, Beat AML’s remit. The overall trial’s primary endpoint is whether patients can be assigned to the most relevant targeted therapy within seven days, using genetic profiling.

Still, this is a first step to allow targeted therapy for AML – an approach which will, if recent developments are anything to go by, only become more widespread in future.

Roche and Celgene set for battle in acute myelogenous leukaemia

Therapeutic focus - PI3Ks in the spotlight in 2012