Crispr Therapeutics was already one of the big winners of Ash, promising data from seven patients treated with its Vertex-partnered project CTX001 having been revealed in its abstract in November.

New data unveiled at the Ash meeting today, including results from three more patients, were in line with those in the abstract, boosting hopes that there could be substance behind the Crispr hype. The lead investigator, Dr Haydar Frangoul of the Sarah Cannon Research Institute in Nashville, Tennessee, went as far as saying that CTX001 could represent a functional cure for beta-thalassaemia and sickle cell disease.

Presumably a lot more data will be needed before this can become reality. But CTX001 is off to a good start.

In beta-thalassaemia all seven patients treated with CTX001 are transfusion-independent, while in sickle cell disease all three subjects are free of vaso-occlusive crises. In both sets of patients clinically meaningful increases in haemoglobin have been maintained over time.

The data could be bad news for Bluebird, which is already looking over its shoulder after being hit with a US delay for its gene therapy Lentiglobin in sickle cell disease.

Current sellside consensus puts CTX001's 2026 sales at $1.3bn, versus $1.5bn for Lentiglobin, according to EvaluatePharma. Still, forecasts for the latter have been coming down steadily, and might take a further hit after the latest CTX001 data.

CTX001, an autologous, ex vivo Crispr/Cas9 gene-edited therapy, aims to do this by reducing the expression of BCL11A, a transcription factor that normally suppresses the production of foetal haemoglobin.

The primary endpoint of CTX001's sickle cell disease trial, Climb SCD-121, is the proportion of patients with foetal haemoglobin of 20% or more, sustained for at least three months, starting six months after CTX001 infusion. 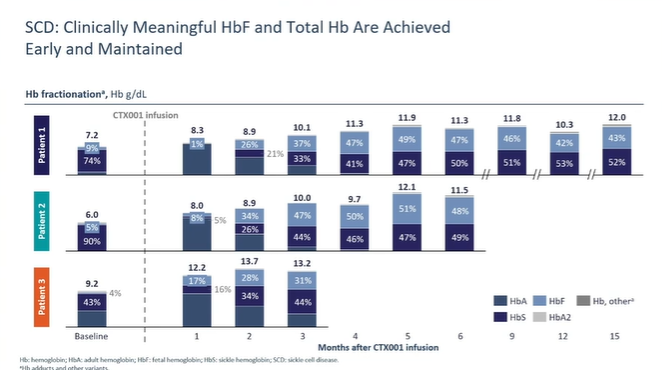 These data look slightly better than the results in two patients that caused Crispr's share price to rise 10% at the time of the Ash abstract drop (Ash 2020 preview – early winners and losers, November 6, 2020).

They are also in line with the latest results with Bluebird’s Lentiglobin, which showed average total haemoglobin levels of 11.5g/dl in 16 patients, although the usual caveats about cross-trial comparisons apply. An updated cut from group C of the HGB-206 study of Lentiglobin in sickle cell disease is due at Ash on Monday.

Lentiglobin is also an ex vivo therapy, but it uses a lentiviral vector to deliver a modified beta-globin gene, which produces an anti-sickling form of adult haemoglobin.

As far as CTX001's safety was concerned, there were some serious adverse events in Climb SCD-121, but these were mostly attributed to either the busulfan preconditioning regimen or plerixafor, the immunostimulant used to mobilise hematopoietic stem cells before extraction.

Dr Frangoul, presenting the data at Ash, said there were no serious adverse events related to CTX001.

Meanwhile, the beta-thalassaemia study, Climb Thal-111, enrolled transfusion-dependent patients, including those with the most severe β0/β0 subtype. The primary endpoint is the proportion of patients with a transfusion reduction of 50% for at least six months, starting three months after CTX001 infusion.

None of the patients required red blood cell transfusions beyond two months after treatment with CTX001, Dr Frangoul noted. All remain free of transfusions with follow-up ranging from 1.8 to 20.5 months.

In the seven patients with at least three months of follow-up, the median haemoglobin level was 11.5g/dl.

Encouragingly, the more severe patients appeared to respond well, including two with a severe beta-globin mutation, IVS-I-110, and one β0/β0 patient. Dr Frangoul said that at a recent four-month update the β0/β0 patient’s total haemoglobin levels had increased to 11.5g/dl; this datapoint is not included in the slide below.

However, CTX001’s safety did not look quite as clean: one patient had four serious adverse events possibly related to the project, although all resolved.

Crispr and Vertex still need to replicate these data in more patients, and with longer follow-up; both Climb SCD-121 and Climb Thal-111 are set to recruit 45 patients apiece. But the early results with CTX001 will have given Bluebird plenty to worry about. 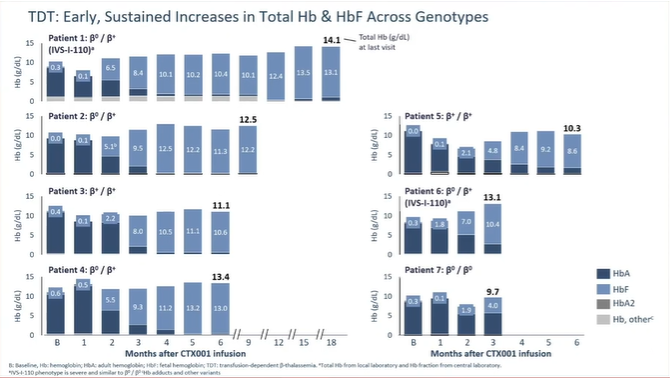