And bleeds seen with the “transformative” project were played down.

We already knew that Uniqure’s haemophilia B gene therapy, etranacogene dezaparvovec, worked well at six months in the pivotal Hope-B trial. However, it is one-year data that regulators want to see – and an early glimpse given at the Ash meeting today suggest the therapy is on the right track.

Further details were also provided on the previously disclosed 21 bleeds: seven of these were spontaneous, although during a press briefing, Dr Steven Pipe of the University of Michigan played down their significance.

“In context, with really good prophylaxis in the lead-in phase of this trial, patients still had 123 cumulative bleeds and 107 treated bleeds,” he said.

Dr Pipe noted that, after therapy, the number of treated bleeds was reduced by 91%, but added: “That’s for the whole cohort, and it does include some patients at the lower levels [of factor IX expression]. In patients towards the median and higher, I think we can expect that bleed control should be very good.”

When asked if etranacogene dezaparvovec represented a cure for haemophilia B, he replied: “I think most people would accept these are functionally cured levels. Patients don’t have to think about their haemophilia anymore. This is pretty transformative for patients.”

Moderating the discussion, Dr Robert Brodsky of Johns Hopkins University School of Medicine agreed that the therapy, previously knowns as AMT-061, could be “practice changing”.

Still, investors will no doubt be keeping an eye on bleeds, particularly as one of Hope-B’s three co-primary endpoints is annualised bleeding rate at one year. The other two co-primaries are factor IX levels at both 26 weeks and 52 weeks after dosing.

Today, Dr Pipe presented some post-26-week data – though in fewer patients, these results suggested that the response to etranacogene dezaparvovec looked durable over the longer term. 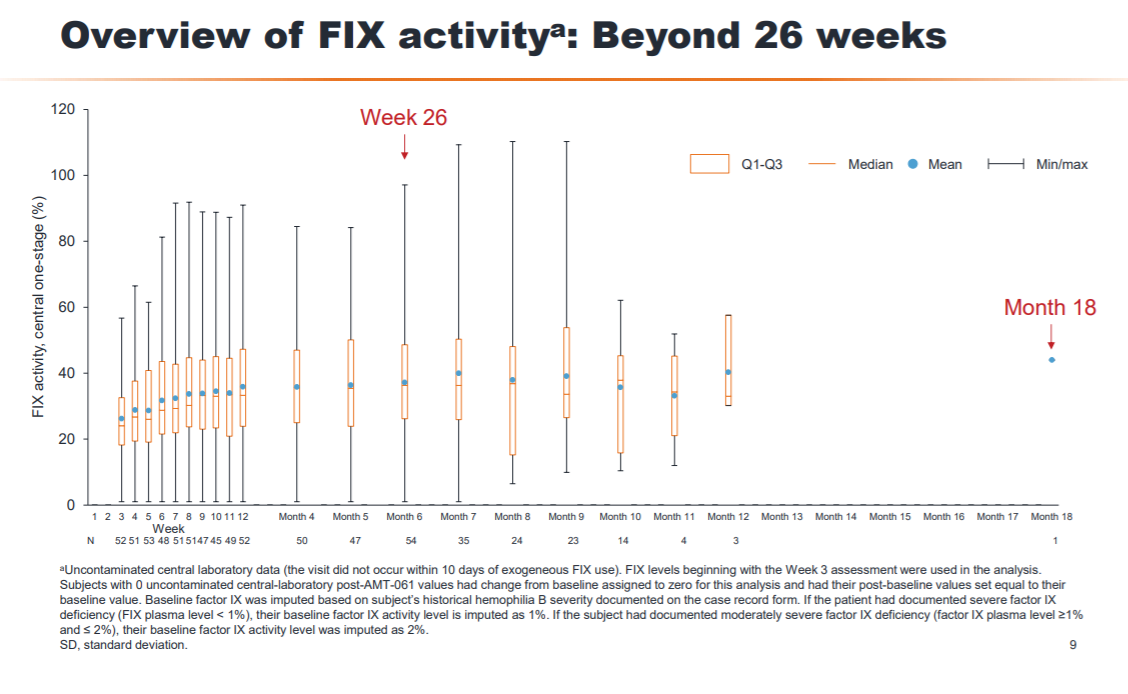 This was echoed by two-year data from the project’s phase IIb trial, which featured at Ash yesterday, which found mean FIX activity of 44% at two years, albeit in just three patients.

There has been speculation that this might be down to something inherent in FIX versus FVIII. When asked for an explanation yesterday, the presenter of the phase IIb etranacogene dezaparvovec data, Annette von Drygalski of the University of California San Diego, replied: “unfortunately we’re all a bit in the dark on that.”

Another potential plus point with Uniqure’s project is its efficacy in most patients with pre-existing neutralising antibodies (NAbs) to AAV – companies developing other haemophilia B gene therapies have excluded these subjects from their trials. Uniqure believes the project's treatment effect here is due to its use of an AAV5 capsid, a spokesperson told Evaluate Vantage.

Dr Pipe said that not having to screen out patients with NAbs would be a “game changer”; 43% of patients in Hope-B had these antibodies. However, there does seem to be a limit to etranacogene dezaparvovec’s use in this population: as previously reported, one patient with very high antibody levels did not respond to therapy.

There was one other non-responder, who received less than 10% of the dose due to an infusion reaction.

Dr Pipe stressed that there was no correlation between NAbs and FIX levels in patients with Nab titres up to 678, and Uniqure says that this would capture more than 95% of the general population. However, Dr Pipe told the press briefing: “I wouldn’t want [678] to be set as a threshold going forward. I think we are going to need some additional data to identify where these cutoffs might be.”

This will be something for Uniqure to worry about later. First the group will need etranacogene dezaparvovec to keep delivering the goods over a year.