Ash 2021 movers – IGM steals the show, for all the wrong reasons

At a meeting lacking practice-changing studies and featuring many disappointments the downturn in IGM’s fortunes stands out.

IGM Biosciences stole the show at the Ash conference for the second year running. Unfortunately for its investors, this year there was no magic rabbit pulled out of the hat like in 2020, and IGM followed an initial dip on its abstract release in November with a 41% crash two days ago as the normally servile sellside largely abandoned the group.

It was not all bad news at Ash, but the meeting seemed more muted this year than in the past, and was characterised by disappointments and a dearth of practice-changing data. Moreover, the period this analysis covers coincided with a year-end downturn in biotech indices, and even the companies that did report positive studies struggled to capitalise.

Thus companies including Fate, Global Blood and Forma, which all reported ostensibly positive data at Ash, finished the meeting firmly in the red. And off even more than IGM was Aptose, whose Hanmi-derived HM43239 raised more mechanistic question than answers, and ALX Oncology, slammed for falling behind in the anti-CD47 race.

X4 Pharmaceuticals beat them all: a phase 1b trial of its CXCR4 antagonist mavorixafor plus Imbruvica in Waldenström’s macroglobulinemia was marred by a patient death deemed possibly related to the combination. And the trial is yet to yield data with the highest dose of mavorixafor. X4 crashed 66%.

This analysis compares share prices at market opening on November 4, when non-late-breaking Ash abstracts went live, against close yesterday, the meeting’s official last day. It is notable that during this time the Nasdaq biotechnology index fell 11%.

IGM’s IgM antibody technology now appears to face an existential crisis. The company’s oncology lead, the anti-CD20 T-cell engager IGM-2323, showed relatively good safety in its lymphoma study, but efficacy was not competitive and limited to a low dose of 100mg.

The fact that there was virtually no activity at doses up to 1g calls into question the project and the technology, and several previously supportive sellsiders downgraded the company. This came after the departure of a key exec, Dan Chen, as chief medical officer, and IGM’s formation of non-oncology business units. 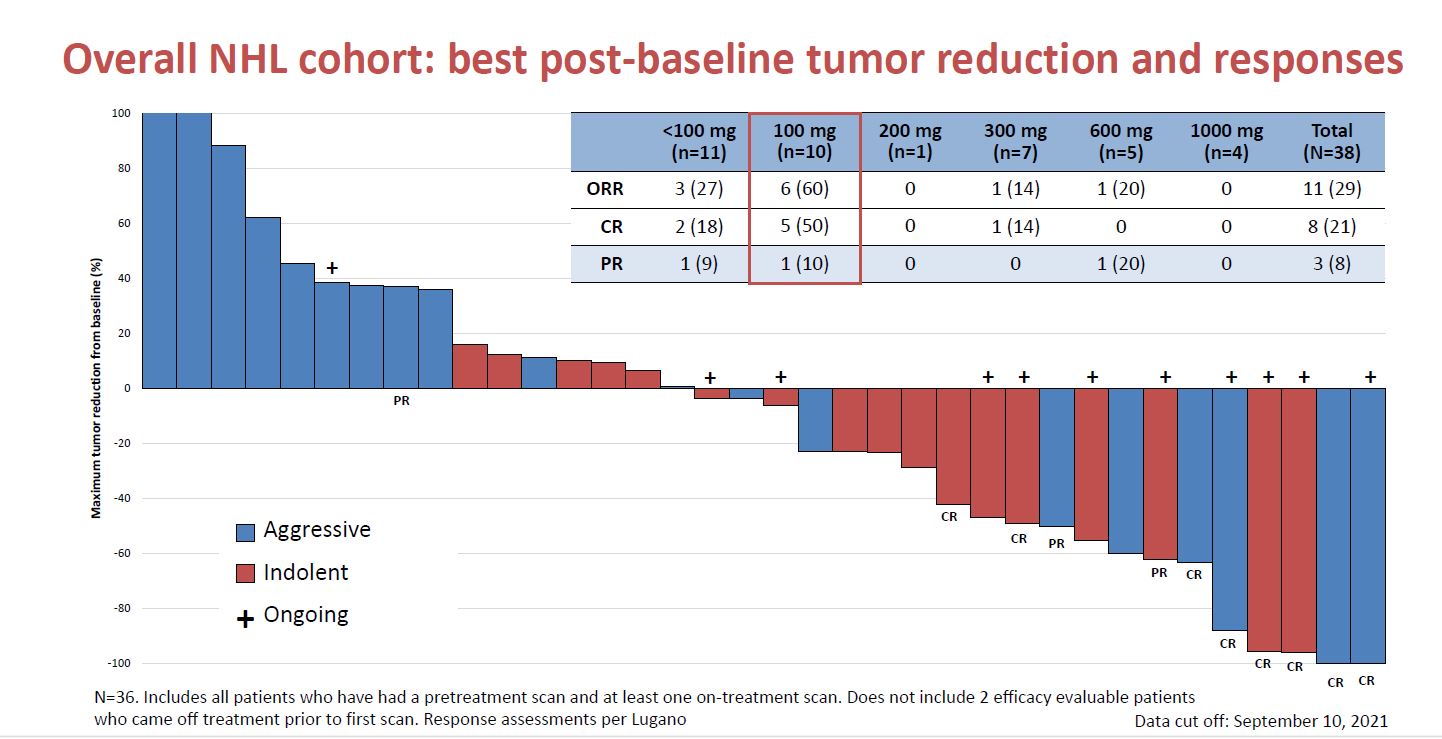 That said, there was good news, and Keros came out on top after its abstract on KER-050 in myelodysplastic syndromes caused a 28% surge in November. Monday's 9% fall took only a little shine off this.

And a few companies were able to use positive Ash data to raise cash. This included Global Blood ($300m convertible) and Legend Biotech ($345m equity); both enjoyed small bumps over the Ash weekend, even if their stocks were down heavily across the entire period in question.

Long-awaited data on Fate’s CD19-directed Car-NK asset FT596 were not bad, the lymphoma cohort now comprising nine monotherapy and 10 Rituxan combo patients, and yielding seven and six remissions respectively. But the focus was always going to be on response durability, which was impossible to gauge given that all but two subjects received multiple FT596 infusions.

Meanwhile, gene therapy companies’ annus horribilis continued, and hopes that some could turn the tide with positive Ash updates evaporated. Sangamo had a mixed meeting, with promising data on its sickle cell project, but its haemophilia A asset disappointed.

Rocket Pharmaceuticals did not convince investors with incremental results from 20 patients treated with three of its gene therapy candidates: RP-L102 in Fanconi anaemia, RP-L201 in leukocyte adhesion deficiency-I, and RP-L301 in pyruvate kinase deficiency.

Still, both companies are doing better than Freeline Therapeutics. That group once looked like it might have a haemophilia B gene therapy contender in verbrinacogene setparvovec (FLT180a), but delays to the project have seen the group trade below cash this year. Long-term results from the B-Amaze trial, presented at Ash, merely raised more doubts about the asset.

Patients treated with the highest dose, 8.32x1011vg/kg, showed waning of factor IX levels after a year. Freeline is testing 7.7x1011vg/kg in its dose-confirmation trial, B-Lieve, with interim results due in mid-2022, and will have to hope that these will answer questions about what the optimal dose might be.

Ultimately biopharma stock price movement reflects the market mood as much as the quality of the data presented, and perhaps the bigger takeaway from Ash is just how few of the studies highlighted appeared to be practice-changing.

The meeting’s big focus, moving Car-T into second-line lymphoma treatment, and the Polarix study of Polivy in front-line lymphoma, have the potential to change practice, but perhaps not until they show convincing overall survival benefits.

That leaves Roche’s mosunetuzumab, an anti-CD20 bispecific that shone last year, as perhaps yielding the most impressive waterfall plot of Ash 2021. Its 80% remission rate in third-line or later follicular lymphoma looked even better considering that over 60% of responding patients, and 76% of complete responders, were still progression-free a year later.

This might make mosunetuzumab a shoo-in for approval – US filing is due by the year end – and likely takes some shine off Genmab/Abbvie’s rival epcoritamab. 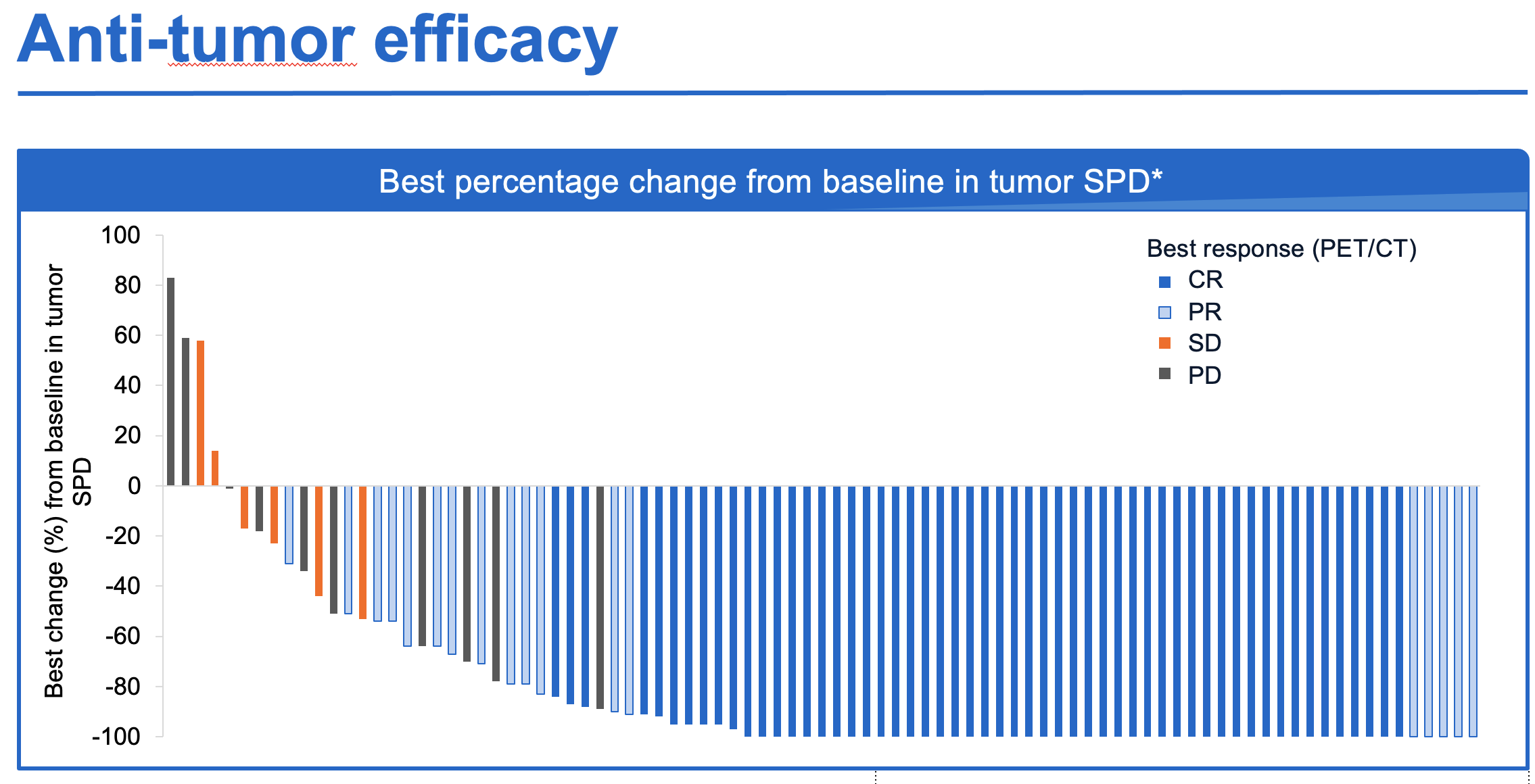