Meanwhile, Roche sees reasons for optimism with its subcutaneous contender.

Astrazeneca is already the dominant force in paroxysmal nocturnal haemoglobinuria, with the intravenous therapies Soliris and Ultomiris. However, competition is mounting, from Apellis’s subcutaneous drug Empaveli and Novartis’s oral hopeful iptacopan.

Astra is not standing still, with a couple of oral contenders of its own. The most advanced, danicopan, will soon be heading to regulators, but did not feature at this year’s Ash; instead it was the next-generation project vemircopan that had data at the conference.

All these drugs hit various parts of the complement cascade to stop the destruction of red blood cells seen in PNH. Both danicopan and vemircopan are oral factor D inhibitors, while iptacopan inhibits factor B.

A spokesperson for Astra told Evaluate Vantage before Ash that the group would submit danicopan to regulators “in the coming months”, but the project looks set to be limited to this niche. At Ash on Saturday, Dr Peter Browett of the University of Auckland noted that when danicopan had been used as monotherapy a suboptimal effect was seen in some patients, something he put down to an unfavourable PK/PD profile.

Step forward vemircopan, which has greater potency and binding affinity than danicopan. Results from treatment-naive PNH patients in a phase 2 study, who received vemircopan monotherapy, were presented at Ash on Saturday.

The primary endpoint of the uncontrolled study was change in haemoglobin levels from baseline to week 12. An interim analysis found a 3.9g/dl increase, to 11.8g/dl, among nine evaluable patients – as already outlined in the Ash abstract. 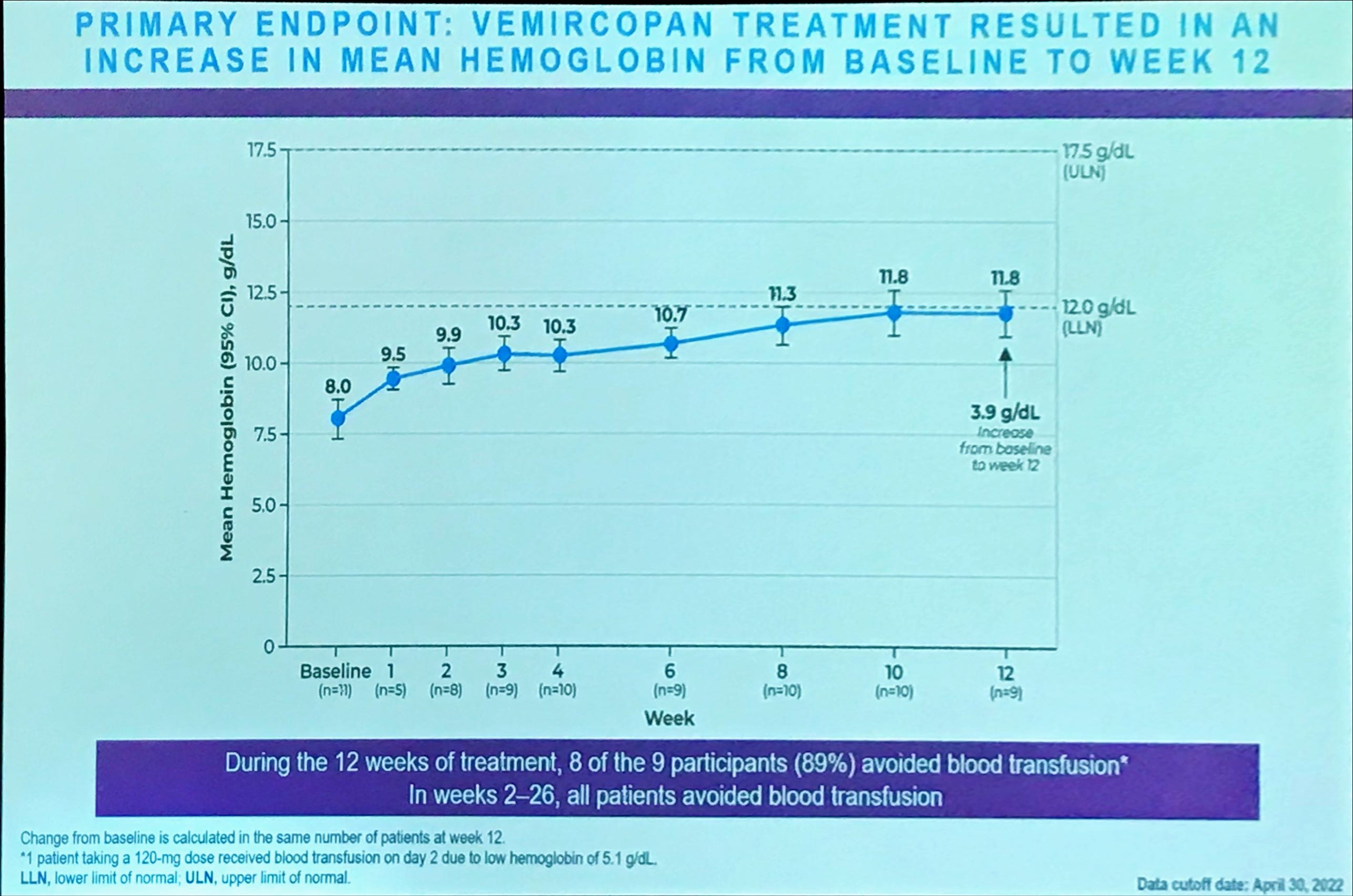 Still, one patient needed a red blood cell transfusion at day two. And there were questions at Ash about why some patients remained anaemic. Dr Browett suggested that this might be a question of dose – the trial allowed escalation from 120mg to 180mg, and at this higher dose “we saw improved control of haemoglobin and haemolysis”.

Astra still has much to do here. And, of the oral players, iptacopan is much further ahead; data from that project’s pivotal trial in treatment-experienced patients, Apply-PNH, will feature as an Ash late breaker on Tuesday. Last Thursday Novartis toplined its treatment-naive study, Appoint-PNH, as positive.

Despite this progress on the oral front, Roche must still see a place for subcutaneous options. An Ash presentation on Saturday featured data from Commodore-3, an uncontrolled Chinese trial of that group’s crovalimab in treatment-naive patients.

After a loading dose, crovalimab – a C5 inhibitor like Soliris and Ultomiris – is administered once monthly. This should give it the edge over Apellis’s Empaveli, a C3 inhibitor given via a twice-weekly, 30-minute subcutaneous infusion.

Commodore-3 had two co-primary endpoints, proportion of patients with haemolysis control and transfusion avoidance, which were achieved by 79% and 51% of patients respectively, again in line with the abstract.

There was one treatment-related adverse event, of grade 3 bacteremia; this patient later died of a subdural haematoma following a fall, but this was deemed unrelated to crovalimab.

Roche has already filed the project in China, but a sterner test awaits with data from the global Commodore-1 and 2 studies, which both pit crovalimab against Soliris in treatment-experienced and naive patients respectively. Commodore-2 completes next year, so Roche’s chances will soon become clearer.

Ash 2022 preview – Novartis has Apellis in its sights