The failure of Roche’s Graduate 1 and 2 studies can be explained away by insufficient amyloid clearance.

While Biogen was moved to reanalyse two failed pivotal studies and cherrypick data from one to back the controversial approval of Aduhelm, its competitor Roche proceeded rather differently. The Swiss group took under three weeks to decide that the Graduate 1 and 2 trials warranted shutting down its gantenerumab programme entirely, CTAD heard last night.

The presentation of full data from Graduate 1 and 2 laid bare the studies’ shortcomings. But their failure to slow Alzheimer’s patients’ cognitive and functional decline can apparently be linked to a mechanistic failing: gantenerumab simply did not clear sufficient plaque from the brain, a fact that will help keep the amyloid hypothesis alive.

In contrast, Emerge, the one arguably positive study backing Aduhelm’s approved dose, did show strong levels of brain amyloid clearance. So did the Clarity-AD trial of Eisai’s lecanemab, whose impressive statistical superiority was detailed earlier at CTAD and appears to back approval of that amyloid-beta MAb, likely next year.

Presenting the Graduate 1 and 2 data last night, Washington University School of Medicine’s Dr Randall Bateman said gantenerumab did clear brain amyloid, but only by about half as much as had been expected.

The reductions amounted to about 20% from baseline at 52 weeks, and 50-60% at 116 weeks. Interestingly the 116-week reductions were statistically significant versus placebo (p<0.0001), but they came well short of the 71% and 76% reductions seen at 78 weeks in Emerge and Clarity-AD respectively.

The percentage of Graduate 1 and 2 patients having cleared plaque (defined as 24 Centiloids or under) was just 25-28% at week 116. In the separate Trailblazer-Alz 4 study presented last night at CTAD 38% of patients treated with Lilly’s donanemab achieved plaque clearance at just six months, versus 2% on Aduhelm.

With such mechanistic shortcomings it is easy to explain gantenerumab’s failure to hit Graduate 1 and 2’s primary endpoint of CDR-SB score versus placebo at week 116. Clear enough amyloid and you have a chance to slow disease, amyloid-beta bulls will argue.

The best that can be said about the efficacy result is that pooled data from the two trials showed a nominal effect favouring gantenerumab, with a 0.26-point reduction in CDR-SB score worsening versus placebo and p=0.044. Obviously, since the primary analysis failed, this was not statistically relevant. 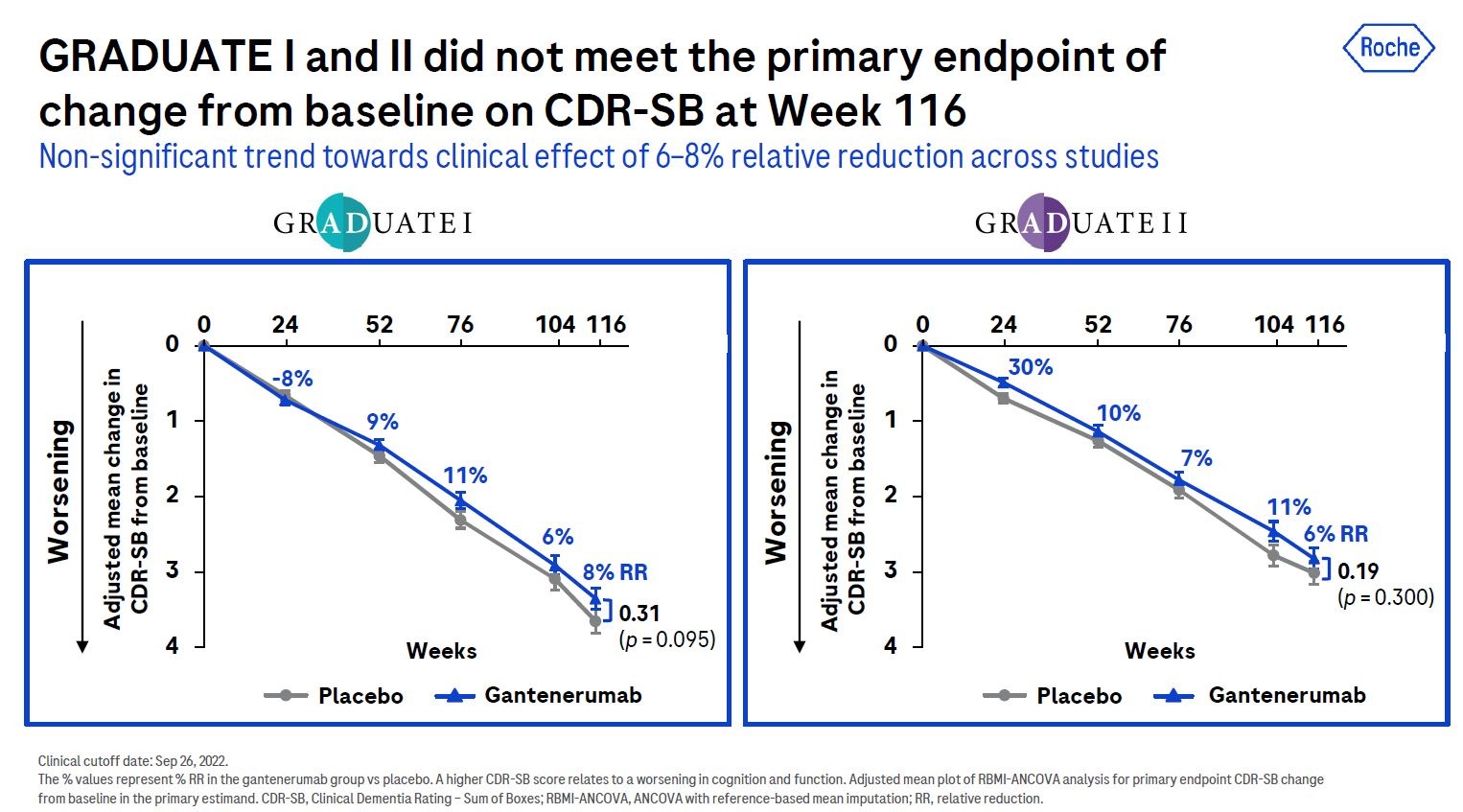 Roche had earlier set the bar high, vowing not to play up biomarkers and gunning for full approval on hard cognitive and functional endpoints. Yesterday it made good on its promise, discontinuing all gantenerumab trials in early symptomatic Alzheimer’s, including Graduation, Open Road and Postgraduate, as well as the Skyline secondary prevention study.

“Discussions are ongoing with Dian-TU [investigators] regarding the next steps for both secondary prevention using gantenerumab in its open-label extension [Dian-001] and the [Dian-002] primary prevention study ... in autosomal dominant Alzheimer’s,” said Dr Bateman.

The speed with which Roche reached this decision is impressive at a time when companies stress the need to fail fast and to do the best for patients. Dr Jeffrey Cummings, of University of Nevada, Las Vegas, who introduced last night’s CTAD session, said the Graduate 1 and 2 results had been available to the company for just under three weeks.

“That’s a very short time for data to be available for beginning an analysis and understanding the topline results,” he told the meeting. “But Roche felt it was very important to share these data.”

CTAD 2022 – donanemab could be the plaque clearer king