EADV 2019 – Pfizer carves out a niche for abrocitinib

One of the company’s Xeljanz follow-ons is slowly emerging from stealth mode in atopic dermatitis.

Jak inhibitors have had to contend with serious toxicities when used for rheumatoid arthritis, and in psoriasis they have struggled to make headway against IL-17 inhibitors. But Pfizer might have found a niche for its follow-on project abrocitinib: atopic dermatitis.

Full results from the pivotal Jade-Mono-1 study look strong, showing all key endpoints met, a neat dose response and, crucially, an absence of the toxicities that have resulted in boxed warnings on the labels of all three Jaks approved for RA. Abrocitinib has a relatively low profile, but a look at its development reveals a vast array of phase I studies, and no fewer than six pivotal trials.

Jade-Mono-1, also known as the B7451012 study, yielded positive topline data in May, but full results were held back for the European Academy of Dermatology and Venereology (EADV) congress, which took place in Madrid over the weekend. Jade-Mono-2, a virtually identical trial, was toplined as positive last month.

The EADV late-breaker detailed efficacy endpoints from Jade-Mono-1, including the two co-primary measures, 12-week IGA and EASI-75 response. Both showed a strong improvement for abrocitinib over placebo, with abrocitinib 200mg being numerically superior to 100mg. 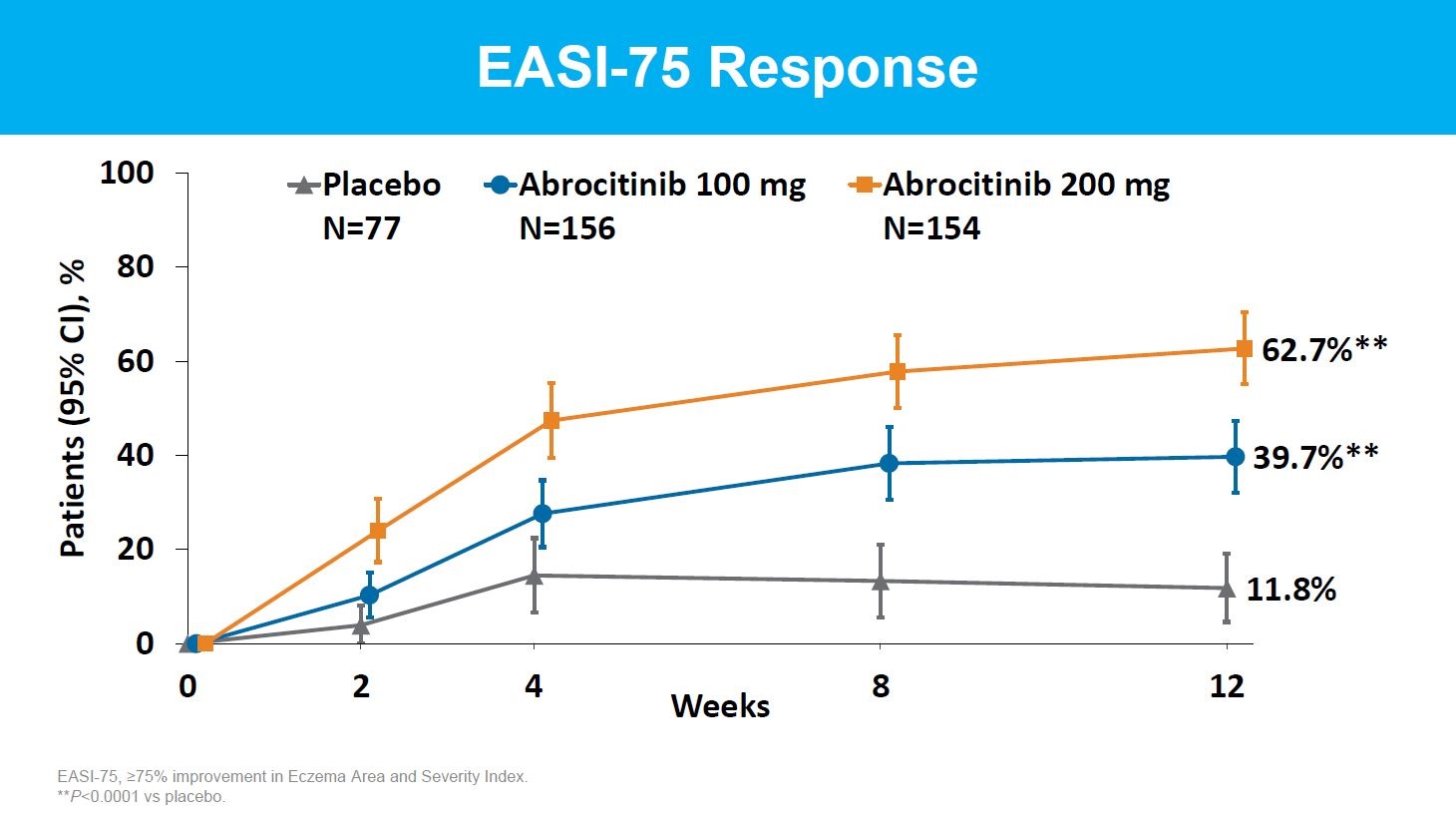 In terms of safety, serious adverse events occurred in 3.2% of abrocitinib-treated subjects, versus 1.9% for placebo, though discontinuations due to these were higher in the placebo group, at 9.1%, versus 5.8% in the active arms. There were no cases of malignancy or venous thromboembolism across Jade-Mono-1, while upper respiratory tract infections occurred in 7.1% of abrocitinib subjects, versus 6.5% of placebo recipients.

Given the precedent of other Jak inhibitors in autoimmune indications these are crucial considerations. Pfizer’s Xeljanz, as well as Lilly’s Olumiant and Abbvie’s recently approved Rinvoq, carry boxed warnings of serious infections, malignancy and thrombosis (Abbvie’s black box could be bad news for Galapagos and Gilead, August 19, 2019).

While Xeljanz and Olumiant hit Jak 1 and 2, Rinvoq is a Jak 1 inhibitor. Abrocitinib too is said to be Jak 1-specific – as is Gilead/Galapagos’s closely watched filgotinib, which is awaiting approval for rheumatoid arthritis.

However, neither Xeljanz nor filgotinib is being studied in atopic dermatitis. It is also not clear why, given the belief that the adverse events are class-related, abrocitinib seems relatively clean, especially considering that it is dosed severalfold higher than the 2-15mg of the approved drugs. Of course, each molecule has its own pharmacokinetic properties.

While atopic dermatitis could give Pfizer some differentiation other Jaks are in hot pursuit. And Leerink analysts point out that Regeneron, which they cover, is a force in atopic dermatitis via its marketed anti-IL-4Rα MAb Dupixent. They claim that Pfizer will “struggle to convert much of the market” given abrocitinib’s 10-20% rate of nausea and headache.

Pfizer, meanwhile, has at least one other Xeljanz follow-on in studies for atopic dermatitis. For now it is playing its cards close to its chest, saying only that additional abrocitinib data “will be shared” next year.

Go or no go? Ardelyx and Chemocentryx among those waiting FDA decisions