EASL 2019 – Having filed to float, all Cirius needs now is the data

The IPO hopeful Cirius Therapeutics presented intriguing Nash data at EASL, but with the final readout from a phase IIb study looming the company’s real value is hard to pin down.

Cirius Therapeutics filed to raise $86m in a Nasdaq flotation in January, and then all went quiet. At EASL Vantage bumped into the company’s chief executive, Bob Baltera, who insisted that an IPO was still very much the company’s intention.

Mr Baltera said the hold-up was largely down to the close proximity of the final data from the company’s phase IIb study of its Nash contender MSDC-0602K. The 402-patient trial is called Emminence, and should yield data in the second half of the year.

“The final data will be the trigger for the next funding round,” Mr Baltera said on the sidelines of the liver conference, taking place is Vienna. “Whether that looks like a crossover round or an IPO we’re not sure yet. But we’ve put the time and effort into filing an S-1 so you can see what our intention is.”

Persuading investors to accept a keen valuation ahead of such a crucial readout would be tough. When Cirius filed for its listing the US government was shut down, Mr Baltera also pointed out, a factor that has been suggested as an explanation for something of a drop-off in IPOs in the first quarter.

MSDC-0602K has been described as a second-generation thiazolidinedione (TZD), something of a notorious drug class, which could also have given investors pause. Avandia and Actos were the first TZDs on the market and the former, sold by Glaxosmithkline, earned the class its reputation: having become a blockbuster diabetes drug thanks to a potent impact on blood sugar, a link with heart failure prompted global withdrawals.

Cirius was in EASL for a presentation of interim data from Emmience, which was given by Stephen Harrison, medical director of Pinnacle Clinical Research and a scientific advisor for the company. Dr Harrison told the conference that growing evidence shows that signalling through PPAR-γ caused the unwanted effects of the TZD class. Positive effects were down to action via mitochondrial pyruvate carrier, which MSDC-0602k has been designed to target without hitting PPAR-γ, he said.

The interim Emminence cut went some way to proving Cirius’s case. While weight gain did occur in MSDC-0602K-treated subjects – something that is frequently seen with agents that sensitise patients to insulin – the company showed that this was not down to oedema, a dangerous form of water retention that can cause heart failure.

Efficacy was impressive: glycaemic control was notable in a subgroup of patients with type 2 diabetes while measures of liver function, including ALT and AST levels, showed strong response rates in the two doses of MSDC-0602K tested – 125mg and 250mg. 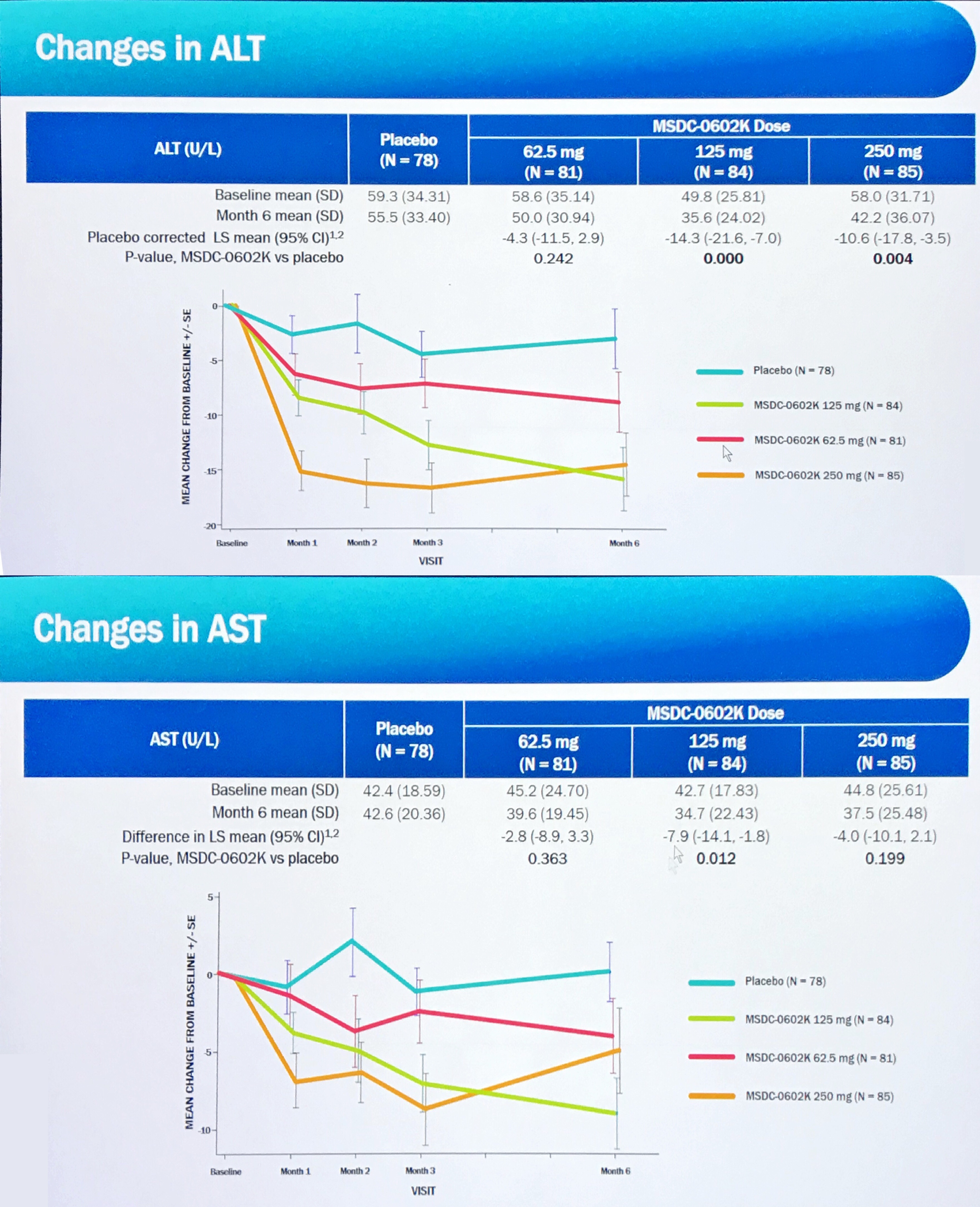 Questions over dose-response were raised, however, with the 125mg dose seemingly bestowing a greater benefit on ALT and AST at six months, as efficacy in the 250mg cohort appeared to wane after month three. Dr Harrison had no explanation for this finding when asked in a question and answer session, pointing only to the impending release of the final dataset.

Mr Baltera said a final decision on which dose would be taken into phase III had yet to be made.

“We’re leaning towards the 125mg, but I reserve my judgement. The next set of clinical data will tell us the best way to develop the drug further,” he said.

Importantly, the final analysis will show whether MSDC-0602K is having any impact on fibrosis; bestowing both metabolic and fibrotic benefits would make a huge difference to the outlook for this project. Analyses presented as EASL hinted at a fibrosis benefit, but until patients’ final biopsies are received, this cannot be confirmed.

Without a full dataset Cirius was probably struggling to achieve the sort of IPO valuation it wanted. In a few months’ time investors will find out whether they were right to hold back.