Yesterday’s high-profile presentation of the Regenerate trial failed to quash concerns about Ocaliva in Nash, despite Intercept’s best attempts to polish the data.

A new safety signal that many had feared might be lurking in Intercept’s full Regenerate data did not, in the end, materialise. What did become clearer, however, was that Intecept’s Nash hope, Ocaliva, has very marginal efficacy, despite the company’s attempt to paint the results in the best light possible.

Most of the new efficacy findings that Intercept unveiled yesterday came from a per-protocol analysis. Intercept’s Gail Cawkwell, head of medical affairs, safety and pharmacovigilance, defended this exploratory analysis, pointing out that it had been prespecified and suggesting that doctors might find it more helpful than the intent-to-treat analysis.

“What we tried to do here was strike a balance between what the regulators will want to see, and what is most relevant for doctors,” she told Vantage.

But physicians that Vantage spoke to were not convinced by this argument. The subgroup in Regenerate received biopsies at the beginning of the trial and at 18 months, and had to have largely stuck to study protocols, something that Dr Ian Rowe, consultant hepatologist at the University of Leeds, UK, said is unlikely to reflect a typical patient’s experience.

“There are lots of reasons why patients might not want a second biopsy, or could not tolerate the drug. You might get a better idea of true efficacy, but you lose a lot of the important context,” he told Vantage.

This is exactly why regulators demand intent-to-treat analyses. Ocaliva might well have US breakthrough designation for Nash, but this does not mean that the FDA will scrutinise the data any less thoroughly. And, while unmet need might provide an argument in favour of approval, Ocaliva’s safety profile is hardly clean.

Dr Rowe also has concerns here, particularly in patients in the presymptomatic stages of fibrosis, in which Regenerate was run and for which Intercept is likely to seek approval.

“Liver events are fairly rare in patients with stage 2 or 3 fibrosis,” he said. He stated that because the benefit of Ocaliva is already quite small, causing side-effects would mean patients “just won’t take the drug. In early fibrosis stages, I don’t see it as a good treatment.”

Dr Rowe also points out that around 20% of early-stage patients spontaneously improve anyway, which also needs to be remembered when Intercept talks about a 30% fibrosis response rate. The real need for fibrosis reversal is in later-stage patients, which is the population being studied in Intercept’s Reverse study – specifically, compensated cirrhosis patients.

Reverse’s results are due next year, and will provide important insight into the real effectiveness of Ocaliva, Dr Rowe contends. 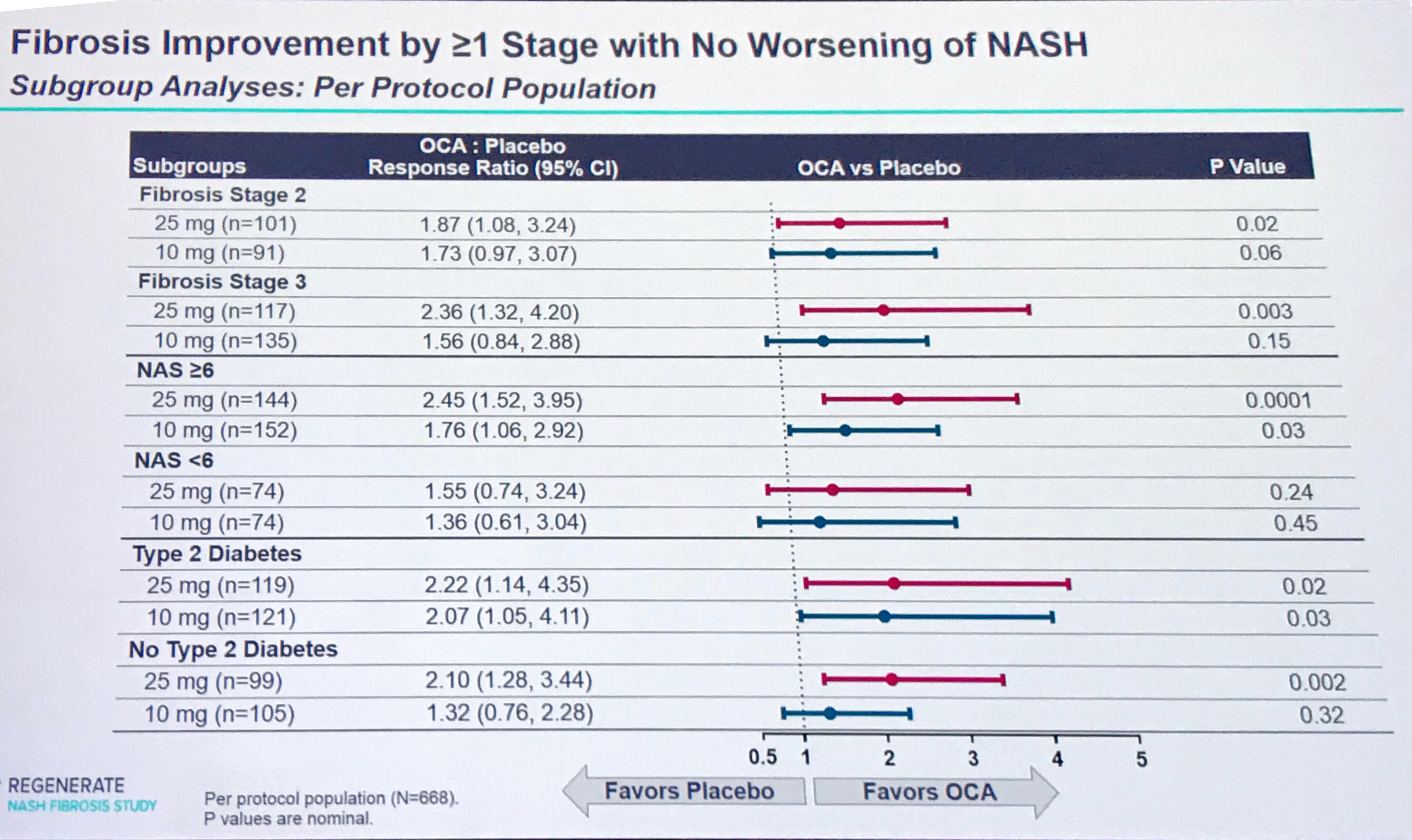 The per-protocol subgroup; how do these data look on an ITT basis?
Source: EASL presentation.

The fact that Intercept has yet to publish granular efficacy cuts in the intent-to-treat population, which are bound to look weaker than the per-protocol data, suggests that it is well aware of these issues (EASL 2019 – Intercept builds a case for Ocaliva, April 11, 2019).

"Many people were disappointed to see [Intercept's] per-protocol data over intention-to-treat, and this is natural," another liver specialist, Dr Elliot Tapper from University of Michigam, told Vantage. "We are all left itching to see the full publication to solidify our reactions to this study by considering the ITT data."

The first paper publication, which should contain these analyses, should should happen this year, said Ms Cawkwell. She also confirmed that the higher 25mg dose would be taken to regulators, and stressed that in-depth safety analyses found well-balanced events across the three arms of Regenerate.

No trends have been detected to suggest that Ocaliva causes any of the serious events, she said, adding that on efficacy, in general, the ITT and the per-protocol data cut “looks very similar”. The company also seems to be preparing for a requirement of biopsy-confirmed Nash or fibrosis for patients to qualify for Ocaliva.

“We know in clinical practice most people don’t do biopsy... and this is this is the first large, prospective, randomised database so these results should help guide whether we can find Nash patients without a biopsy,” Ms Cawkwell said.

For a drug that has a large conference presentation behind it, many important questions remain to be answered about Ocaliva. Supportive sellside analysts remain confident that regulatory approvals will follow, though Intercept fell 13% yesterday.

Speculation that the company was dressing up the data ahead of a fundraising did not help, and it increasingly appears that Intercept will have to launch Ocaliva alone – another red flag for investors.

“Who wants to hold now, for what lies ahead?” one fund manager told Vantage.

This is an updated version of an earlier story.

ACC preview: a veri important test for Merck and Bayer