The plan to file Lentiglobin for sickle cell disease next year gets the green light, as a patient death is deemed unrelated to treatment.

Sickle cell disease is a key second pillar of Bluebird’s Lentiglobin gene therapy, but until now the US registration plan had been rather vague. Today the company set its sights on an accelerated 2021 filing, backed by a crucial update to its HGB-206 trial unveiled at the virtual European Hematology Association congress this morning.

On the efficacy side the data show Lentiglobin’s curative potential in a larger patient cohort, albeit at a still immature time point, with all necessary subjects now enrolled. However, the death of one patient – though deemed unrelated to Lentiglobin – might remind some that gene therapy carries risks.

With Stifel analysts, for instance, hailing the update as strongly supportive of accelerated approval investors were able to shrug off the patient death. Bluebird, which along with the rest of the market had come off yesterday, opened up 4% this morning.

The company today said Lentiglobin would be filed for sickle cell disease in the second half of 2021, based on group C of the HGB-206 trial. The phase III HGB-210 study could then serve to confirm the approval, it told an analyst call.

There is another important change. HGB-206 formally tests Lentiglobin’s ability to result in at least 30% of patients’ haemoglobin being the anti-sickling HbAT87Q form encoded by the gene therapy, but the “new primary endpoint” for approval is reduction of vaso-occlusive crisis (VOC) and acute chest syndrome (ACS). 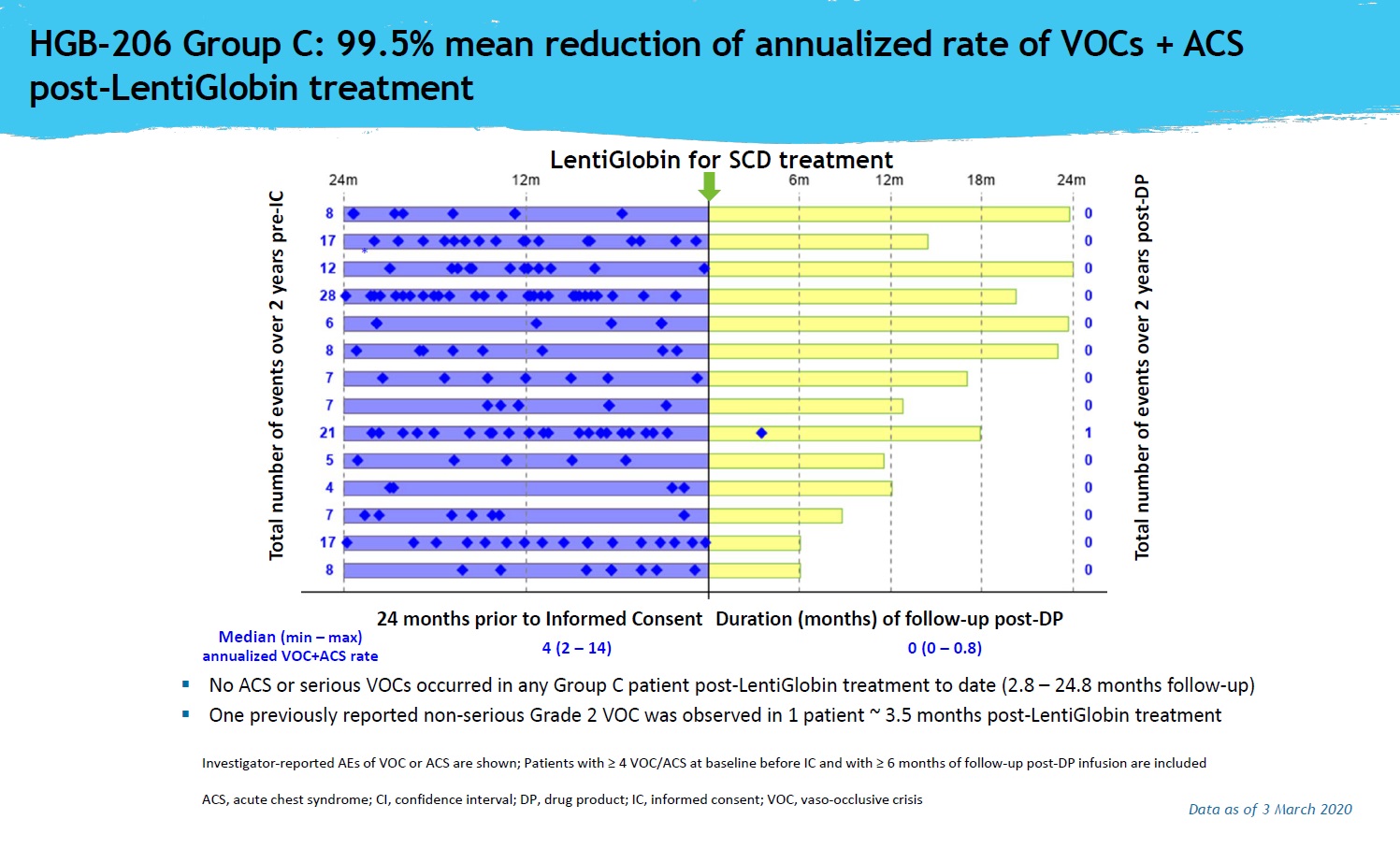 The previous endpoint is showing impressive efficacy, too. In patients with at least 6 months’ follow-up HbAT87Q comprises a median 44% of haemoglobin, while in the five on whom a minimum of 24-month data are available the median is 52%, Bluebird said.

HGB-206’s group C comprises a tweaked manufacturing process, and was earlier shown to give greater efficacy than seen in groups A and B (Ash 2018 – Bluebird faces Lentiglobin reckoning, December 3, 2018).

On the safety side, Bluebird had already reported one case of myelodysplasia in an earlier cohort, but this was blamed on the busulfan preconditioning regimen used. Today it revealed a patient death from cardiac arrest after sudden shortness of breath around 20 months after getting Lentiglobin.

This was deemed “unlikely related” to Lentiglobin, the subject having had a history of cardiac disease, pulmonary hypertension and venous thrombosis. Be that as it may, cautious investors will note that whether a death is deemed related or not is a subjective decision of the study investigator.

Perhaps more importantly, the FDA had been “absolutely aware” of the death at the time the accelerated path was being discussed, said Bluebird’s chief medical officer, Dave Davidson.

In terms of durability of effect, the agency apparently wants to see at least 18 months’ follow-up in group C. The cohort is fully enrolled at 25, but follow-up ranges from 2.8 to 24.8 months, with a median of 12.1. As such there is still some time to go, explaining why filing is not expected before late 2021.

According to EvaluatePharma consensus the sellside expects Lentiglobin to be selling $1.3bn in 2026, $629m of this coming from sickle cell and the remainder from its already approved use, as Zynteglo, in beta-thalassaemia.

The EHA data should give more comfort that such forecast are attainable, though efficacy still needs to be maintained for longer, in more patients, without any nasty adverse event surprises.

Then there is the mounting competitive threat. With Crispr/Vertex, for instance, providing early evidence of promise for their project, CTX001, at EHA, the battle is on.