Novartis makes progress with its most valuable pipeline asset, but others also hope to make a mark in IgA nephropathy.

It might come as a surprise that the oral complement inhibitor iptacopan is Novartis’s most valuable pipeline asset, according to the sellside. Yesterday the Swiss group filled in the blanks about the project’s mid-stage win in the rare kidney disease IgA nephropathy, where a high dose led to a 23% reduction in proteinuria.

Proteinuria is a surrogate endpoint, but one that many other groups are using. There are no approved therapies for IgAN, and the most advanced project here is Calliditas’s Nefecon, which is due an approval decision by September; another big milestone is coming in August, when pivotal data are expected with Travere Therapeutics’ lead project, sparsentan.

Various other assets are also in development, and Novartis is helping to set the bar for its rivals. Leerink had previously said a 20-30% reduction in proteinuria, measured via urine protein to creatinine ratio in a 24-hour urine collection, would be needed for a therapy to be competitive in IgAN – a stance it reiterated yesterday in light of the iptacopan phase II data.

Still, only the 200mg dose of iptacopan hit this goal; this is the regimen that Novartis has already taken forward into its phase 3 IgAN trial, Applause. 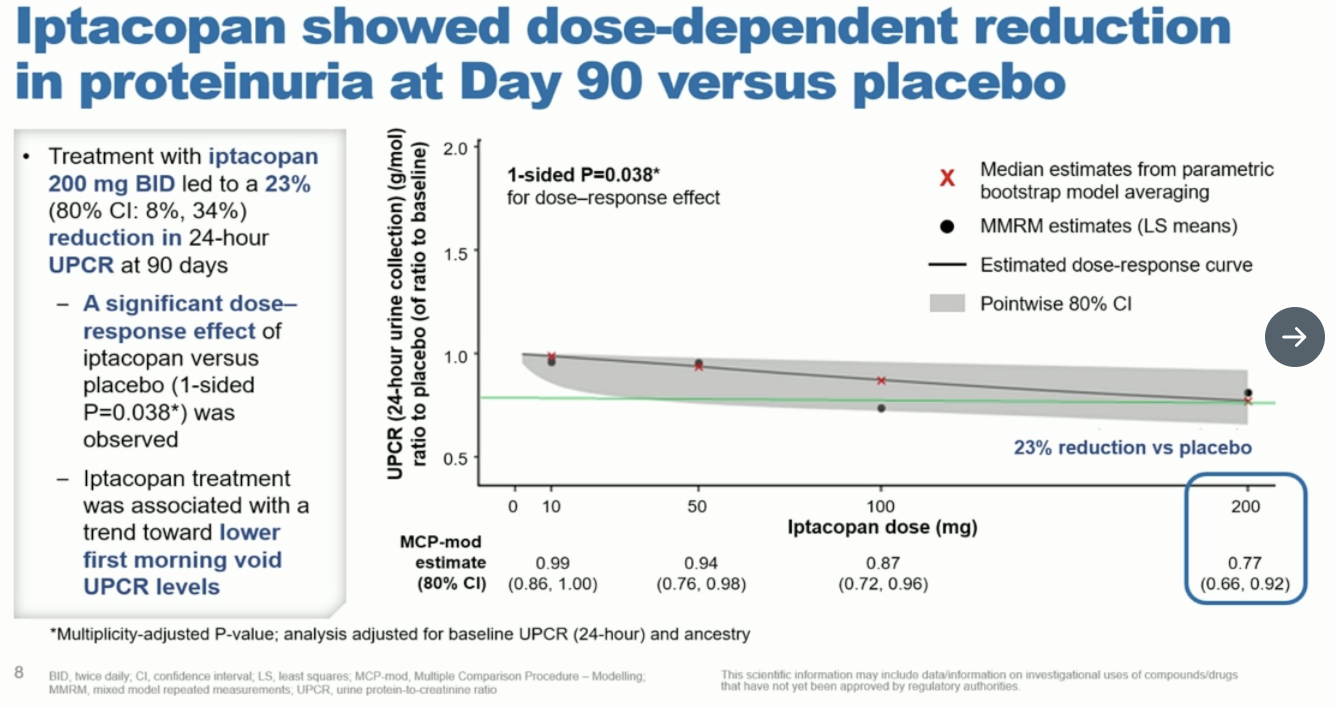 There was also a “trend towards stabilisation” of estimated glomerular filtration rate (eGFR), a harder endpoint, with all doses of iptacopan, versus a decline with placebo, attendees at the ERA-EDTA congress heard.

Iptacopan is an oral inhibitor of factor B, a component of the complement system. Other oral inhibitors of the alternative complement pathway, hitting factor D, are also in development; however, none appears to be in trials for IgAN.

Meanwhile, the most advanced IgAN project, Calliditas’s Nefecon, is a formulation of the steroid budesonide designed to target the small intestine, where the Swedish company says the disease originates. That project showed a placebo-adjusted 27% reduction in proteinuria in phase 3; there was also a statistically significant improvement in eGFR versus placebo.

Novartis will need to see more of the same in its pivotal study. The group has also already taken iptacopan into phase 3 in paroxysmal nocturnal haemoglobinuria, while a pivotal trial in C3 glomerulopathy, where the group also presented data today at ERA-EDTA, is due to start this year.

Iptacopan has a net present value of $4.1bn, according to Evaluate Omnium – ahead of Novartis's radiopharmaceutical 177Lu-PSMA-617, at $3.9bn.

Calliditas signs up Stada in Europe