Novartis’s alpelisib is hailed as the first precision therapy in breast cancer, though as with other PI3K inhibitors toxicity continues to be a worry.

A year ago positive data from the Lorelei trial of Roche’s PI3K inhibitor taselisib ultimately failed to amount to anything, and the project was discontinued. Today at Esmo Novartis revealed full results from the Solar-1 trial of its rival alpelisib that doctors hailed as practice-changing.

The reason for this optimism was that, while Solar-1 recruited all-comers, an effect was only seen in subjects with the PIK3CA mutation that is the target of PI3K inhibitors. Anticipating such an effect, doctors decided to use progression-free survival specifically in PIK3CA-mutant patients as the primary endpoint of Solar-1.

This showed alpelisib to provide a 5.3-month advantage over control, with a resulting 35% reduction in risk of progression hit with a highly statistically significant p value of 0.00065. “There was no effect in patients without the PIK3CA mutation,” Dr André told this morning’s press conference.

Only 232 of the 572 patients enrolled into Solar-1 had the mutation, so the decision about the statistical analysis raises questions about the ethics of treating so many non-mutant patients with a therapy that was already assumed to be ineffective. 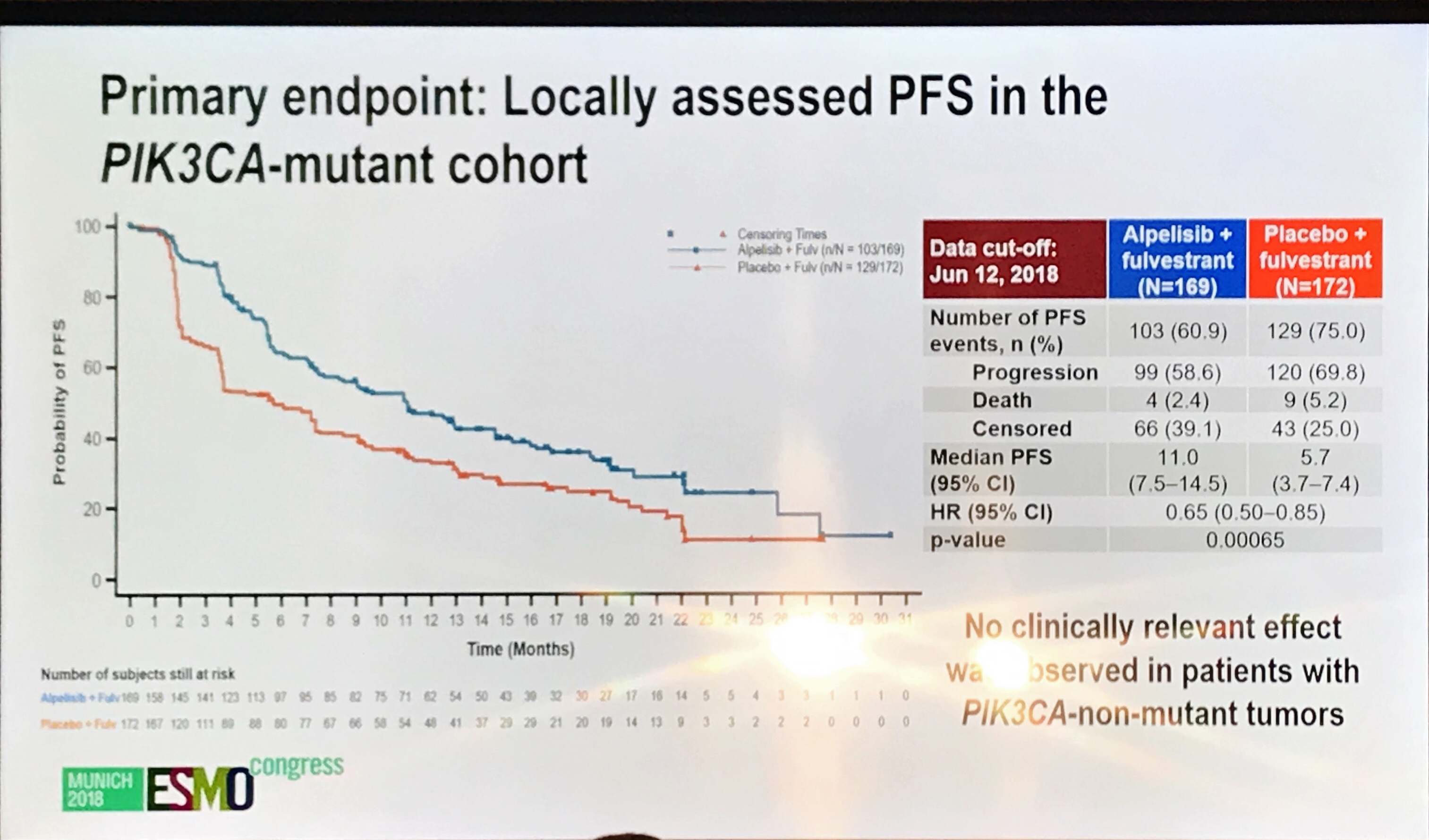 Nevertheless, the discussant, Dr Nadia Harbeck of the University of Munich, called the study practice-changing, and said it would lead doctors into the area of “precision medicine” in Her2 negative disease. When Novartis in August revealed that Solar-1 was positive it said the data were strong enough to begin regulatory discussions.

Interestingly, when Roche was presenting the rival phase II Lorelei data at Esmo 2017, Dr Harbeck said that trial was “hypothesis-generating, though not yet practice-changing”. In the event, the group’s Sandpiper trial showed taselisib to have an unacceptable level of toxicity.

Why should doctors today be so much more optimistic about Novartis’s alpelisib? Dr André said it all came down to this project having very specific selectivity for PI3K alpha, sparing all other isoforms of this kinase.

Taselisib, he argued, was basically a beta-sparing PI3K inhibitor, which was selective for alpha but also had some activity on non-alpha isoforms (Seeking alpha in PI3K inhibition, August 30, 2018). 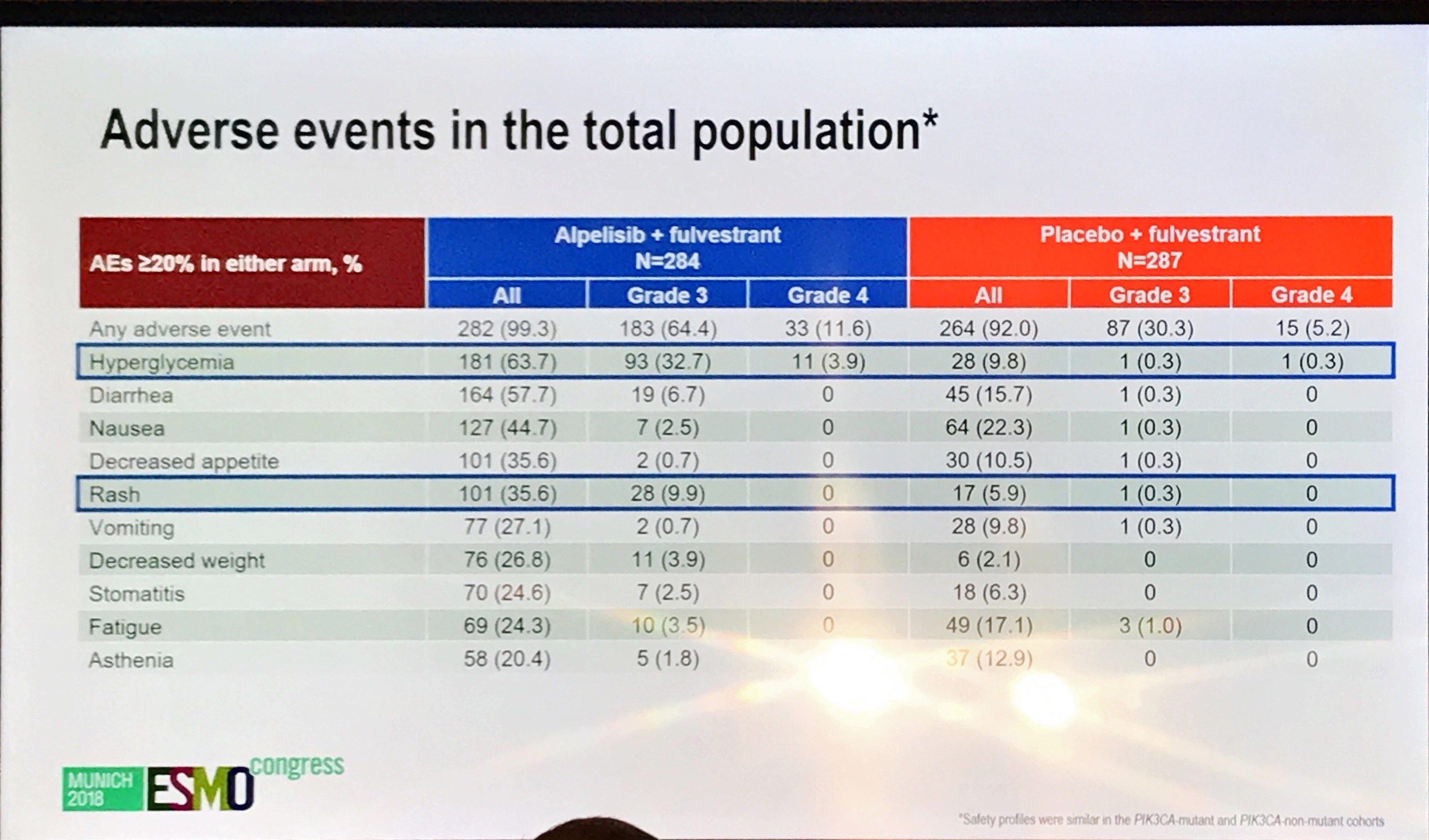 Looking forward to the Esmo presentation, and presumably mindful of Roche’s unfortunate precedent, Credit Suisse analysts had written that safety and tolerability in Solar-1 would be key.

It is safety that now provides Novartis with its most dangerous potential stumbling block. Hyperglycaemia at grades 3 or 4 was seen in 36% of alpelisib patients in Solar-1, versus 0.6% of control subjects.

Dr André put this toxicity down to the PI3K pathway promoting glucose metabolism in cancer cells, and went as far as calling hyperglycaemia a “pharmacodynamics marker” for a PI3K-alpha inhibitor like alpelisib. Investors will recall that this adverse effect tripped up Clovis’s anti-EGFR agent rociletinib.

This issue will now be for regulators assessing alpelisib to decide. Novartis’s other recent breast cancer entrant, the CDK4/6 inhibitor Kisqali, has had a disappointing launch, and with alpelisib providing Kisqali progressors a new option Novartis really cannot afford to trip up here.