The keenly awaited unveiling of full data from Pfizer/Merck KGaA’s Javelin Renal 101 trial has not disappointed.

The squeeze that Exelixis felt when Pfizer and Merck KGaA’s Javelin Renal 101 study read out positively for progression-free survival has tightened with today’s full data readout at Esmo. Not only is the PFS benefit seen in PD-L1-negative patients, it is also evident irrespective of patients’ prognosis.

The study's Bavencio plus Inlyta combo could now compete directly with Exelixis’s Cabometyx in first-line renal cancer. The good news for Exelixis is that its arch-rival Bristol-Myers Squibb should now also be hit in this setting. And last week’s positive readout for Merck & Co’s Keynote-426 study throws a further spanner in the works for all contenders.

Memorial-Sloan Kettering’s Dr Robert Motzer, presenting the Javelin Renal 101 data as an Esmo late-breaker today, said the trial’s primary endpoint, PFS in PD-L1-positive subjects, favoured Bavencio plus Inlyta by 6.6 months versus Sutent, with a 39% reduction in risk of progression hitting a p value of below 0.0001. Sutent is the front-line standard of care.

PFS in all-comers – until a recent redesign this was Javelin Renal 101’s primary endpoint – showed nearly as impressive a reduction in risk, of 31% (p=0.0001) favouring the combo. The co-primary endpoint of overall survival was not presented, and is known to be insufficiently mature for analysis at this point (Pincer movement squeezes Exelixis in kidney cancer, September 12, 2018). 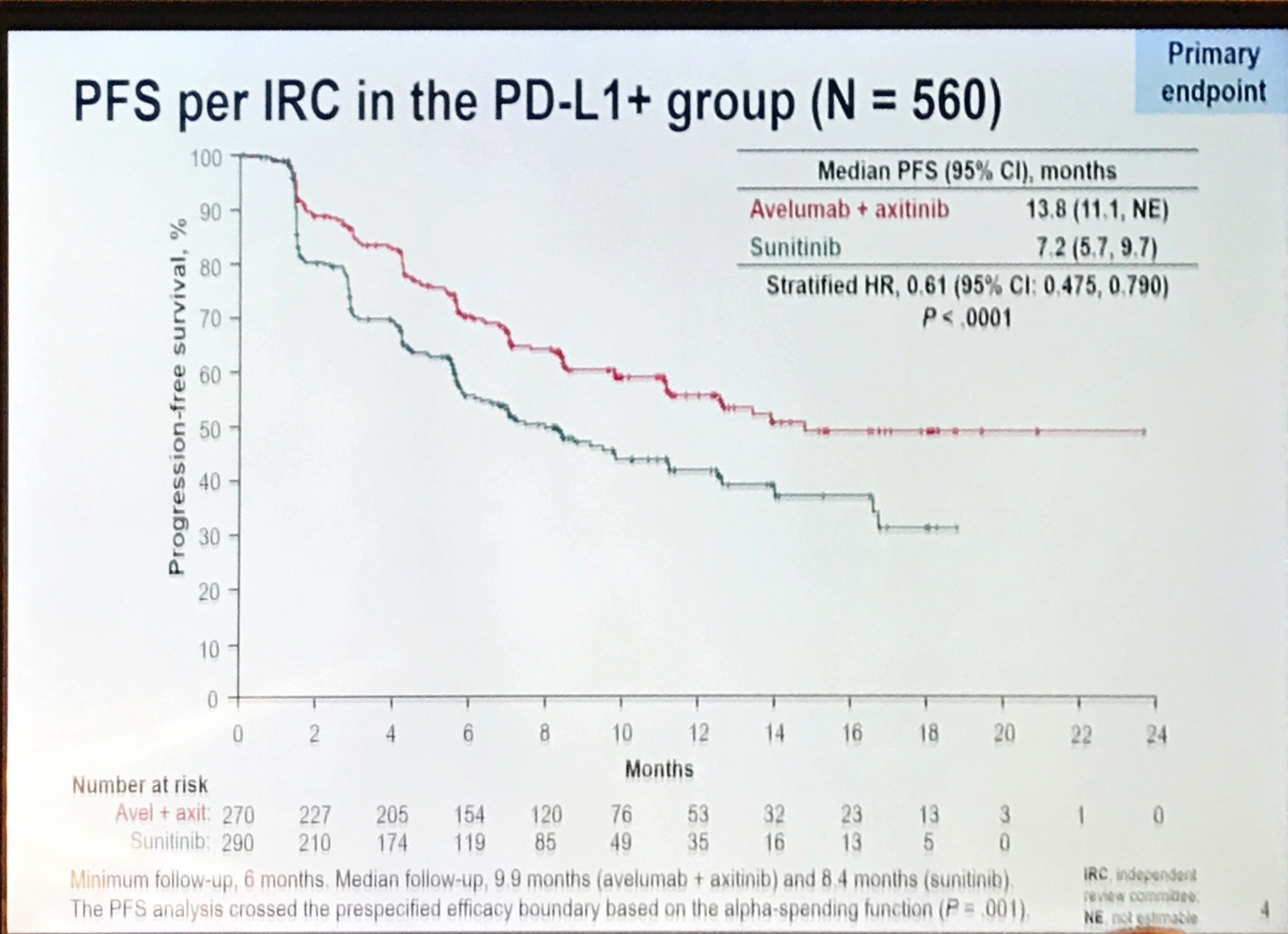 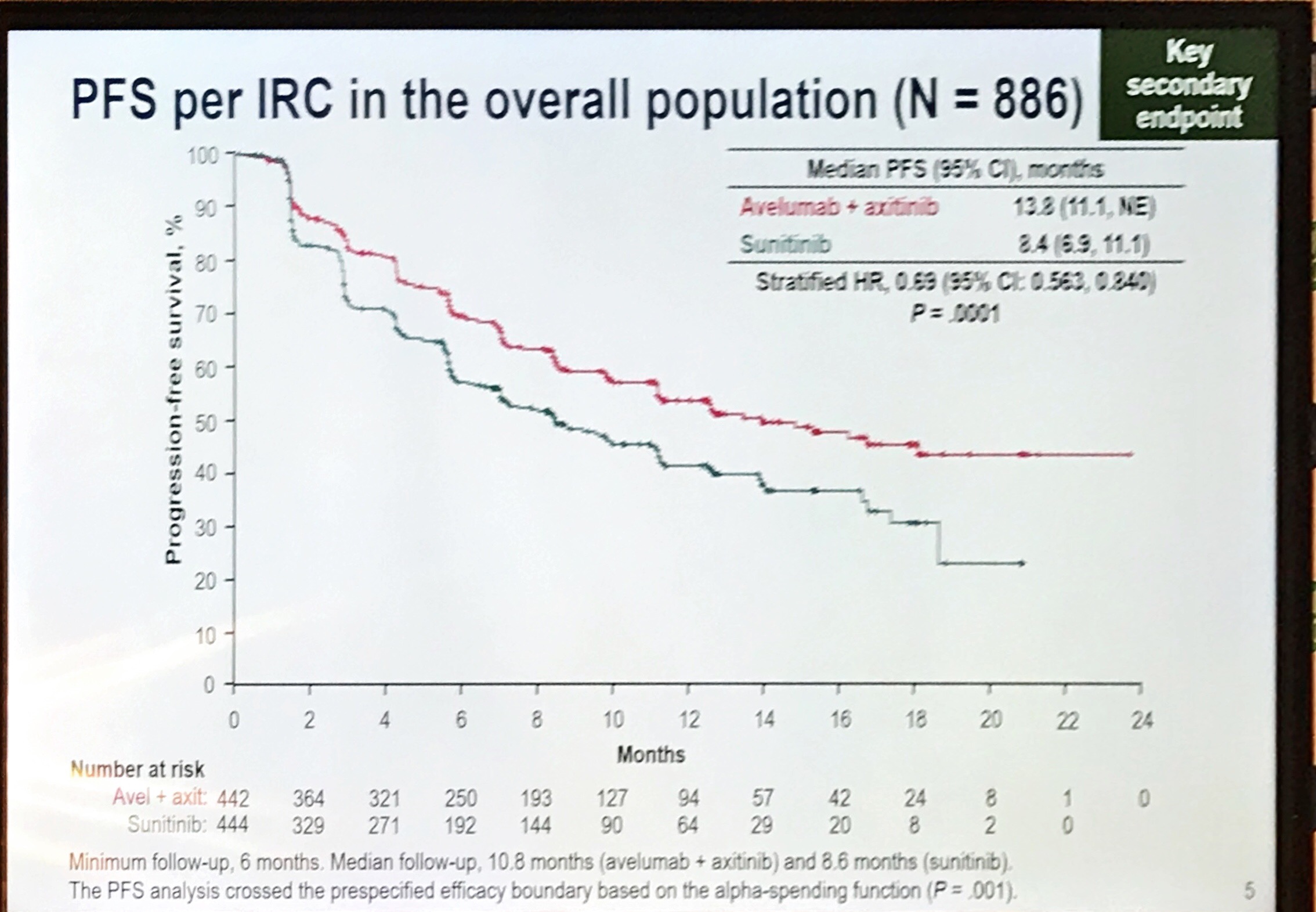 This is where Merck & Co threatens to upset things, having revealed just days ago that its own first-line renal cancer trial, Keynote-426, had read out positive for PFS as well as OS. Like Javelin Renal 101 this pits Inlyta plus PD-1 blockade – in this case Keytruda – against Sutent.

Javelin Renal 101’s chances of hitting an OS benefit could depend greatly on the benefit control-arm subjects derive from Bristol’s Opdivo, which already carries a second-line renal cancer label. Dr Motzer said his recollection was that around 30% of Sutent progressors in his trial had gone on to receive Opdivo.

He did not reveal the PFS benefit in PD-L1-negative patients, defined as expressing this protein on less than 1% of their tumour cells, but confirmed: “There was also a benefit.” This is evident considering that PD-L1-negatives made up 37% of the overall trial population, which derived a PFS benefit that was nearly as strong as that in PD-L1-positives.

PD-L1-negatives and OS aside, Dr Motzer felt confident that Javelin Renal 101 data were strong enough to make Bavencio plus Inlyta a new first-line standard of care for renal cancer patients. This would hit Exelixis’s Cabometyx, which thanks to the Cabosun trial already has a first-line label in all-comers.

Perhaps the most intriguing aspect of the data is what they mean for Bristol, whose Opdivo plus Yervoy combo is approved, based on the Checkmate-214 trial, in first-line renal cancer patients who have an intermediate or poor prognosis. Good-prognosis Opdivo/Yervoy recipients in Checkmate-214 derived no added benefit versus Sutent.

This is why the Javelin Renal 101 data cut by prognosis score is so important. This analysis was not revealed at Esmo, but Dr Motzer stated: “The benefit was regardless of risk group.” This could put clear blue water between Bavencio/Inlyta and Opdivo/Yervoy, and give Bristol’s struggling immuno-oncology franchise another headache.

Dr Motzer said other biomarkers, like tumour mutation burden, were not particularly predictive in renal cancer, which is amenable to treatment with checkpoint blockade thanks to its high immunogenicity.

As for toxicity, Javelin Renal 101 showed a reasonably even split of serious adverse events, with discontinuations more common among control subjects; Sutent is known to have more liver toxicity than Inlyta, one reason why the latter was chosen for combination with Bavencio.

A final piece of the puzzle that is often underappreciated at medical conferences is how things will play out in the marketplace. And here Pfizer could have the last laugh, given that it owns Inlyta as well as having rights to Bavencio.

Even if Keynote-426 ends up trumping Javelin Renal 101 on overall survival Merck & Co’s reliance on the Inlyta half of its combo, versus Pfizer’s ability to bundle the two products together, could limit Keytruda’s reach.