A dramatic extension in progression-free survival in Astrazeneca's Solo-1 study raises the prospect of improving cure rates in ovarian cancer, though the impact remains restricted to BRCA-positive patients for now.

Hopes were high for Solo-1, the first pivotal study of a Parp inhibitor in an early-stage setting, and the details do not disappoint. Ovarian cancer patients treated with Lynparza as first-line maintenance therapy experienced three more years of progression-free survival than those given placebo, a finding described as unprecedented by physicians at Esmo.

Solo-1 recruited only BRCA-positive patients, a group known to be highly responsive to Parp inhibitors, and regulatory approvals for Astrazeneca and Merck & Co’s Lynparza are surely on their way. This mutation is only found in around 20% of ovarian cancer patients, however, and while many expect the class eventually to demonstrate broader utility it seems unlikely that substantial off-label use will occur just yet.

“I think it would be premature to move this outside of BRCA right now,” Dr Kathleen Moore of Stephenson Cancer Center in Oklahoma, the primary author of Solo-1, told journalists at the conference. “There was a really large database across multiple biomarker subtypes in the platinum-sensitive recurrent setting, and right now we don’t have that in front line.”

In the second-line recurrent setting, which is when the disease is no longer considered curable, Parp inhibitors are approved to treat patients regardless of BRCA status. Efficacy is notably stronger in patients who carry the faulty gene, which signals a broken DNA repair mechanism called homologous recombination deficiency. BRCA is only one cause of HRD; there are various other forms found in around half of ovarian cancer patients, and these also leave tumours susceptible to Parp inhibition, although to a lesser extent.

Screening techniques to detect HRD are not particularly sensitive, Dr Jonathan Ledermann of University College London’s Cancer Institute told Vantage. So in later lines of therapy, where the disease is recurrent, physicians are prepared to try Parp inhibitors in all patients.

Dr Ledermann believes that a broader benefit will eventually be seen in front-line ovarian cancer, but agrees that at this stage there are few reasons to use Lynparza in all patients.

“I would put money on Parps having a benefit in non-BRCA patients first line; the question is whether it will be strong enough to change practice,” he said.

If benefits on progression-free survival are similar to those seen in the second-line setting then physicians might decide to reserve Parp inhibitors for later lines of therapy, outside BRCA-positive patients, he said.

This is an important question that needs answering before the markets can work out the real commercial potential of these agents. The first-line maintenance setting is considered a blockbuster opportunity in its own right, but limited use beyond BRCA would put a ceiling on forecasts.

The primary endpoint of Solo-1 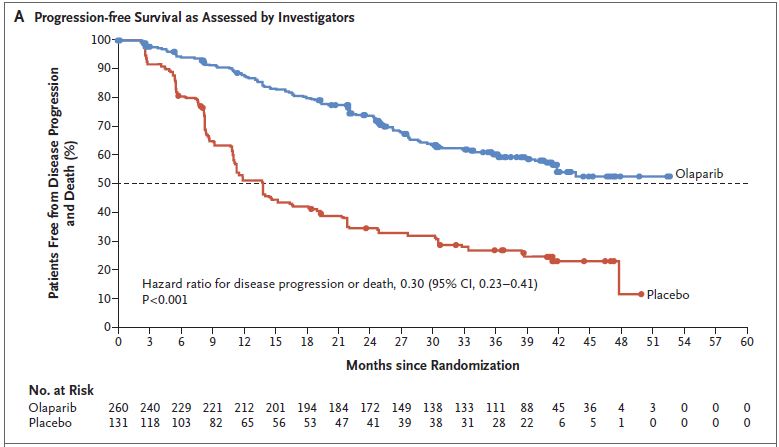 Still, it is undeniable that the outcome of Solo-1, already known to be positive for PFS, was at the high end of expectations. Dr Ledermann believes that the medical community is likely to want to start using Lynparza front line immediately.

The most marked response was seen in the PFS curves: at three years 60.4% of patients were progression free in the Lynparza group, versus 26.9% in the control arm. At the time of this analysis median PFS had not been reached in the Lynparza group; for placebo patients this amounted to 13.8 months.

After a median follow-up of 41 months risk of disease progression or death was 70% lower in the Lynparza group than for placebo.

Overall survival data have yet to mature, so questions remain, but it was hard to miss the excitement that these data caused at Esmo.

“There’s real hope that this treatment will lead to increased cure rates. We need to wait for that evidence, but this is a big step forward,” Dr Ledermann said.

Solo-1 selected for patients with a very good prognosis, so this evidence will take some time coming: at this analysis 84% of Lynparza patients were alive, versus 80% for placebo.

Evidence of this class’s efficacy in a wider front-line setting beyond BRCA will come sooner, however, from two trials that are recruiting patients regardless of tumour mutation status.

Further out is Tesaro’s Prima study of Zejula; this differs from Solo-1 in that it allowed patients with much worse prognosis, who would be expected to progress more quickly. Prima should read out towards the end of next year.

It will not be long before this class reveals its potential in front-line ovarian cancer. The strength of the Solo-1 data means that many will now be thinking big.

Esmo 2019 – Clovis is running out of waves to catch