A miss for Roche’s Akt inhibitor in advanced breast cancer leaves questions over population and combination.

If the first data from the pivotal Ipatunity-130 trial of Roche’s ipatasertib show a failure, at least they show a pleasingly symmetrical one. Presented at Esmo’s virtual meeting, they show that progression-free survival, response rate and response duration were all exactly the same in the treatment and placebo arms.

The failure is something of a surprise given the antigen profile of the trial’s participants and a prior success in a similar population – albeit a different disease. Overall survival follow-up is ongoing, but the future of ipatasertib in advanced breast cancer could now depend on trials in combination with endocrine blockade.

Cohort B of Ipatunity-130 consisted of 222 patients whose advanced breast cancer was HR-positive, Her2-negative and PIK3CA/AKT1/PTEN-altered, and suitable for chemotherapy. Two thirds of them received ipatasertib plus paclitaxel, while the control group got paclitaxel plus placebo.

The data, presented by Dr Nick Turner of the Royal Marsden NHS Foundation Trust in London, show near-identical PFS curves for the two cohorts, with the hazard ratio showing zero reduction in risk of progression for the Roche project . 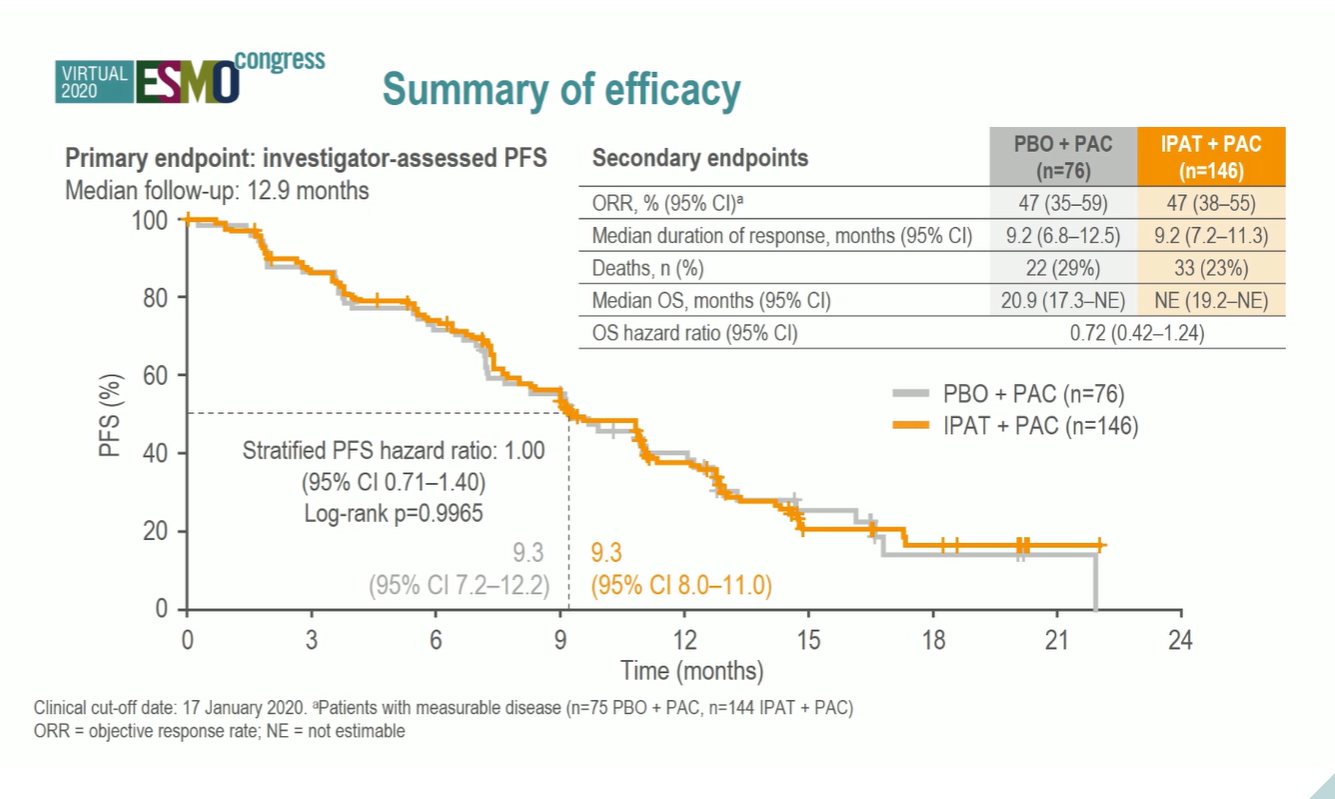 A PI3K/Akt inhibitor like ipatasertib might have been expected to work in patients whose tumours were PIK3CA/Akt1/PTEN-altered. PTEN – phosphatase and tensin homologue deleted on chromosome ten – is the negative regulator of the proto-oncogenic PI3K/Akt pathway.

Ipatential-150, in first-line prostate cancer, did show a benefit with ipatasertib in PTEN-altered subjects, but not in all-comers (The ipatasertib curate’s egg, June 19, 2020). This study will be the subject of a presidential session at Esmo on Sunday.

But in breast cancer ipatasertib has shown promise in a different group of patients: those whose tumours were PTEN-low, Jefferies analysts point out. In the phase II Lotus study in triple-negative breast cancer, placebo-adjusted overall survival benefit was larger in patients with PTEN-low tumours than in PIK3CA/Akt1/PTEN-altered tumours. This was a subgroup of a larger trial, so not the most rigorous analysis, but it could be food for thought.

Another question is whether combining additional mechanisms with ipatasertib might yield better results. Dr Turner pointed to the phase II Faktion trial of Astrazeneca and Otsuka’s Akt inhibitor capivasertib with the oestrogen antagonist fulvestrant. This combination yielded significantly longer PFS versus placebo and fulvestrant.

Dr Turner suggested that “endocrine blockade may be critical for the activity of Akt inhibitors in the HR-positive setting”. The Ipatunity-150 study, adding ipatersertib to fulvestrant and Ibrance, is under way, but will not report for a couple of years.

There are still two more cohorts of Ipatunity-130 to come. Cohort A compares the same two regimens in triple-negative disease, and will be analysed independently. Cohort C seeks signals of efficacy and evaluate the safety of a combination of ipatasertib, paclitaxel and Tecentriq in PIK3CA/Akt1/PTEN-non-altered patients.

Maybe these will disinter some valuable data. Or maybe cohort B’s overall survival analysis will come in positive – though this seems unlikely, and in any case PFS was the primary endpoint. Moreover, any positive showing will have to balance the additional adverse events seen when ipatasertib was added to paclitaxel, including notably higher rates of nausea and diarrhoea.

Ipatasertib is forecast to top $1.1bn in worldwide sales in 2026, according to EvaluatePharma’s consensus; the Jefferies analysts give it a 40% probability to launch.