Later cuts of Tropics-02 make for better reading, but in Her2-driven breast cancer Gilead’s Trodelvy will remain a footnote to Enhertu.

Hopes of an improving survival signal for Trodelvy in the disappointing Tropics-02 trial were the glimmers that Gilead had to hold on to coming out of Asco. Data to be presented at Esmo this weekend point to redemption of sorts, a newly released late-breaking abstract suggests.

This shows the overall survival benefit jumping from an underwhelming 1.6 months over control to a more respectable 3.2 months, with the hazard ratio improving to 0.79 and moving into statistical significance. Gilead had previously described this finding as “clinically meaningful” without providing actual numbers, and the absolute benefit shown is at the top end of expectations.

Whether this matters much is the big question. This is because of the performance of Astrazeneca and Daiichi's breast cancer rival, Enhertu, in the Destiny-Breast04 trial, which was conducted in a similar ER-positive and ostensibly Her2-negative population. That study wowed Asco and has established the concept of Her2-low disease.

True, direct comparison of the two datasets is imperfect: Tropics-02 recruited later-line patients with a poorer outlook, and included those without any Her2 expression. But the impressive Enhertu result means that it is already assumed that Trodelvy will be consigned to a salvage setting.

That perception is unlikely to shift with these latest data. However, clear signs of activity in a subgroup of Tropics-02 patients with no detectable Her2 receptor, deemed Her2 zero, on top of the the strengthening OS data, should bolster Gilead's case that Trodelvy does have a role to play in some ER-positive breast cancers. 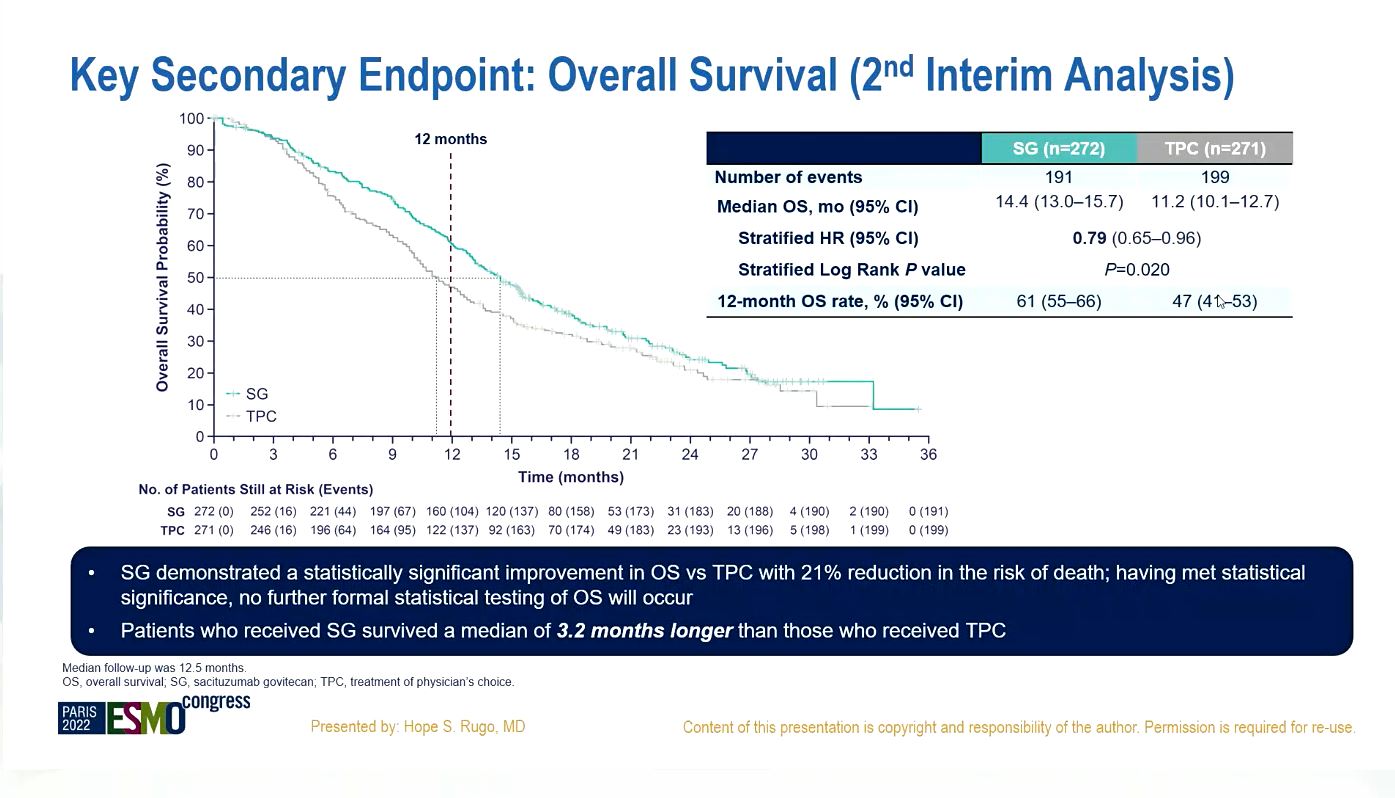 Discussing the Tropics-02 data at Esmo, Dr Meritxell Bellet Ezquerra, from Vall d'Hebron Institute of Oncology, said: “No doubt this is a statistically positive trial. [It is] clinically meaningful and should lead to regulatory approval.”

Still, Enhertu casts a long shadow. Asked about Trodelvy's positioning, University of California San Francisco's Dr Hope Rugo, the Tropics-02 lead investigator, told Esmo that she would use the drug in Her2-zero disease.

In terms of expectations, Morgan Stanley noted recently that consensus among investors was sitting around a 2-2.5 month OS benefit for Trodelvy over chemo. The bank’s analysts calculated that the benefit could fall within a 1.8-3.3 month range; SVB Securities thought that at least a 20% improvement over control would emerge.

This means that the actual numbers will come as a positive surprise, particularly as some were not expecting any meaningful improvement. It seems that OS has followed PFS with a late separation of the survival curves.

Why this happened is unclear. Biomarkers – Trodelvy is a conjugate targeted at Trop2 – might be playing a role. However, the trial enrolled during the Covid pandemic, and a lot of patients dropped out owing to progression before their first scan, Jefferies analysts wrote recently, citing the trial’s primary investigator. This could mean that those who made it to the first or second scans were relatively healthier or more robust.

However, the Destiny-Breast04 result still looks much stronger, the problems with such a comparison notwithstanding. In that trial Enhertu generated a 6.4-month median OS benefit and 0.64 hazard ratio (p=0.003).

The numbers behind this – median OS was 23.9 months for Enhertu versus 17.5 months for control – illustrates how the Breast04 population had a better prognosis in the beginning. The trial was essentially conducted in a second-line setting, while Tropics-02 subjects were at least third line.

Another cut of Tropics-02 data being presented at Esmo does allow a slightly better comparison to be made. This shows PFS for the Her2-low and Her2-zero subgroups, with a stronger performance in the former but a decent enough result in the latter, albeit with a confidence interval that touches 1 at the upper bound.

Destiny-Breast04 did not allow patients deemed Her2 zero, and is therefore closer to the Her2-low subgroup. On median PFS, Enhertu generated 10.1 months versus 5.4 months for control, for a hazard ratio of 0.51 (p<0.001).

It is not inconceivable that Trodelvy could produce a more competitive result in an earlier setting. But proving that would be an expensive undertaking, and Gilead is already under pressure to justify the $21bn it spent acquiring the drug via Immunomedics.

In breast cancer Gilead’s focus is in triple-negative disease, where Trodelvy is already approved third line. Considering Enhertu that feels like a wise niche in which to sit, but the company could be forgiven for wondering “what if?”

This is an updated version of a story published earlier.

The Esmo conference takes place in Paris on September 9-13. A recording of a discussion between Jacob Plieth and the biotech investor Brad Loncar about the meeting's themes is available below: