An investigator asks whether the haemophilia project, which has already been linked with toxicity concerns, should be given to elderly patients.

Sanofi is already facing delays to one of its key pipeline assets, the universal haemophilia project fitusiran. Now an investigator in one of fitusiran’s trials, Atlas-PPX, has admitted that she would think twice before giving the agent to older patients, citing the risk of blood clots.

The researcher, Professor Gili Kenet of the Sheba Medical Centre in Israel, added: “I would not expose a patient with cardiovascular risk factors to a therapy that may endanger him. We’re trying to rebalance here, but we don’t know what is the limit of rebalancing.”

Atlas-PPX evaluated fitusiran, a small interfering RNA targeting antithrombin, in patients with or without inhibitors switching from prophylaxis with factors or bypassing agents. It used the 80mg once-monthly regimen that Sanofi has since discontinued following blood clot scares.

The theory is that thromboses were triggered when antithrombin levels got too low: around 10% of normal. The new, lower dosing schedule, starting at 50mg every other month which can then be increased or decreased, aims to get patients’ antithrombin levels into the 15-35% range (Ash 2021 – Sanofi takes its time with fitusiran, December 14, 2021).

But Professor Kenet noted that the jury was still out on even this conservative approach. “We’ll have to wait several years for more studies to assess whether 15-35% antithrombin is safe and for whom it is safe,” she said during a late-breaking session at the International Society on Thrombosis and Haemostasis in London on Sunday.

Last year, Sanofi pushed the estimated filing date for fitusiran back two years to 2024 to factor in the time needed to test the lower dose.

Atlas-PPX enrolled mainly young patients: the mean age was 29 and 24 in patients with and without inhibitors respectively. Professor Kenet said the oldest patient in the study was 62, and that she had initially tried to convince him not to enrol because of the dangers.

The sellside has already cooled on fitusiran: consensus compiled by Evaluate Pharma puts 2026 sales at $137m, versus $500m previously.

At least efficacy continues to look good. Atlas-PPX found a mean annualised bleeding rate of 2.9 with fitusiran, versus 7.5 with prior prophylaxis. 63% of patients had zero treated bleeds during fitusiran therapy, versus 17% during prior prophylaxis. These data echo results from the Atlas-A/B and Atlas-INH trials presented at last year’s Ash meeting.

However, Atlas-PPX saw two thrombo-embolic events during fitusiran treatment period, one of which led to discontinuation. Professor Kenet noted that the patient had a history of deep vein thrombosis and should not have been enrolled into the trial.

Sanofi might be able to take some solace from the case of Novo Nordisk’s rival universal haemophilia contender concizumab – this once-daily subcutaneous project acts differently, being a tissue factor pathway inhibitor, but has also previously been linked with thromboses that led to a study pause.

Like Sanofi, Novo changed its schedule to allow individualised dosing, something that seems to have paid off. Yesterday’s ISTH late-breaking session heard results from the Explorer 7 study of concizumab in patients with inhibitors; Novo has already released the efficacy data, but the remaining piece of the puzzle was safety.

While there was one thrombo-embolic event before the pause, there were none after the restart with the new regimen.

One patient died from Covid, and the lead investigator, Dr Víctor Jiménez Yustev of La Paz University Hospital in Madrid, was asked whether this might have been a thrombosis-related death. He replied that the death had been deemed unrelated to drug, and that the patient was unvaccinated and had another risk factor, obesity.

He added that six other patients in the concizumab prophylaxis group had caught Covid but their infections had been mild.

Novo plans to submit concizumab to the FDA in inhibitor patients in the second half of 2022; the Explorer 8 trial, in patients without inhibitors, ends this month.

In an early study, the project led to 51% FVIII activity at day four and 17% at day seven. The pivotal Xtend-1 trial returned similar results, with FVIII levels above 40% for the first four days, dropping to 15% at day seven. This is a once-weekly project so it is important that it provides protection even towards the end of the dose cycle.

Dr Annette von Drygalski of UC San Diego Health scotched the idea of going less frequently than once weekly, something that Sanofi has mooted; she highlighted the simplicity of a one-size-fits-all approach. 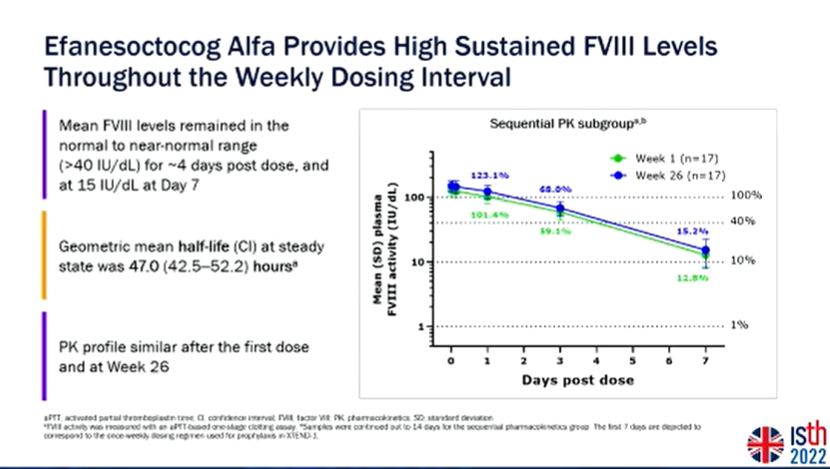