The group will need longer-term data to justify its huge valuation.

Denali’s $8bn market cap already looked rich, given the early-stage nature of the group’s pipeline. Now it looks richer still after interim phase 1/2 data on the company’s lead brain-penetrating biotherapeutic DNL310, which can at best be described as mixed.

The asset, which is being developed for mucopolysaccharidosis (MPS) II or Hunter syndrome, did spur robust decreases in glycosaminoglycans, which accumulate in patients and cause tissue and organ damage. But Denali had also been hoping to see reductions in levels of neurofilament light chain, a marker of neuronal damage – and these actually increased.

The neurofilament data came from just five patients after six months of therapy, and Stifel analysts raised the possibility that this might be too soon to see an effect. Still, much of Denali’s valuation is based on its blood-brain barrier-penetrating technology, and any doubts about this could knock sentiment. Indeed, Denali opened down 21% this morning.

The hunt against Hunter

Hunter syndrome is caused by mutations in the IDS gene that lead to a lack of iduronate-2-sulfatase, an enzyme that usually breaks down glycosaminoglycans. The current standard of care is enzyme-replacement therapy with Takeda’s Elaprase, but this does not cross into the brain so cannot address the neuropathic symptoms of disease, according to Denali.

The group hopes to address this issue with DNL310, a fusion protein comprising the IDS enzyme and Denali’s so-called transport vehicle (TV), which uses the transferrin receptor to cross the blood-brain barrier.

The company is also using its TV platform to deliver antibodies to the brain, as well as other enzymes. But all of Denali’s other TV assets are still preclinical, making DNL310 an important test case.

Based on the phase 1/2 data, which were presented yesterday at the MPS 2021 symposium, the jury is still out on DNL310. The results came from five patients in cohort A, at six months, and 12 in cohort B, at three months.

The decreases in glycosaminoglycans look promising, particularly the declines in cerebrospinal fluid heparin sulfate, seen across 15 patients, though these will need to translate into clinical efficacy.

Denali also reported improvements in the clinician and parent/caregiver global impression of change score over six months. However, the fact these data came in just five patients, with no placebo comparator, makes it hard to draw any real conclusions.

And the neurofilament light chain results could give cause for concern. This biomarker had been viewed as a more objective way of proving that glycosaminoglycans decreases were translating into a benefit in the brain, Stifel noted. 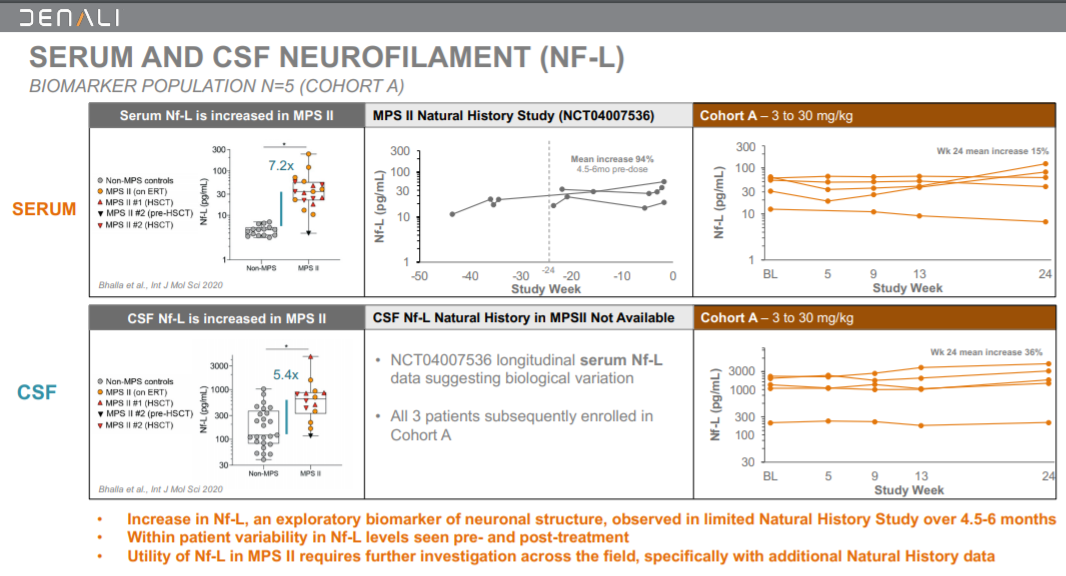 Things might become clearer with 12-month data from the same trial, due in early 2022. Meanwhile, Denali is already planning to start a pivotal phase 2/3 study of DNL310, slated for the first half of next year.

Investors will also likely be keeping an eye on safety. In the latest update one patient had two severe infusion-related reactions; the patient has remained in the study and continues to receive once-weekly infusions. Overall, 71% of subjects in the early-stage trial experienced infusion-related reactions, but this is not too different from the 57-69% rate of hypersensitivity reactions seen with Elaprase.

Elaprase made over $700m in 2020, not a bad market for Denali if it can prove it has a more effective therapy.

The only clinical-stage competition, according to Evaluate Pharma, is Regenxbio’s gene therapy RGX-121, which has already yielded interim data from a phase 1/2 trial in patients under five years, and recently went into a study in older patients.

Sangamo had been developing a genome-editing contender, SB-913, but discontinued it after disappointing data from the Champions trial.

An intrathecal formulation of idursulfase, the active ingredient of Elaprase, also fell short in phase 2/3 several years ago.

First-quarter catalysts for the smaller players