The company struggles to move the needle at the SITC meeting with an up-to-date cut of its first-line melanoma trial of NKTR-214 and Opdivo.

Nektar waited until the weekend for its big analysis of the Pivot-02 combo trial in first-line melanoma, and investors might have hoped that these data, cut as of October, would help NKTR-214 seize victory from the jaws of defeat. They will have been disappointed.

Nektar’s SITC presentation showed only one further remission versus July data, yielding an underwhelming 53% overall response rate. The group worked hard to highlight deepening responses, durability and the complete remission rate, and said the comparison against single-agent Opdivo was promising. Investors should ask themselves how relevant this all is.

The accurate comparison might not be Opdivo monotherapy but Opdivo plus Yervoy, already available for first-line melanoma with an overall response rate of 50%. It is hard to see 53% as much of an advance over this, and the best Nektar could do on an investor call yesterday was to highlight a lower rate of serious adverse events and discontinuations in Pivot-02 than with Opdivo plus Yervoy.

Its claim that the NKTR-214 plus Opdivo combo studied in the phase II Pivot-02 trial was “as good as or better” than the approved combination should be treated sceptically. Incyte’s epacadostat (an IDO inhibitor rather than an IL-2 agonist like NKTR-214) also held combination promise, but its 65% response rate in combination with PD-1 blockade melted away in the more rigorous setting of phase III.

This should set off alarm bells. Nektar yesterday detailed the extent of the pivotal programme getting under way with NKTR-214, comprising eight registrational studies in melanoma and renal, bladder and lung cancers, seeking to enrol over 3,500 patients in total.

The phase III, open-label, first-line melanoma trial alone will enrol 764 subjects to be given NKTR-214 with or without Opdivo. It is hard to see that the mid-stage data generated so far in Pivot-02 justify such a move, and the biggest endorsement of NKTR-214 remains the $1.85bn Bristol-Myers Squibb handed across to license it in February – a move looking ever more dubious. 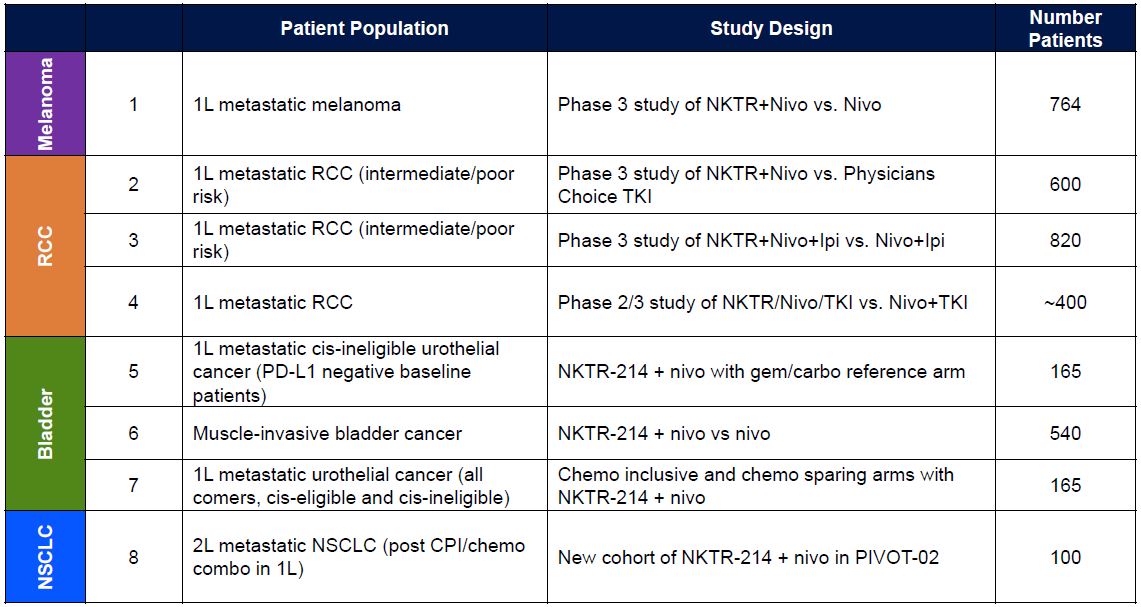 Still, Nektar bulls can cling to several arguably positive aspects of Pivot-02 that emerged at SITC. A 24% rate of complete remission suggests that responses are deepening over time, and durability data for those subjects who respond also look promising.

Nektar said 85% of all responses were ongoing at a median 7.2 months’ follow-up, and three patients are in complete remission at around a year and a half. In Checkmate-067 Opdivo plus Yervoy put 76% of first-line melanoma patients into remission for six months or more, with responses lasting from 1.2 to 15.8 months.

Safety was also highlighted, with just 5% of Pivot-02 subjects discontinuing owing to adverse events so far; the respective rate for Opdivo plus Yervoy is 40%. Serious adverse events in Pivot-02, mostly lipase elevation and atrial fibrillation, were experienced by 20% of patients, and Nektar highlighted less of the immune-related toxicity common to Yervoy.

Pointedly, however, Nektar no longer mentions its previous 65% overall remission rate target for Pivot-02 (SITC 2018 – No honey for Nektar, November 6, 2018). Investors will also have noted another pivot, namely the one towards an in-house trial of NKTR-214 plus NKTR-262, a small-molecule TLR 7/8 agonist.

This study, called Reveal, is just getting under way. Nektar’s rationale for it, detailed yesterday, includes the bizarre claim that it offers patients a “checkpoint-free treatment”, though the trial could also test a NKTR-214/NKTR-262/Opdivo triplet.

At this year’s instalment of SITC Oncosec disappointed too, reporting an overall response rate of 22% among the first nine evaluable subjects enrolled into its registrational phase II Keynote-695 trial in anti-PD-1-relapsed melanoma, testing a combination of Tavo and Keytruda.

This study had been started based on the success in the OMS-I102 trial, the subject of last year’s SITC late-breaker, where 11 of 22 subjects predicted to be anti-PD-1 non-responders nevertheless went into remission (SITC – Oncosec heats up tumours, and so might competition, November 15, 2017).

There are positive signs in Keynote-695: one of the two subjects responding to Tavo plus Keytruda had progressed on Keytruda, while the other had failed Keytruda, Yervoy and Opdivo. But, like in Pivot-02, the response rate was not enough to move the needle, and Oncosec stock crashed 50% when the SITC abstract was revealed on Tuesday.

The company’s biggest problem might simply be that the data revealed were too early. Oncosec and Nektar alike have worked hard to play up the positives, but ultimately have left the markets with a rather vague promise of jam tomorrow.

SITC event – Nektar hopes to pivot away from Incyte's failure