A Keytruda combo trial of the company’s Tavo shows an improving dataset, as remissions appear to deepen with time.

The past three years have been quite the rollercoaster for Oncosec’s Tavo, which initially suggested great promise but then failed to deliver. Now the tables could be about to turn, as results from a melanoma study, unveiled today in an SITC late-breaker, suggest that the dataset might be improving.

Perhaps the findings are still short of what had once been expected of Tavo, an electroporation-delivered IL-12 gene therapy aiming to turn “cold” tumours immunogenic and make them treatable with checkpoint blockade. But Oncosec’s undemanding valuation, $140m at last week’s close, suggests that even a marginal win could count for a lot.

The trial in question, Keynote-695, aims to enrol 100 subjects with “rigorously confirmed anti-PD-1 checkpoint-resistant” melanoma, and give them Tavo plus Keytruda. The headline number, revealed in the SITC late-breaker on 54 evaluable subjects, is a 30% overall remission rate, including three complete responses.

Two previous cuts of the data, the first two years ago and the second in early 2019, yielded ORRs of 22% and 24% respectively (More advanced Oncosec data look good, but not good enough, February 4, 2019). This was seen as disappointing given the promise of an earlier trial, OMS-I102, in which 11 of 22 predicted anti-PD-1 non-responders went into remission.

“It is possible that responses are occurring faster than reported,” he added. “However, we are not able to determine that because of a three-month interval between scans.” Oncosec claims that 10% efficacy is considered clinically meaningful, and the bar for Keynote-695, which ambitiously aims to “reverse resistance” to PD-1 blockade, is 20% ORR.

As for the false promise of the OMS-I102 trial, Mr O’Connor stressed that that had recruited patients with “cold” tumours, 10-15% of whom do actually respond to anti-PD-1. Adjusting for this yields a result in line with that seen in Keynote-695.

The point is relevant because critics might suggest that it was possible for some of Keynote-695’s participants to have responded anyway, even though they must have had progressive disease after Keytruda or Opdivo, and some had also failed on Yervoy.

Mr O’Connor rejected such a theory, saying enrolment criteria were "among the most rigorously defined". The trial was “purposefully designed to eliminate the possible contribution of prior anti-PD-1 treatment or cases of pseudoprogression”. One criticism of the data might be that responses have not yet been independently reviewed.

Interestingly, responses seemed best in patients with worse prognosis: the ORR in those with most advanced, M1c/M1d, disease was 35%, while in those exposed additionally to Yervoy it was 40%. Still, the numbers might be too small to draw firm conclusions. 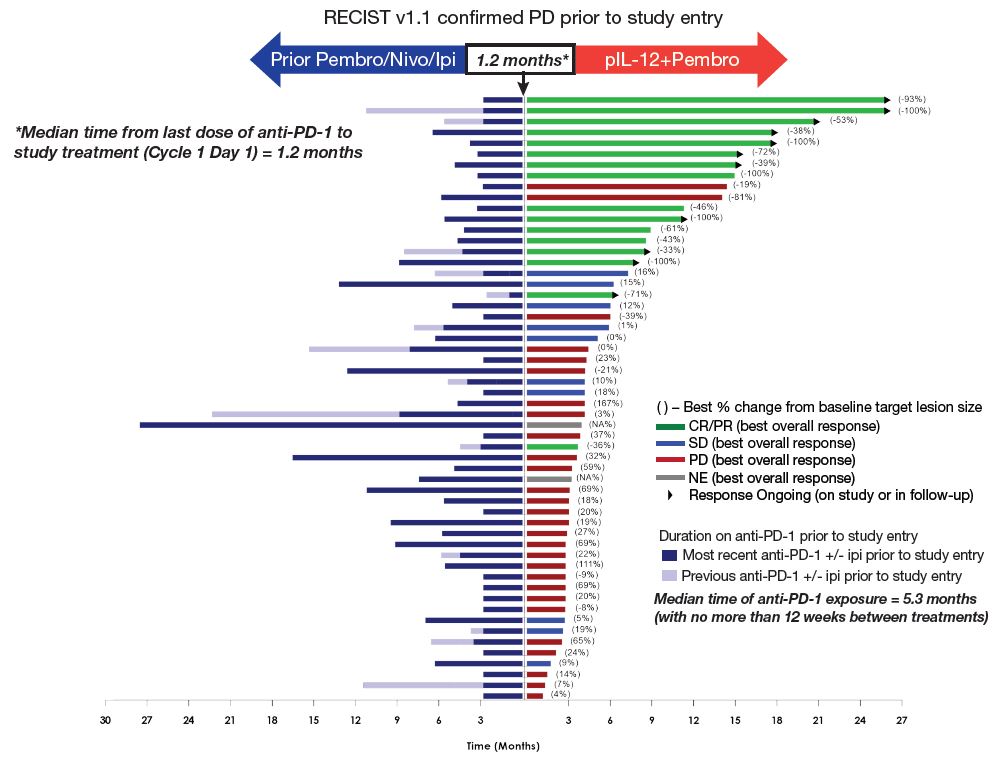 Another positive sign is safety. Cytokine therapies tend to be associated with toxicity, but in Keynote-695 just three subjects suffered a treatment-related adverse event above grade 2.

Still, there is no denying that Tavo has failed to live up to its initial hype. EvaluatePharma sellside consensus sees Tavo generating 2026 sales of $181m. But archived forecasts show how consensus has fallen: two years ago the 2024 estimate was $371m, whereas now it stands at just $105m.

The project’s slipping timeline might partly account for this; 18 months ago Oncosec was touting an early 2020 accelerated registration filing, and US approval for melanoma in late 2020/early 2021, but today it no longer mentions specific filing plans.

The company ended its July 2020 fiscal year with $20m in the bank, and raised $15m in August. Clearly it needs much more.