SITC – the morning after the night before

Nextcure found out this morning that SITC gives and it takes away. The group’s stock had surged 249% when the abstract of its presentation at this immunotherapy conference was unveiled, but the full data presented on Saturday failed to enthuse, and today reason resumed its seat: Nextcure crashed 53%.

There was better news at the meeting for Nektar, Pieris and Celyad, but for investors the Nextcure debacle should serve as a cautionary tale. The desperation for single-agent activity in PD-L1-refractory cancer is considerable, but Nextcure has now managed to wipe out almost all the gains it had made a week ago.

That enthusiasm was prompted when a second partial remission to Nextcure’s NC-318, an anti-Siglec-15 MAb, was seen in a lung cancer cohort, while an earlier partial response deepened and became complete. The group’s trial is in treatment-refractory solid tumours, and the markets were keen for additional signs of activity to emerge at the full SITC presentation.

Instead, what became apparent is how many patients NC-318 did not work in. The trial has now given the MAb to 13 NSCLC, seven melanoma, seven ovarian, four breast and three colorectal cancer subjects – without any additional efficacy being reported beyond the two already known responses.

And things got worse: the complete response had come from the lowest, 8mg, NC-318 dose, raising questions over why much higher doses appear to be relatively inactive. And Nextcure failed to back its argument for the MAb’s efficacy with any Siglec-15 biomarker data, promising only that Siglec-15 expression would be evaluated retrospectively in phase II dose expansion. 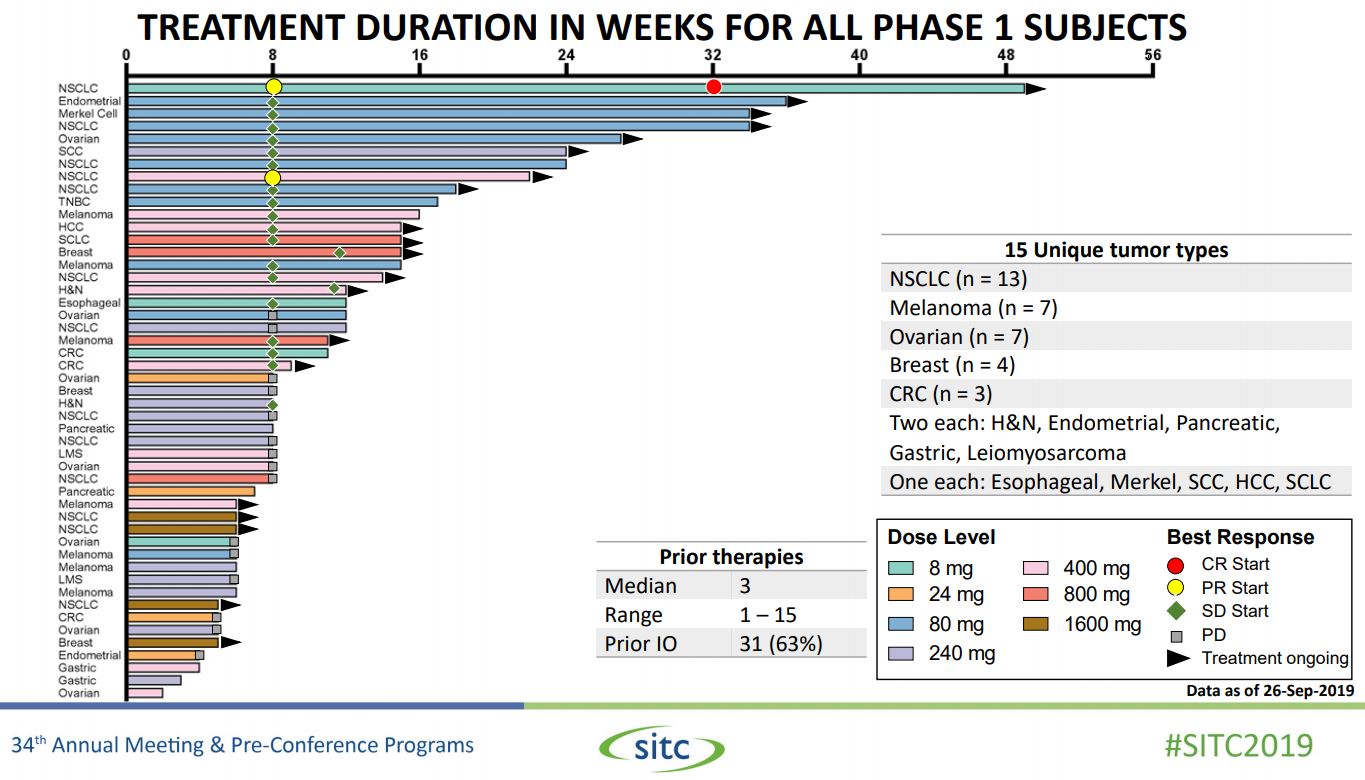 Pieris, on the other hand, did not disappoint, and delivered on a promise to show first-in-human responses for PRS-343, its Her2/4-1BB bispecific. Five of 18 evaluable Her2-positive subjects got the highest, 8mg/kg every two weeks dose, and two of these responded; no remissions were seen at lower doses.

However, while Pieris stressed that efficacy was linked to biomarker evidence of 4-1BB agonism, it is too early to say whether PRS-343 can turn “cold” tumours “hot”. One of the responders had failed treatment with Keytruda and Opdivo, but was PD-L1-positive; no biomarker data on the second were provided. Pieris opened up a cautious 2% this morning. 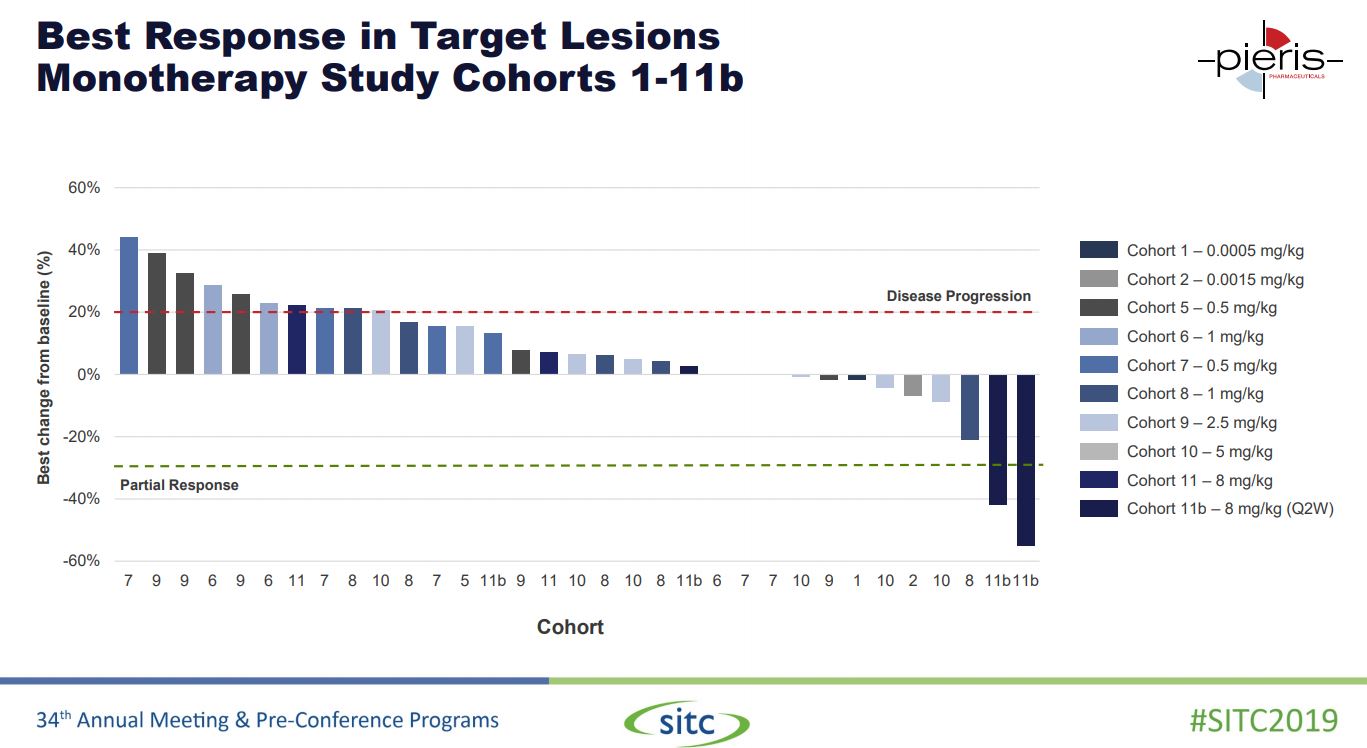 Meanwhile, Celyad’s protracted spell without any meaningful data ended at SITC, with the company making a case for allogeneic cell therapy. The AlloShrink trial of CYAD-101 has yielded two partial responses in 12 relapsed colorectal cancer patients treated so far – a respectable indication of early efficacy in this cancer.

Equally important, for an allogeneic cell therapy, is the fact that no graft-versus-host disease has been seen, and this will be monitored closely as the CYAD-101 dose is escalated; data from all 15 subjects to be recruited are expected in the first quarter of next year.

Like Celyad’s autologous lead, CYAD-01, CYAD-101 targets NKG2D ligands. Behind CYAD-101 lies a “TCR inhibitory molecule” concept to silence endogenous T-cell receptors – the cause of GVHD – though in fact this might not be Celyad’s brightest allogeneic hope: earlier-stage Celyad assets use short hairpin RNA technology to knock out the T-cell receptor.

And the last of this quartet of SITC-relevant stocks, Nektar, was up 6% this morning, though the update on its troubled Pivot-02 study was basically a rehash of data already seen at Asco. The main difference was that one previously PD-L1-negative subject in this first-line melanoma trial of bempegaldesleukin plus Opdivo was now classified as PD-L1-positive.

The company argued that the remissions it had already seen were deepening, and indeed across Pivot-02 nine complete responses had started as partial remissions. Since Opdivo plus Yervoy is already approved in this setting, on the back of similar ORR data in the Checkmate-069 study, Nektar’s best bet at present seems to be to play up bempegaldesleukin’s relatively cleaner safety.