Full data show just how big a bust Keynote-598 is, though Bristol is unlikely to abandon hope.

Keynote-598, the first-line lung cancer combo trial that failed but which for Merck & Co was really a win, showed Bristol Myers Squibb’s Yervoy adding nothing to Keytruda beyond toxicity. At today’s World Lung conference the full data laid bare the victory over Bristol that this represents.

Numerically, median overall and progression-free survival in the front-line NSCLC trial were both better with Keytruda alone than with the Yervoy combo. The Yervoy arm had over twice the number of serious treatment-related adverse events than Keytruda monotherapy, and adding the Bristol drug caused seven patients to die.

Of course, Bristol will not give up easily, and it already has approval for Opdivo plus Yervoy in certain first-line NSCLC settings. But, knowing the Keynote-598 data, doctors seem unlikely to reach for the combo in preference to Keytruda alone. In NSCLC Merck’s drug is approved in ≥1% PD-L1 expressers, and in all-comers as part of a chemo combo.

Not the whole story?

One argument Bristol might make is that median survival figures do not tell the whole story. Lung Clinic Grosshansdorf’s Dr Martin Reck, Keynote-598’s senior author, told Evaluate Vantage that a Yervoy effect could still appear late on in the survival curves, and longer follow-up was needed to see whether there was any such late benefit.

Dr Reck’s perspective is important because he was also principal investigator of the Checkmate-9LA Opdivo/Yervoy/chemo combo trial, and a member of the steering committee of Checkmate-227, whose controversial sub-analysis led to Bristol’s combo being approved in PD-L1 ≥1% expressers.

However, for now the survival curves speak loudly and clearly, with Keytruda monotherapy numerically better than the combo at virtually every point in time.

Dr Reck stressed that ‘598 had been halted for futility, and there is of course no statistical advantage for Keytruda alone. “We can’t make the point that [Yervoy adds] a deleterious [survival] effect,” he said, speculating that the combo result looked worse because of added toxicity, which led to some reduction in treatment intensity. 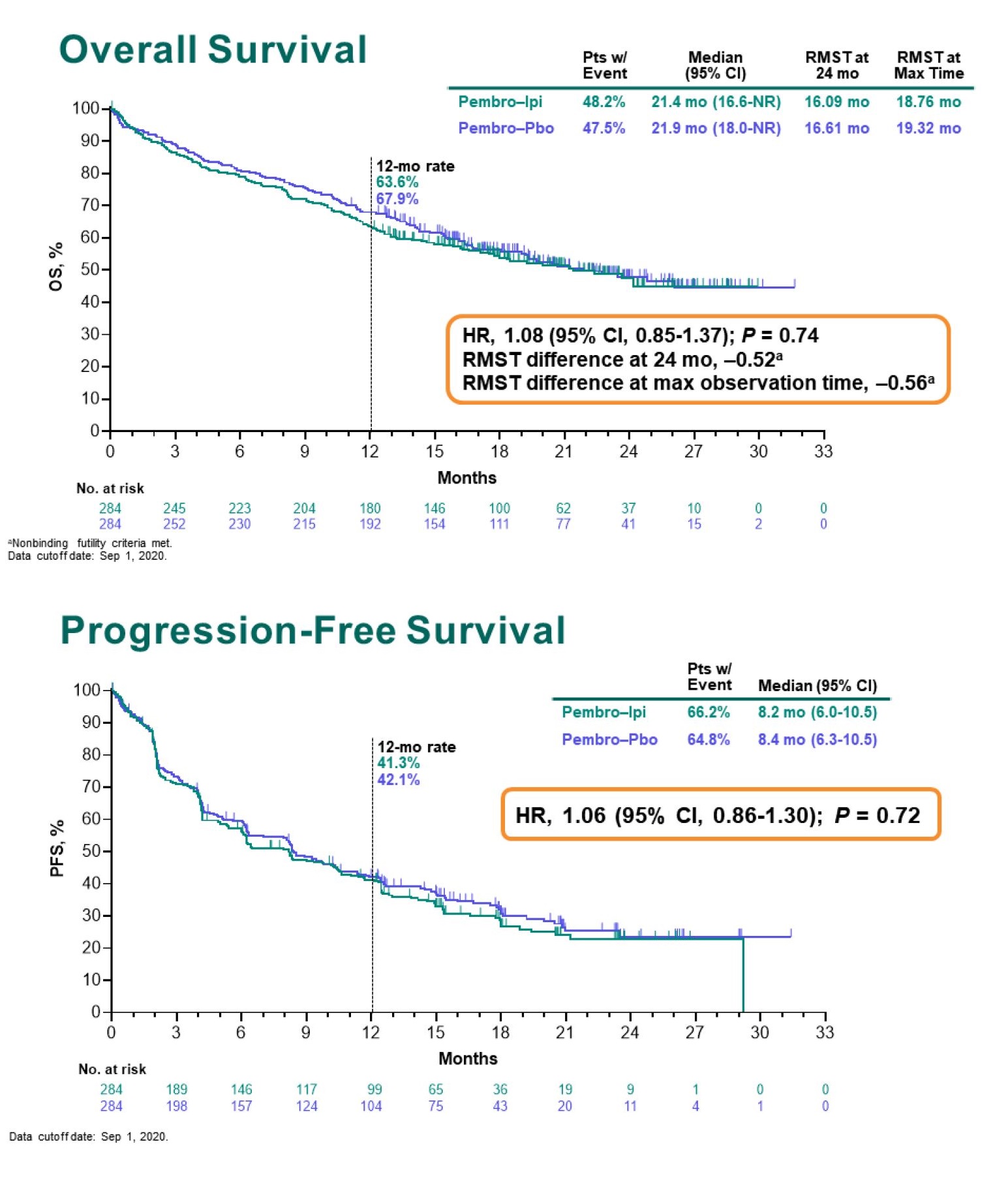 The result might have come as a surprise to those who had looked at a post hoc analysis of Checkmate-227, which suggested a 17% reduction in risk of death with Opdivo plus Yervoy versus Opdivo alone, and a hazard ratio of 0.80 for PFS. Still, ‘227 only asked whether patients expressed PD-L1 or not, with no specific look at high expressers; Keynote-598 enrolled only ≥50% PD-L1 expressers.

But Bristol has never prospectively compared PD-1 inhibition against PD-1 plus CTLA-4; doing so would of course have run the risk of a Keynote-598 type result. Merck’s chief medical officer, Roy Baynes, said to his knowledge only three tests had done such a direct comparison: the second-line Lung-Map trial, and unpublished competitor studies in head and neck cancer and adjuvant melanoma.

Whatever future survival figures might emerge in '598, Yervoy-related adverse events are clear: the Bristol drug brought with it increased risk of pneumonitis, colitis and liver enzyme elevation, and adding Yervoy to Keytruda raised serious treatment-related adverse event incidence from 14% to 28%, and caused seven patients to die versus none with monotherapy.

Despite all this Dr Reck argued that there had been logic in running such a trial in a highly selected group of strongly PD-L1-positive patients, because a chemotherapy-free regimen was preferable to one that includes chemo.

Based on the above numbers – and the fact that PD-L1-high front-line NSCLC patients can already get Keytruda monotherapy anyway – such a case is hard to make out.

So has Merck now got precisely the result it wanted? Dr Reck said he could not comment on this as a scientist. Mr Baynes steered clear of any criticism of Bristol, but said Merck had run ‘598 “to really try and understand what the contribution of CTLA-4 might be”. The data are now there for all to see.