Galapagos needs to impress with its cystic fibrosis triplet to have a hope of catching Vertex, while Abbott needs the Coapt study of MitraClip to reach a different conclusion from the last trial.

Welcome to your weekly digest of approaching regulatory and clinical readouts. Some analysts have already written off Galapagos in cystic fibrosis, but the company has a chance to turn things around, with the first data with its in-house triplet due this quarter. Galapagos will need something special if it is to compete with the leader, Vertex, and hang on to its partner Abbvie.

Vertex already has two different triplets in phase III, and recently said the first pivotal data would emerge by the end of the year. After this Vertex intends to select one regimen to take forward, a spokesperson told Vantage.

Meanwhile, the first part of the phase II Falcon trial of Galapagos’s triplet, comprising the potentiator GLPG2451, C1 corrector GLPG2222, and C2 corrector GLPG2737, is set to yield data imminently. Part one evaluates eight patients homozygous for the F508del mutation who received a low-dose fixed combination of ’2222 and ’2451 for two weeks and then the triplet for a further two weeks.

The study has various primary endpoints including change in sweat chloride concentration and FEV1.

The bar has been set by Vertex’s triplets, which in phase II showed an FEV1 improvement of around 10 percentage points. Although investors will be looking for Galapagos to come close to this, some analysts believe that an FEV1 improvement of 8-9 points might be more reasonable given the low doses used and the fact that patients will have only received the triplet for two weeks.

Part two of Falcon, evaluating ’2737 on top of high-dose ’2222/’2451 in homozygous patients, as well as those with one copy of the F508del mutation plus a minimal function mutation should report in the first quarter. Hopes are not high after disappointing data in June from the Pelican trial (Abbvie flips Galapagos the bird, again, 29 June 2018).

The results spurred Galapagos’s CF partner, Abbvie, to ditch a different triplet, comprising GLPG3067, ’2222 and ’2737, thought more promising than the Falcon regimen. If the Falcon data are similarly lukewarm Abbvie could walk away from the collaboration entirely.

In the medtech arena, off-label use of Abbott’s mitral valve repair product MitraClip was called into question two weeks ago with negative data from the Mitra-FR trial presented at the European Society of Cardiology meeting (ESC 2018 – Abbott’s MitraClip takes a knock, August 27, 2018). MitraClip is only approved for primary mitral regurgitation (MR).

Another study of MitraClip in the same setting – secondary MR – will yield data two weeks hence, and could change the prevailing wisdom.

Coapt’s primary efficacy endpoint is recurrent heart failure hospitalisations at two years, but to lay cardiologists’ doubts to rest Coapt will have to link MitraClip usage to lower rates of death. Analysing the two components of the Mitra-FR endpoint separately showed no advantage on either mortality or hospitalisation. 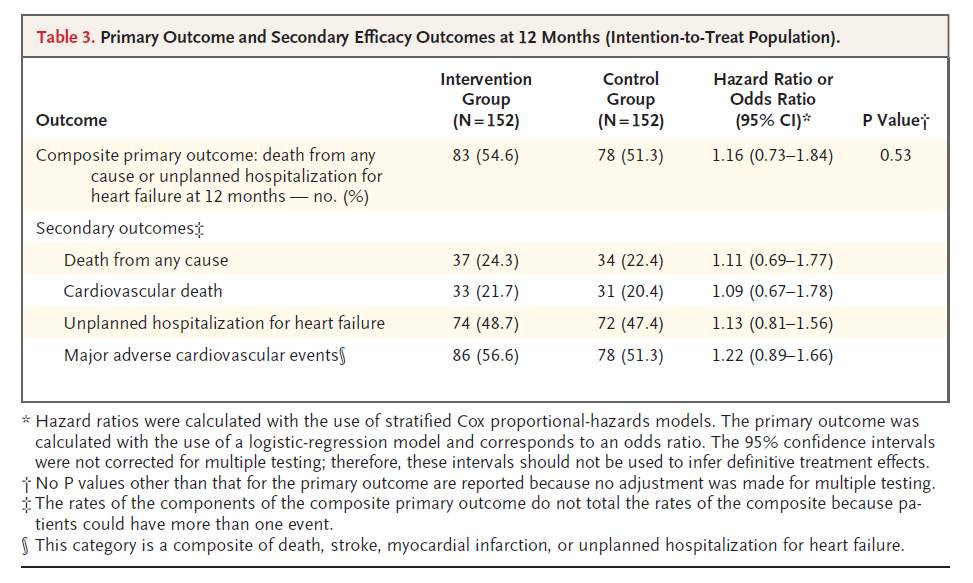 Mitra-FR's endpoints as published in the NEJM

Coapt – which, unlike the academic Mitra-FR, is sponsored by Abbott – will test the device in a less severely ill population. Patients here have a left ventricular ejection fraction of 20-50% compared with 15-40% for Mitra-FR, though the grade of heart failure in the two populations is similar. This might not help Abbott’s case, though, since it is often harder to show a benefit for percutaneous interventions over drug treatment in milder cases.

Perhaps this is why Coapt is more than twice the size of Mitra-FR, at 610 patients.

After Coapt, Reshape-HF2, an investigator-sponsored study in sicker secondary MR patients, is due to report towards the end of next year and might give Abbott something to cling to if Coapt fails.

ESC guidelines recommend the use of repair devices like MitraClip in patients with severe secondary MR and left ventricular ejection fraction of below 30%, encompassing a larger fraction of the sicker Mitra-FR patients than the Coapt population. There has been no suggestion that these guidelines should be changed as a result of Mitra-FR, but if Coapt and Reshape-HF2 both miss a groundswell could grow.