The value of listings hit a new quarterly high courtesy of Guardant and Axonics.

Last year saw the largest healthcare flotation in history – that of Siemens Healthineers, raising $5.1bn. But excluding this highly anomalous deal from Vantage’s analysis of medical device company IPOs gives a clearer picture of the underlying trends in the sector, and allows something even more interesting to emerge.

Remarkably, considering the severe slide in share prices at the end of last year, the fourth quarter of 2018 set a new record. A total of $695m was raised by device companies going public, more than any other three-month period since Vantage started tracking medtech listings in 2013.

The graph below excludes both Healthineers’ IPO and the $1.9bn listing of Convatec in 2016 in order to better focus on smaller companies raising growth capital. The analyses include only companies that make medical devices or diagnostic tests. 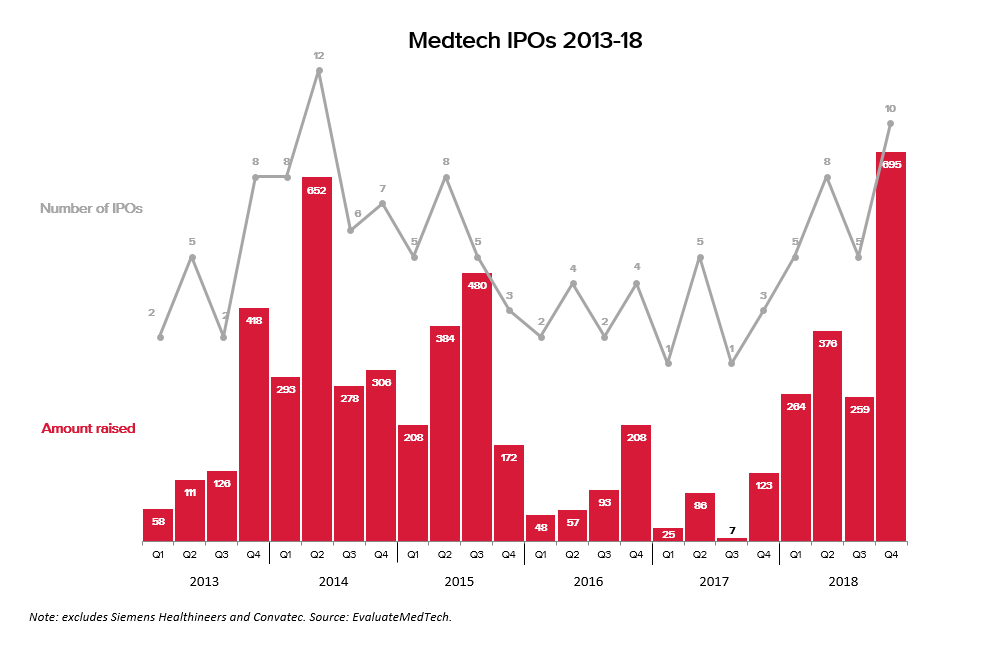 The bumper fourth quarter was spurred by the second and third largest offerings of the year: those of the liquid biopsy group Guardant Health and neuromodulation specialist Axonics, both in October and both on the Nasdaq.

The former company has done rather better than the latter. Guardant’s share price has doubled since its debut, buoyed by a third quarter beat-and-raise. A partnership with Astrazeneca under which its Guardant360 test will be developed as a companion diagnostic for the lung cancer drug Tagrisso will also have helped, and expectations are building that the FDA will approve Guardant360 for cancer-agnostic diagnosis in early 2019 – though the current US government shutdown might delay this.

Axonics, however, saw little change in its stock. This still puts it ahead of most in the class of 2018: 28 companies went public last year, and only 12 of them have seen their shares appreciate in value since.

And Inspire Medical Systems has appreciated the most, with its stock up 164% over eight months. The company, which makes systems to treat patients with sleep apnoea, raised its full-year guidance when it reported its third quarter results in November, aided by the insurance company Aetna deciding to covering Inspire therapy. The group is not yet profitable, but its net loss has narrowed from 2017.

One interesting trend in 2018 was the blaze of activity in South Korea. Seven medtech groups went out on the Korean exchange, more than twice as many than in any other year since 2013. The deals are relatively small and most were done late in the year; sadly for their investors, all but one of them has seen a share price decline.

The partial float of Healthineers might have grabbed the headlines last year, but the reanimation of the medtech IPO market after the moribund performance in 2017 is an even more compelling story.