Novel drug approvals head for a down year

With only 18 novel drugs approved by the FDA so far this year, the influential US regulator looks set to dim the green lights in 2019.

A couple of huge years for novel drug approvals have raised the bar substantially for FDA watchers, but the tally for 2019 so far suggests that a down year could be in the making. At the end of June the US regulator had rubber-stamped 18 first-to-market products – a disappointing run rate compared with the last five years.

Of course the annual numbers do fluctuate, and with few signs of a serious tightening of the regulatory climate there seems little reason to believe that a more conservative era is beginning at the FDA. Still, a Vantage analysis has identified only a further 27 novel projects awaiting judgement by the close of 2019.

The chart below shows that, if all of these are green-lit, 45 novel agents will have reached the US market by the end of this year. This would represent something of a slowdown versus the last couple of years, though to be fair it certainly would not be the kind of dip that should cause alarm.

With a new FDA commissioner settling in after a period of some upheaval perhaps this is to be expected. The regulator denied that a big drop in generic approvals in June was anything other than a phasing issue, and industry watchers will be hoping to see something of a pick-up in novel as well as generic approvals in the second half of 2019. 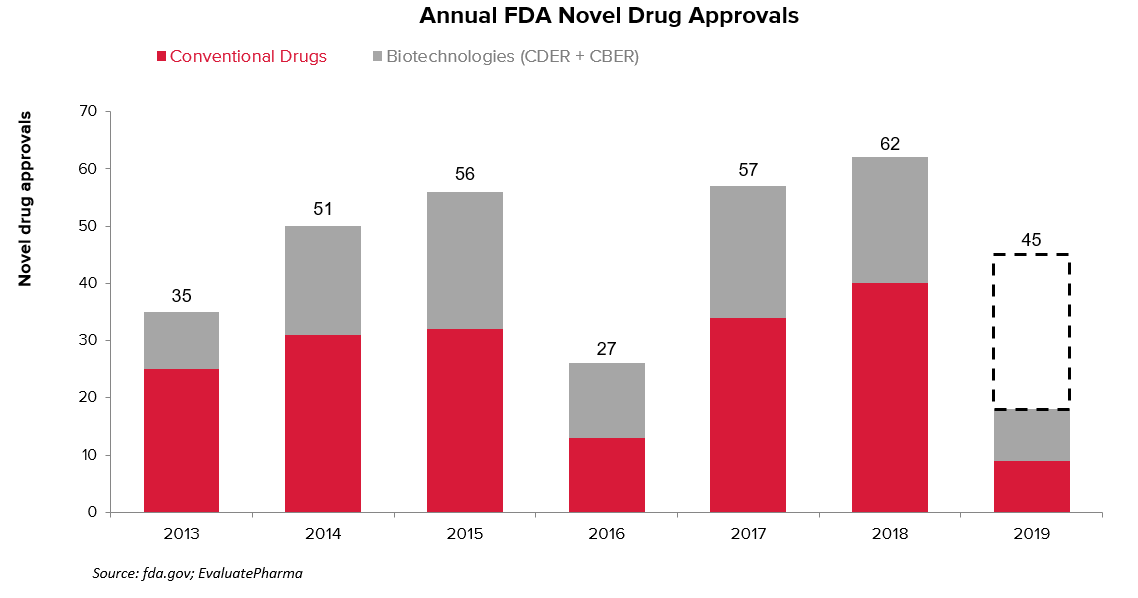 The most high-profile green light so far this year probably goes to Novartis’s gene therapy Zolgensma, for the inherited degenerative childhood disease SMA. With a price of $2.1m a year the product is not only a scientific breakthrough, it also stands as the most expensive drug in the world.

However, in terms of commercial potential, Abbvie’s new psoriasis biological Skyrizi is probably the most valuable new arrival. The sellside reckons that this anti-IL-23 antibody could generate annual sales of more than $3bn by 2024.

Another interesting agent to reach the market this year is Johnson & Johnson’s Balversa, a first in class FGFR inhibitor for urothelial carcinoma that has very much flown under the radar. This class of targeted cancer drug got some attention at Esmo last year, and could represent a field to keep an eye on (Esmo 2018 – Bile duct cancer doctors herald the age of targeted therapy, October 21, 2018).

As for the big approvals still possible this year, Sarepta watchers will be keenly awaiting a decision on that company’s potential second exon-skipping product, golodirsen, due a verdict by August 19. That said, Sarepta’s valuation now increasingly reflects its gene therapy projects.

As Bristol-Myers Squibb looks to close its takeover of Celgene, one of the latter’s key partnered assets, luspatercept, originated by Acceleron, looks to secure approval for anaemia resulting from myelodysplastic syndromes and beta-thalassaemia. The sellside reckons that revenues could breach the blockbuster threshold in 2024.

Though Nektar has tried to make a push into oncology it has an opioid analgesic, NKTR-181, due a US verdict by the end of August. And Enzyvant’s RVT-802, a one-off treatment for immune deficiency resulting from the rare childhood disease complete DiGeorge anomaly, could become the first approved drug to emerge from Vivek Ramaswamy’s Roivant stable of companies.

Roche will be hoping that entrectinib, which wowed with data at Asco, will become the latest tumour-agnostic small molecule to secure US approval. And everyone will hope that what the FDA lacks in quantity it will make up for in quality.