Novel drug approvals set to hit a new record in 2018

Amid market volatility, biotech’s best friend comes through once again: the FDA has authorised a bumper 53 new medicines so far in 2018 and several more are expected before the year is out.

With just over six weeks of 2018 remaining, the US medicines regulator is poised to set a new record for novel drug approvals. The FDA has given green lights to 53 new therapeutics this year, and a further 11 decisions are known to be pending, so that number could still rise substantially.

Last year the agency granted marketing licences to 57 novel agents, which stands as the current high point, according to a Vantage analysis of EvaluatePharma data. The FDA’s ongoing friendliness should provide investors some comfort as they ride out an ongoing retrenchment of biotech share prices. 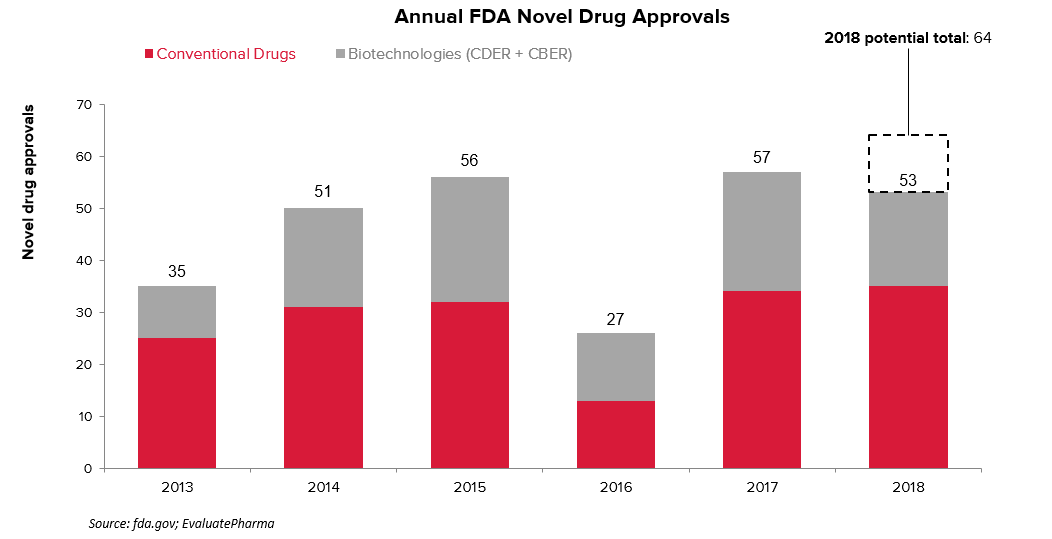 This year the regulator has ruled positively on some high-profile and high-stakes projects. Crucial verdicts that went the right way have included those for GW Pharma’s Epidiolex, Alnylam’s Onpattro and Array’s Mektovi.

Of course these rulings do not always work out – think Ionis’s Waylivra – but the sense that crossing the finish line is possible for the industry’s smaller companies has helped fuel biotech valuations in the past few years. If the current approval numbers are anything to go by, confidence in a benign regulatory environment should persist.

The biggest approval of 2018 is already in the bag: Gilead’s new HIV therapy Biktarvy, the predicted success of which is largely based on the company's existing franchise. Much more closely watched next year will be the new anti-CGRP migraine class; three contenders were approved this year from Amgen, Eli Lilly and Teva. With a combined fifth-year US sales estimate of $2.8bn, whether these prophylactic therapies will match expectations is a point of some contention.

Future sales potential is an interesting measure to track for each year's cohort of new arrivals. This has yet to be finalised for the full year, but those that have reached the market so far have a fifth-year US sales potential of $21bn – assuming analysts’ forecasts hold up. Considering the volume of new arrivals, this is actually a pretty low figure, looking historically.

A number of important PDUFA dates remain – the most notable are listed below. The projects under review include Loxo Oncology and Bayer's tumour-agnostic cancer candidate larotrectinib and a rare disease asset from Catalyst Pharma. Again, these decisions will be important for the smaller players involved.

The final number of NME approvals this year is hard to predict even at this late stage; some projects will fail to pass muster, while some decisions due in 2019 could come early. It should be noted that Vantage counts novel molecules approved by both divisions of the FDA – CDER and CBER.

Realistically, the actual number of approvals is neither here nor there – it is the trend over the long term that matters, and this clearly points to a regulator with wide open arms. Many believe that the FDA has been a major tailwind for the biotech sector over the past few years. This shows little sign of changing in 2019.