Big biotech has an image problem. Doubts about the sector’s ability to replace ageing blockbusters are causing investors to flee, and it is increasingly apparent that earnings growth is being driven by price rises and share buybacks.

A surfeit of innovation should be the hallmark of these supposed “growth stocks”, and companies like Celgene and Gilead have spent sizeable sums in their quest to find new products. At the same time they have been returning big chunks of cash to investors, mainly via share buybacks. But in many cases huge revenue holes have not been plugged, and these shareholder return schemes are starting to look like attempts to paper over the cracks.

The issue of where a company like Celgene chooses to direct its substantial cash flows becomes more contentious as the source of those funds comes closer to drying up. So a few years back, when the biotech bull market raged and investors had greater confidence in the company replacing its blockbuster Revlimid, another billion-dollar buyback raised few eyebrows.

But there are other ways to reward shareholders, for example by paying a dividend. And while there are pros and cons of both techniques investors would prefer the cash if they harbour concerns about a company’s future growth. It should also be remembered that executive compensation schemes frequently rely on earnings targets being hit, something that buyback programmes facilitate. By decreasing the number of shares in issue these programmes inflate earnings per share.

“Buybacks that are good for management are not always good for investors,” concluded Geoffrey Porges, a biotech analyst at Leerink, in a report last week. He calculated that the big six US biotech companies had spent $100bn on buybacks since 2014, programmes that overall have destroyed value for shareholders, mainly because share prices have retrenched this year.

Between 20% and 40% of the industry’s 2014-17 annualised earnings growth is directly attributable to share buybacks, Mr Porges discovered. His report followed another from Leerink that found that, over the past three years, price rises had contributed almost two thirds of new sales – $14.3bn of a total $23.3bn – added by the 45 biggest-selling drugs in the US.

Growth stocks would not traditionally pay a dividend, though as big biotech companies have matured many have chosen to do so. The chart below shows how shareholder payout strategies differ between big pharma and big biotech – the latter investing more in buybacks, and the former supporting healthy dividend payments. 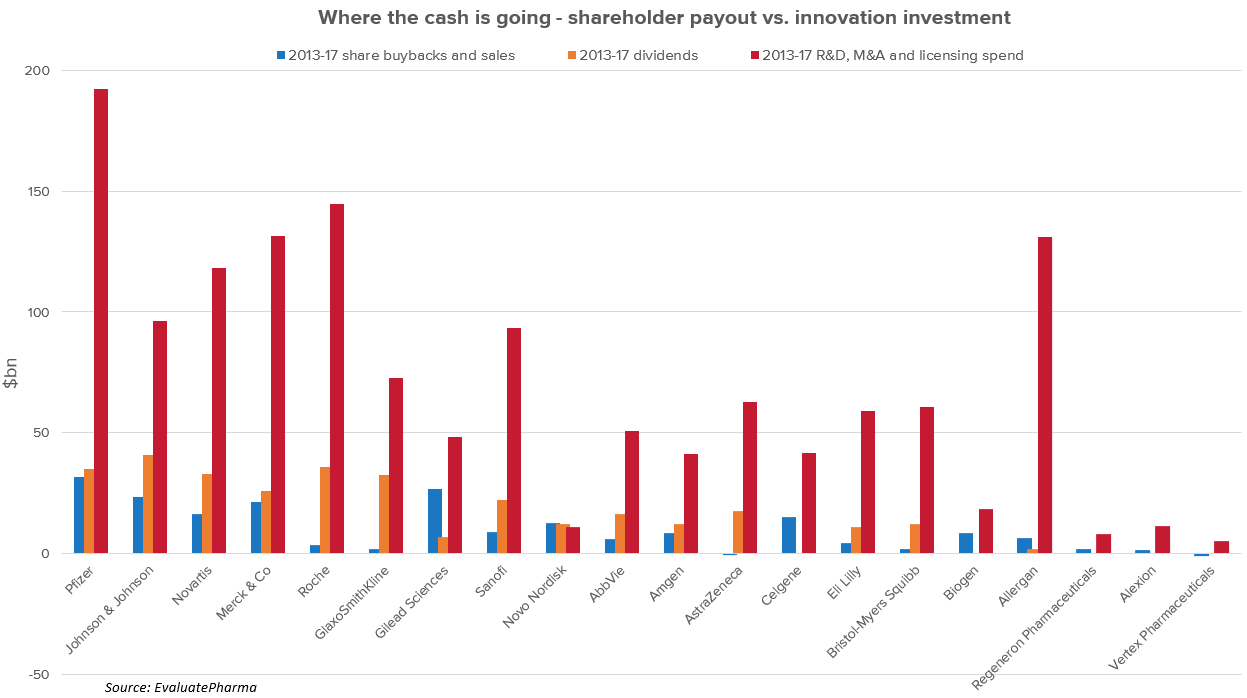 It is notable that in terms of total amount paid out in dividends and buybacks Gilead is in the same ballpark as Roche and Sanofi; it is how this is divided between share buybacks and dividends that varies.

These different strategies partly reflect the fact that pharma and biotech attract different types of investor, although the recent share price performance of certain biotech companies might suggest that they are struggling to attract any sort of investor.

Of course, another way to reward shareholders is by increasing the value of the business – for example by buying or developing new products – for which a rising share price is a proxy of success. And, over the five-year period examined here, Gilead can point to considerably stronger share price appreciation than several big pharma names.

The chart below looks at share price performance plotted against payouts. Long-term investors would presumably be interested in companies in the top right corner – those that have handed a lot of cash back and grown the value of their business. And those in the bottom left are presumably to be avoided.

A caveat here: while the payout numbers run to the end of 2017, the share price change has been measured to the end of October, to take into account the sell-off that many companies have seen this year.

Notably, Vertex alone is sitting in the area where growth stocks should be found, while Gilead and Amgen are both nestled among the big pharma names. This perhaps shows that the big biotech sector has come of age.

Mr Porges believes that rather than doing buybacks investors would be better served by biotech turning to higher dividend payments (though these tend to be more liable to tax they are more or less guaranteed), if the money cannot be better spent on buying innovation. Big business development blow-ups from the likes of Abbvie and Celgene show that scepticism about these companies’ ability to pick winners can be justified.

Should the big biotech companies continue to march towards their various patent cliffs without finding new sources of revenue, the fall from favour will continue. And these much-heralded share buyback programmes will become harder to justify. 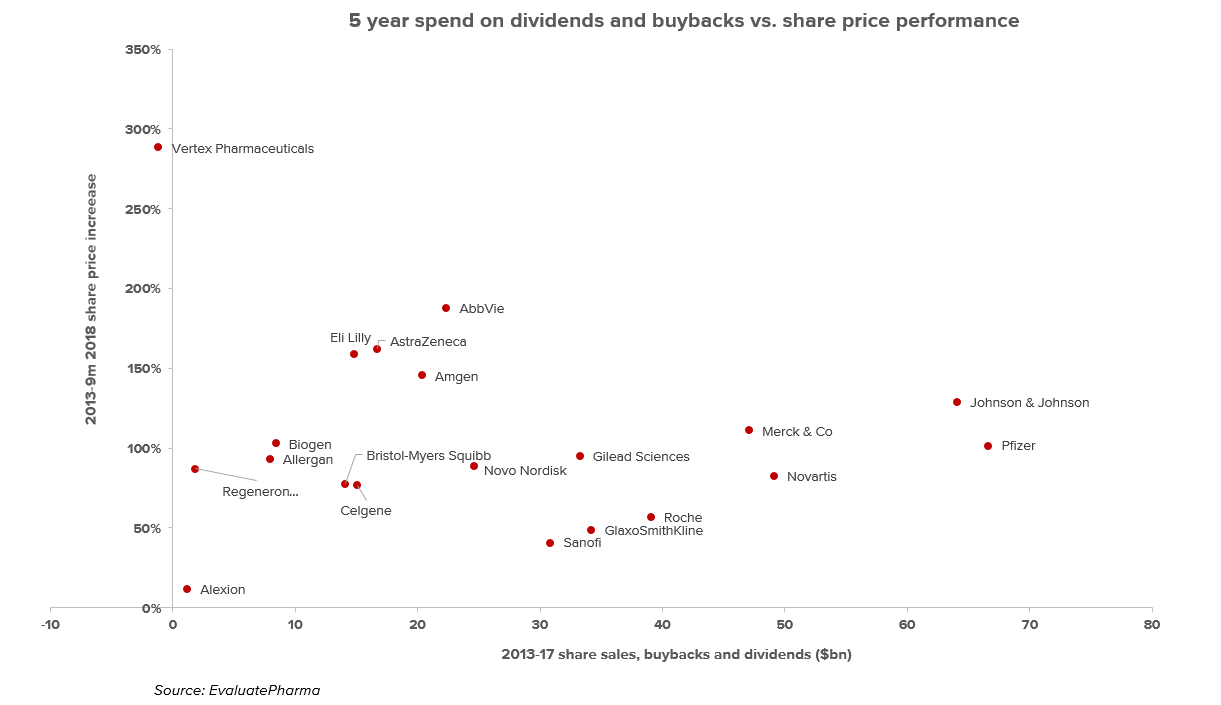