The most disputed sales outlooks in biopharma

Celgene’s Revlimid ranks as biopharma’s most contested blockbuster, with a huge spread in future sales forecasts, while drugs from Bristol-Myers Squibb and Sanofi also divide opinions.

By the time a blockbuster drug from a big pharma company is launched, executives, investors and analysts have a pretty clear consensus view of its potential. Right?

Not necessarily. Uncertainties around line extensions, competitive threats and patent expiries can drive substantially different opinions on the potential of individual products. Revlimid, for example, has a huge $11.5bn spread between the lowest and highest 2024 sellside sales forecast, making it biopharma’s most contested blockbuster, according to EvaluatePharma.

Lack of clarity around when generics will arrive en masse in the US is at the root of diverging forecasts for Revlimid. While most sellside analysts are assuming that this will happen in 2023, some see the product surviving largely intact until 2025. A crucial hearing next year should provide the answer, though some fear that the main challenger, Dr Reddy's, will be able to launch a copycat version of the multiple myeloma therapy even sooner.

Revlimid is one of the best-selling drugs in the world, and there are billions of dollars at play here. Hence the huge spread in 2024 sales forecasts, more than 10 times greater than typically seen with blockbuster products. Among marketed blockbusters the mean spread between highest and lowest forecast is $1.8bn and the median $1bn, which helps to explain why investors are so skittish about Celgene’s outlook.

Celgene’s multiple myeloma therapy is the only aged drug to make the top 10 of products with the most disputed sales outlooks. This list, as with everything in biopharma these days, is heavily tilted towards oncology; forecasts for cancer drugs are among the largest, and achieving them frequently depends on continued expansion into new indications. 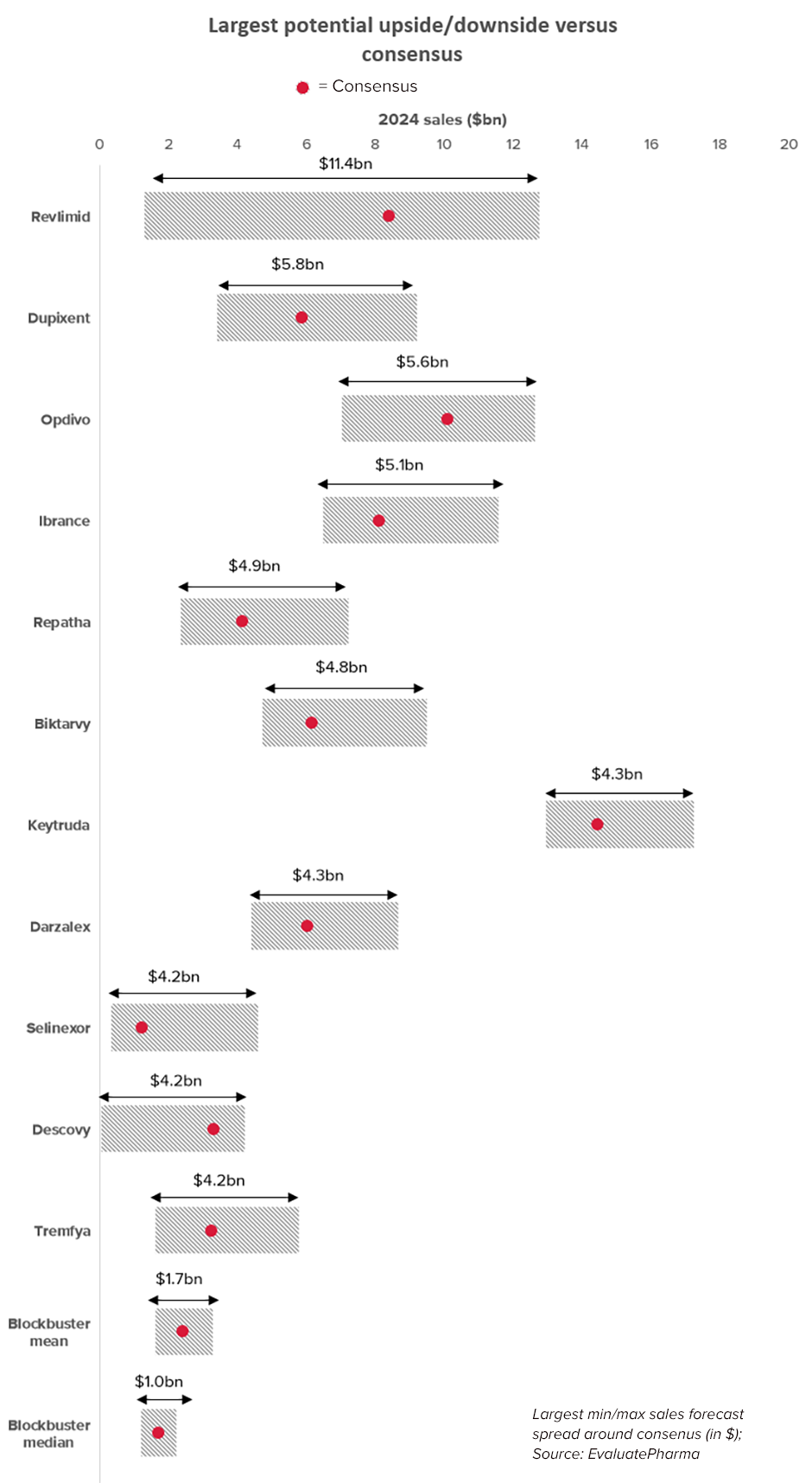 The top 10 consists mostly of products early in their patent-protected life, and highlights the need for these therapies to win additional indications to meet high sales expectations.

Take Darzalex, for example. Much has been riding on label-expansion studies, including the all-important first-line multiple myeloma trial, Maia, which last night read out positively.

There is still much uncertainty around Darzalex’s weighty 2024 forecast of $6bn, however; an unexplained price cut earlier this year shook investor confidence, and many analysts will be waiting to see how the drug fares in front-line settings to sharpen their sales predictions.

The most important PD-1 agents, Merck & Co’s Keytruda and Bristol-Myers Squibb’s Opdivo, are in dozens of trials in many combinations, diseases and stages, hence the diverging opinions shown here. But, in keeping with sector sentiment about the two products, the spread in Keytruda’s numbers is skewed to the upside, with $4.3bn in potential gains from the highest outlier versus consensus, and in Opdivo’s to the downside, with $3bn in potential losses from the lowest.

The sector has already seen how success or failure in line extensions has affected the outlook for both agents. Opdivo suffered significant downgrades and Keytruda significant upgrades when the latter won out in first-line non-small cell lung cancer.

Dupixent just won US approval in moderate to severe eosinophilic asthma, which could be worth $1.3bn in sales in 2024, and recently generated positive data in chronic rhinosinusitis with nasal polyps. Tremfya’s Crohn’s data might not come until 2022, meaning that the results will have relatively little impact on 2024 sales.

But it goes without saying that as Dupixent and Tremfya are expensive new biologicals their makers will need to be careful about pricing to remain on payer formularies. As volume increases they might be pushed for price cuts, ultimately affecting the drugs’ sales trajectories.

Getting a drug through the clinic is rife with uncertainty, and achieving sales projections is far from guaranteed, even after launch. The only time a biopharma company can feel secure in having a steady income is with mature products, and at that point, as Revlimid shows, the worries of patent expiries begin.