A handful of tumour types have disproportionately benefited from the sector’s huge push into oncology. Is the investment case weakening in certain areas?

Huge sums of money have poured into oncology R&D in the past decade and continue to do so, attracted by biological breakthroughs and the high prices that health systems are willing to tolerate when it comes to cancer drugs. The result: just under a third of the novel compounds in biopharma’s developmental pipeline sit in the oncology realm.

The analysis below, based on EvaluatePharma data, shows that there are 1,806 novel oncology projects in clinical development, more than three times as many as in the areas of infectious diseases or neurology.

One conclusion to draw from this statistic is that cancer’s gain has been other therapy areas’ loss. Heart disease remains a bigger killer than cancer, in the west at least, so the relatively small space that cardiovascular therapies occupy, in the graphic below, suggests this to be true.

Tumours can grow in all parts of the body so cancer will always be a bigger therapy area than, for example, hepatic disorders. But it seems likely that disproportionate investment has contributed to the distribution below. 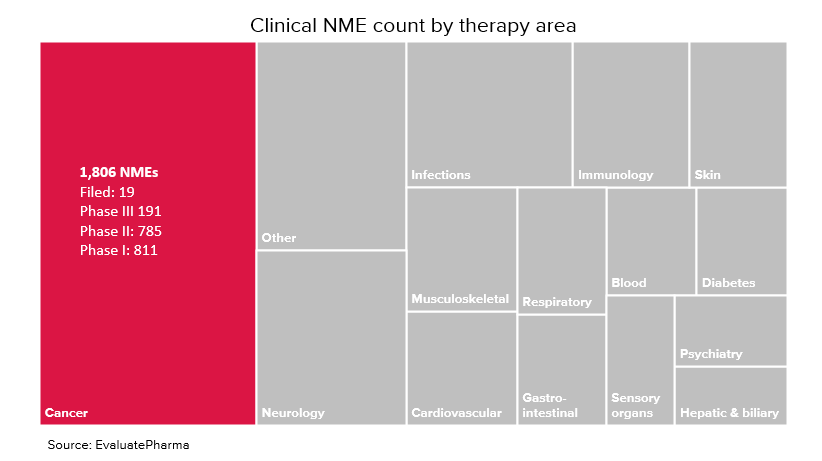 A further dig into the cancer space shows the huge disparity within this field, in terms of where the cash is flowing. Below is an analysis of ten types of cancer, looking at the five-year survival rate versus the number of novel agents that have been approved in the last five years.

Some have very short survival rates; poor prognosis can presumably be considered an indicator of a gap in the market, which should attract novel drug developers. Unsurprisingly pancreatic cancer sits in the bottom left corner; this notoriously hard-to-treat disease has seen little progress and while EvaluatePharma lists 122 projects in development, in reality a large proportion of these will surely have been quietly abandoned.

The success of the anti-PD-1 antibodies in metastatic melanoma shows that progress can never be ruled out. This very aggressive disease was long considered a death sentence, and many remain hopeful that the immuno-oncology revolution will eventually reach other intractable tumour types.

What is also notable is the relatively little work going on in oesophageal, liver and stomach cancers, diseases that also have very poor prognosis. These broad classifications will of course include different disease subtypes, some of which are very rare, which also helps explain the size of clinical pipelines.

But for developers working in the ever more crowded cancer space, a niche with few competitors and a poorly-served patient population would presumably be worth looking at. 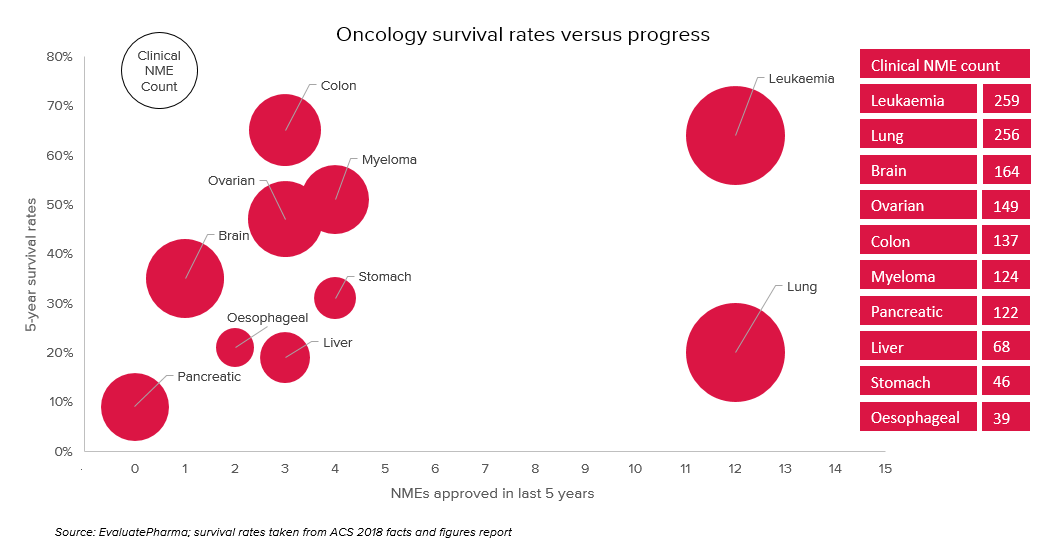 Occupying the top right hand side of this chart is leukaemia, a field that has seen huge progress and huge investment. This disorder has the largest number of clinical-stage assets in this analysis, and the best survival statistics, so developers must have a watertight investment case to push forward novel projects here.

The analysis below further underlines this. This plots the combined cost of all ongoing clinical trials in various indications against the number of novel agents in development. Non-Hodgkin lymphoma and acute myeloid leukaemia both feature on the right of this chart, indicating very crowded spaces.

It is non-small cell lung cancer that really stands out here. This tumour type has attracted the most cash – EvaluatePharma Vision* estimates that the cost of all ongoing NSCLC studies amounts to $16bn – and as a result there are more novel agents under investigation than in any other cancer. Lung cancer has long counted as one of the biggest killers: the World Health Organisation listed it as the sixth biggest cause of mortality in 2016.

It could be argued that this statistic justifies the level of investment that NSCLC receives. And the success of immunotherapies means that many will be hoping that lung cancer moves down the WHO's list in coming years.

But the huge amount of money that has gone into NSCLC and other cancers like breast and prostate means that companies must have a very strong reason to put more money into work in these diseases. These graphs pinpoint the highly competitive spaces in oncology that must be approached with caution by both developers and investors in cancer-focused biotechs. 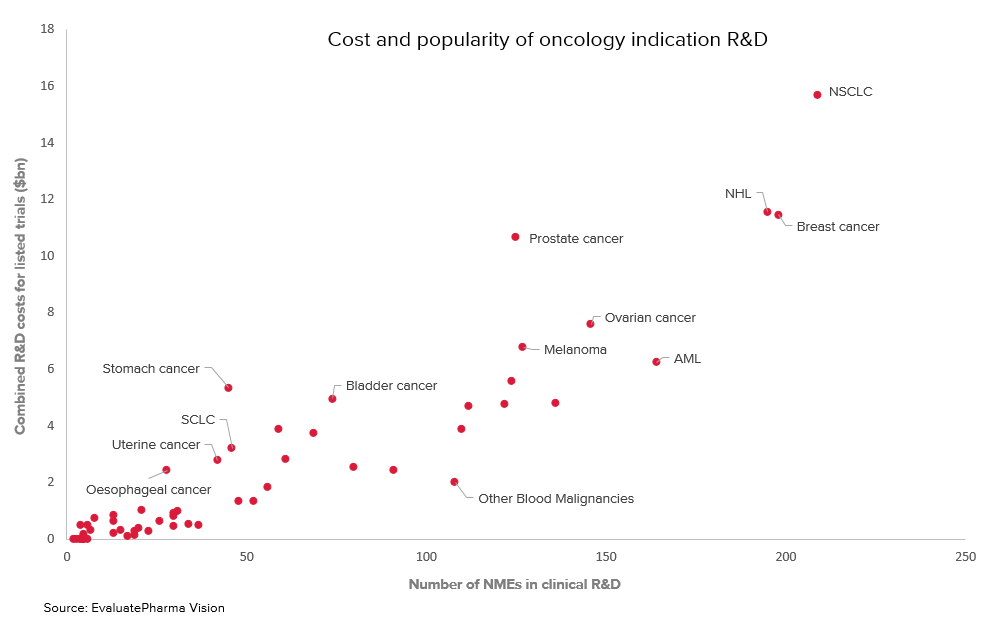 Move over Humira, it's the cancer antibodies' turn at the top

What now for low-cost PD-(L)1 competition?