The smaller company believes that its complement C3 inhibitor could make Soliris and Ultomiris redundant in PNH.

Apellis, as a challenger in the complement-related disease space, already had a hard task ahead as it sought to go up against Alexion. But that task has just got even tougher, with Alexion soon set to become part of Astrazeneca.

However, Apellis is up for the fight, buoyed by the belief that in the C3 inhibitor pegcetacoplan it has an asset that goes to the root of the complement cascade. The company hopes that this will give it the edge over C5 inhibitors like Alexion’s Soliris and Ultomiris in paroxysmal nocturnal haemoglobinuria (PNH).

“Whether it’s Alexion or Astrazeneca, it’s not the right way of targeting the disease,” Apellis’s chief executive, Cedric Francois, tells Evaluate Vantage. “C5 is too little too late. I think in a couple of years treating a PNH patient with those drugs would be like treating somebody with an ulcer with Zantac.”

PNH is caused by overactivation of the complement system, which leads to chronic red blood cell destruction and severe anaemia. The only approved therapies are Soliris and Ultomiris, anti-C5 antibodies. Pegcetacoplan works upstream of these, inhibiting C3. 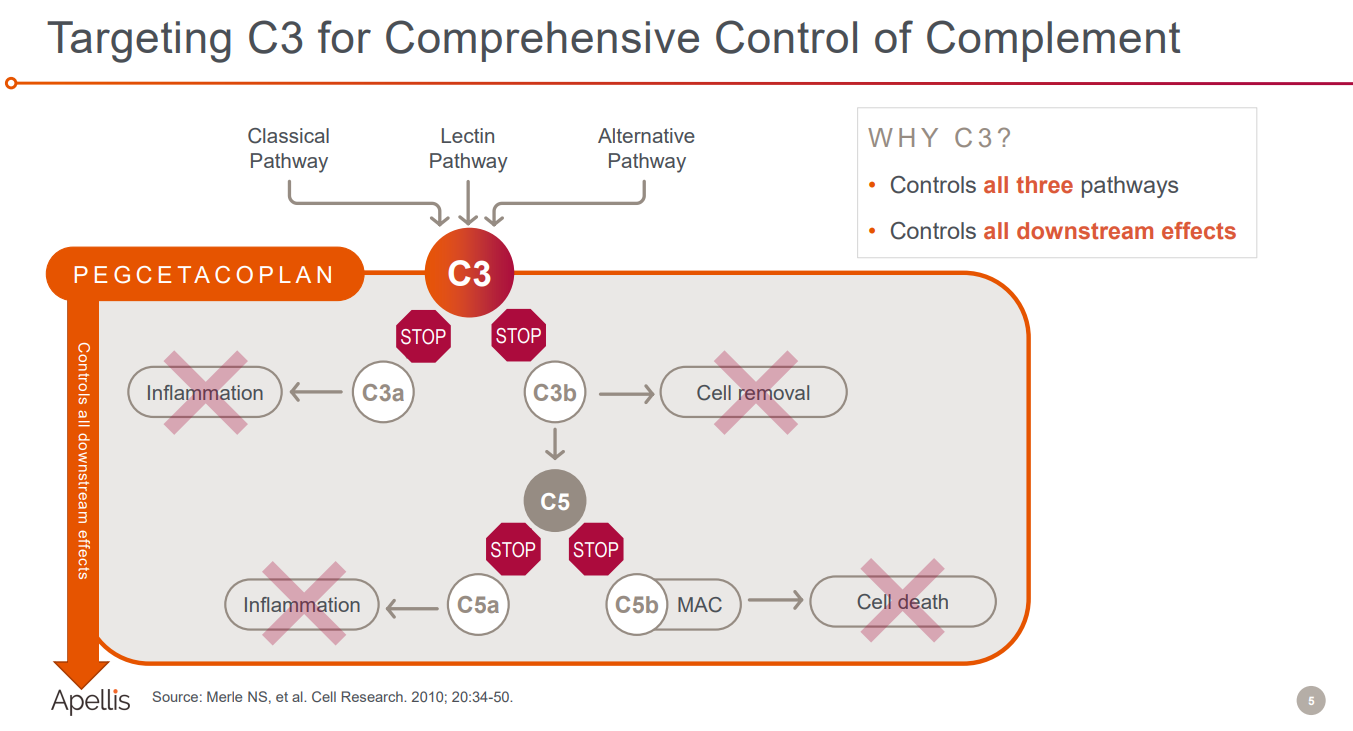 Mr Francois uses the analogy of a river, with complement activation as a waterfall. He describes blocking C3 as like building a dam on the river upstream of the waterfall, and inhibiting C5 as “like standing at the bottom of the waterfall and trying to catch hold of the water”.

According to Apellis, around 70% of PNH patients on C5 inhibitors still have lower than normal haemoglobin levels; notably, around 30% continue to need blood transfusions.

The systemic formulation of pegcetacoplan is due a US decision in PNH by May 14. One big question is whether it will be limited to second-line use after Soliris/Ultomiris off the back of the Pegasus trial, which found that systemic pegcetacoplan improved haemoglobin levels versus Soliris in PNH patients who had previously been treated with Soliris (Pegasus flies for Apellis, up to a point, January 8, 2020).

Apellis is also testing systemic pegcetacoplan in treatment-naive patients in the Prince study, due to read out in the first half of this year. Stifel believes that, initially, a second-line label is most likely, followed by an extension into first-line patients should Prince be positive.

This could explain the lack of enthusiasm over systemic pegcetacoplan among the sellside, at least compared with Soliris and Ultomiris: EvaluatePharma’s 2026 consensus forecast stands at just $498m, versus $1.4bn for the Alexion/Astra products.

PNH is also a field in which competition looks set to increase. A particular threat to systemic pegcetacoplan, which is given subcutaneously twice a week, are oral projects targeting the alternative pathway, further upstream of C3.

Mr Francois concedes that these assets could become pegcetacoplan’s main rivals, but says the Apellis project could still have the edge on efficacy, given that the alternative pathway is one of only three that converge on C3.

He adds that the oral projects are given two to three times per day and that if patients forget to take their pills this could lead to serious issues in a disease like PNH.

In the C3 inhibitor space, pegcetacoplan, also known as APL-2, is by far the most advanced. Amyndas Pharmaceuticals’ AMY-101 is set to go into phase II soon in PNH and C3 glomerulopathy, while NGM Bio’s NGM621 is in a phase II trial in geographic atrophy.

Another question is why, if pegcetacoplan is so promising, Apellis has not yet been bought. Last year the group signed up Sobi to co-develop and co-commercialise the systemic formulation in PNH and other indications – a deal that might have disappointed some investors by apparently reducing the prospects of a full takeout (Another complement factor enters the deal-making frame, October 28, 2020).

Still, Apellis could have another ace up its sleeve: the group has kept hold of the intravitreal form of pegcetacoplan, which is set to yield phase III data in the third quarter from the Derby and Oaks studies in geographic atrophy, an advanced form of age-related macular degeneration.

EvaluatePharma puts 2026 sales of this formulation at $1.3bn, and Apellis is confident of commercialising this asset itself, with only around 3,000 retinal specialists worldwide.

If the group can get a result in GA, where nothing else has worked so far, takeout talk should only increase.

Biohaven hopes to give Allergan a headache