A capsule device inspired by the shape of a tortoise’s shell might just be able to deliver proteins orally, and Novo Nordisk is on board. But the tech is still years away from the clinic.

A technology capable of delivering biologicals orally has long been keenly sought by many biopharma groups, but the goal remains stubbornly out of reach. Novo Nordisk is sponsoring some research at MIT that might just be able to pull this off, and has preclinical data on a capsule device showing that it can inject insulin into animals’ stomach lining and lower their blood glucose – thanks to the way the capsules are shaped.

“That’s where the turtle comes into the picture,” says Lars Fogh Iversen, Novo’s senior vice-president of research technologies. “The shape of the turtle, and also the centre of gravity, has been mimicked and modelled to perfection so that the shape and density, the centre of mass of the device, is perfect for absolutely self-righting properties.”

Mr Fogh Iversen is speaking of the leopard tortoise. The shape of this animal’s shell is such that it can flip itself over if it finds itself on its back, and the MIT researchers, led by Robert Langer and  Giovanni Traverso, have taken inspiration from this to develop a capsule that can orientate itself within the stomach to ensure that the right part is in contact with the stomach wall. 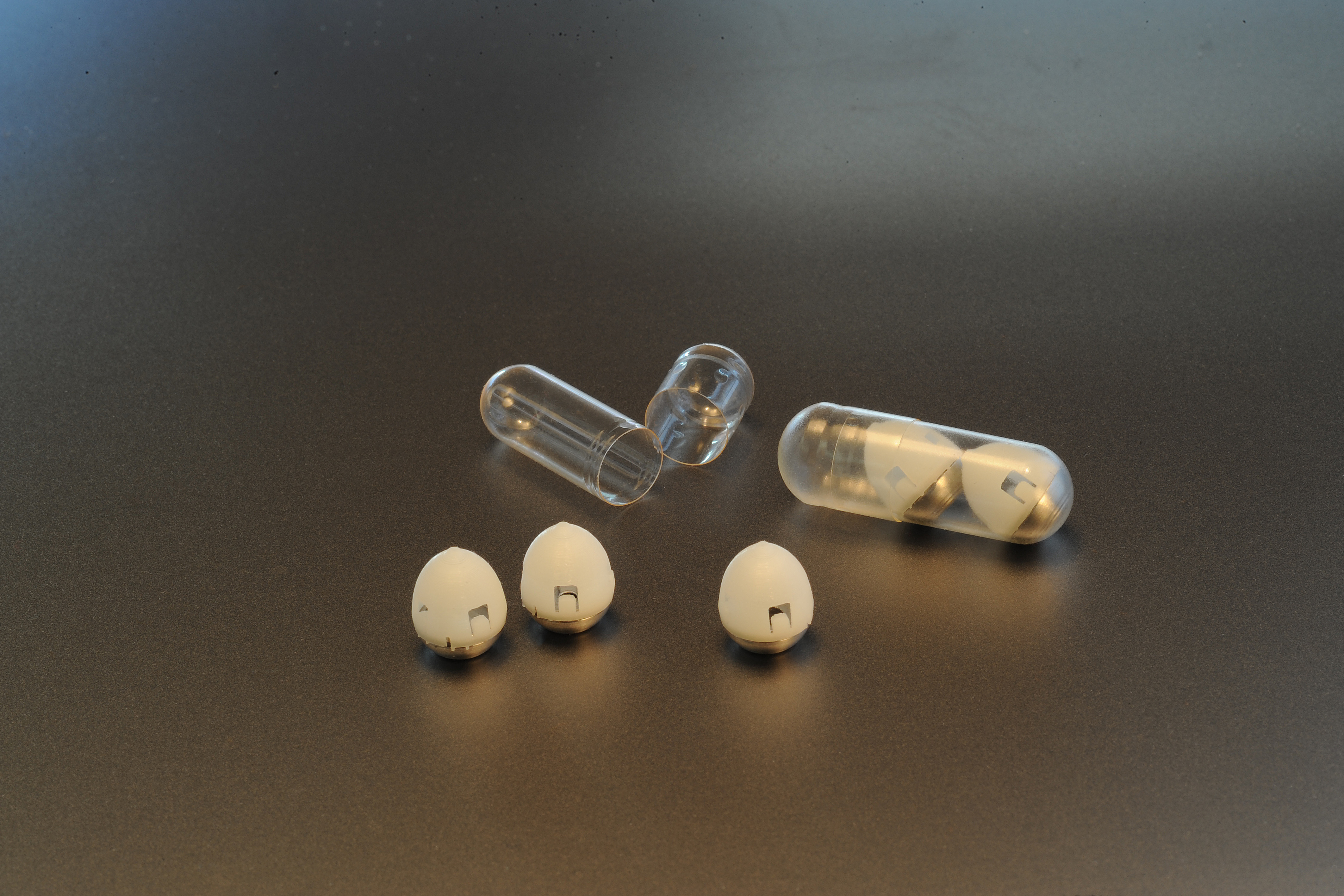 The self-orienting millimetre-scale applicator, or Soma for short, contains a needle whose tip is made of nearly 100% compressed, freeze-dried insulin. This is attached to a compressed spring that is held in place by a disk made of sugar. Once the Soma is in position in the stomach, the sugar dissolves and the needle is injected into the stomach tissue, releasing the insulin into the blood.

“Dosing the device, it will drop into the stomach and it will actuate and insert the needle,” says Mr Fogh Iversen. “Afterwards you can detect very meaningful insulin concentration in the plasma, and subsequently also a glucose lowering effect.”

The capsule measures about 11mm by 8mm, smaller than a capsule of fish oil or a paracetamol tablet.

The research, published in Science today, is promising, but so far only extends to rats and pigs, and sedated ones at that. Mr Fogh Iversen says human trials are still “a few years” away – and might not focus on delivering insulin at all.

“We chose insulin for the preclinical studies because it’s a very easy molecule to detect in plasma, and also to detect the target interaction with glucose lowering,” Mr Fogh Iversen says. “We are entering into a phase now where we have a device we think is working, and now we have to discuss what is the right drug to continue with into human studies.”

Future programmes using the Soma device might look at antibodies for rheumatoid arthritis or even nucleic acid therapeutics, says MIT.

Novo is, therefore, trailing the only other company working towards a swallowed-needle drug delivery device. A year ago Rani Therapeutics raised a $53m venture round to fund clinical trials of its RaniPill, which injects its needle payload into the jejunum rather than the stomach (Rani’s pill injector promises much, but is still preclinical, February 20, 2018).

According to clinicaltrials.gov, a 10-patient study using RaniPill to administer octreotide, a generic peptide growth hormone inhibitor, is to start in April. The control group is subcutaneous octreotide, and the primary endpoint plasma concentration of the peptide over the 24 hours after ingestion or injection.

Mr Fogh Iversen plays down the comparison between the two projects. “I think they are two very different concepts,” he says. “The design of the RaniPill contains a gas to drive the needle insertion and is mechanically very different from what we have.”

But the fact that there are two ingested-needle delivery devices under investigation underlines the appeal of oral delivery of macromolecules. And of course Novo is working on a different, and far more advanced, programme with a very similar aim: its oral form of semaglutide.

The last, and largest, of the suite of phase III trials for oral sema read out last year with overall positive results, and a filing for the GLP-1 agonist is expected in the first half of this year (Novo’s next big diabetes bet heads to regulators, 26 November 2018). The drug uses a transcellular carrier technology Novo has licensed from Emisphere, but Novo’s chief science officer, Mads Krogsgaard Thomsen, told Vantage in December that Eligen only worked for peptides of up to 50-80 amino acids. Any more than that and the molecules are too large to go through the cells.

“That’s why we need a second platform. In general we’re looking into a multitude of technology platforms for oral administration,” Mr Fogh Iversen says.

There are any number of logistical considerations, such as the cost of producing the Soma devices, that will have to be addressed before the therapy becomes viable. But these are problems for the future. Next comes proving the value of these technologies in human trials, and the RaniPill appears to be in the lead – the hare, perhaps, to the Soma’s tortoise.